After 2 Failed Businesses, This Founder Saw the Value in Junk and Built a 260-Unit Franchise Fueled by Veterans

JDog Junk Removal & Hauling founder Jerry Flanagan built his massively successful franchise around the veteran experience in a two-fold strategy that appeals to customers and strengthens the franchise.

One of entrepreneurship’s hallmark characteristics — and most attractive features — is the unconventional lifestyle one can lead when building a business. Those who are used to non-traditional careers may find themselves much more attuned to success in entrepreneurship. Enter: the veteran entrepreneur.

The correlation between military service and entrepreneurship isn’t just observed in theory, but also supported by the numbers. A 2011 study conducted by the Small Business Administration’s Office of Advocacy discovered that military service highly correlated with self-employment probability, finding that veterans were 45% to 88% more likely than those with no active-duty military experience to be self-employed.

JDog Junk Removal & Hauling founder Jerry Flanagan knows entrepreneurship’s allure for veterans all too well. He had spent years in the late 80s and early 90s laying cable for the military, but found the job didn’t exactly translate to a career path when he transitioned to civilian life.

“In the military, you're told what to do. You're required to show up at certain times, and there's really no bending of those rules. So it's very structured and it's actually very secure to you. You have meal plans, you have place,” Flanagan recalls. “It puts a stress on you when you go from being depended on to the so-called real world trying to say, ‘Hey, I just spent a couple of years doing [military service].’ Now I’m in the civilian world, and everyone’s saying, ‘Hey, where's your degree? We need a college degree to hire you.’  And it really put a wall up. It was tough for me because I always felt that I was a hard worker. I could out-hustle everybody.”

"I'm in my early forties, I have no college degree, and I'm having a hard time finding a job to transition to."

Flanagan managed to find a job in retail and operations, but after seven years, he turned to entrepreneurship when he realized he’d rather work for himself. In 1999, Flanagan decided to pursue this entrepreneurial bug by starting a Halloween retail brick-and-mortar. After the business didn’t work out so well, he tried again in 2006, this time with a moon bounce business.

For a while, the business seemed to be doing well — so well, it even managed to franchise to six units. But when the 2008 recession wiped out the company, Flanagan pivoted once again. This time to the home-improvement sector.

“In 2010, I'm trying to figure out what I'm going to do. I'm in my early forties, I have no college degree, and I'm having a hard time finding a job to transition to. So I went on the internet. I found out that improvement businesses do well when the economy is good and when the economy is bad. So I said, ‘I'm going to haul junk,’” he says.

"'They would hire you all day long if they knew you were a military veteran. You should put that on your advertising.'"

In 2011, the veteran launched JDog Junk Removal & Hauling. Today, JDog’s branding touts its military roots with camo-print covered trucks and the army-like clothing worn by employees. But JDog’s military-style appeal actually wasn’t part of Flanagan’s original plan, until a customer commented on it.

“When I started hauling the junk, a customer commented that I was on time. I was clean cut. I said yes, sir, yes ma’am. And they asked me what branch I served in the military. I said, ‘I served in the army.’ They said, ‘You should advertise that you are a military veteran. Customers would use you. They would hire you all day long if they knew you were a military veteran. You should put that on your advertising.’ So I came home and that's what we did.”

The customer's predictions came true. Flanagan says phones “blew up” once he pivoted towards more military-esque branding. In 2012, after realizing that veterans had a high unemployment rate, he started franchising to veterans. Today, the brand has more than 260 franchises across the United States, with all of its franchisees either being veterans or family of veterans.

"Veterans get veterans. We understand each other."

“Veterans get veterans. We understand each other. We've all gone through something very similar. We had signed on the dotted line and risked our lives to support the country. It’s a little bit different than just selling franchises to the average person.  We get each other, we have a different type of humor. It’s kind of a special class to be a part of,” Flanagan says.

The strong work ethic and ingrained values of a veteran make them a lucrative addition for any business, but the veteran experience is unique. In order to attract — and keep — a veteran’s attention, the franchisor says keeping them connected to their community is essential.

“Isolation in the veteran community is really terrible. You need to be around other veterans, whether you're networking or if there's people within that company that you're going to work for, or the business you're going to open up has some type of veteran flavor to it,” he says. “Because veterans really need to continue to serve, whether they're wearing their gear or they're wearing their camo or they're attending veteran-organization job fairs, different things like that. You got to stay connected to the military community.”

"When you get out and you're in the civilian world, you don't have those people around you that have your back all the time." 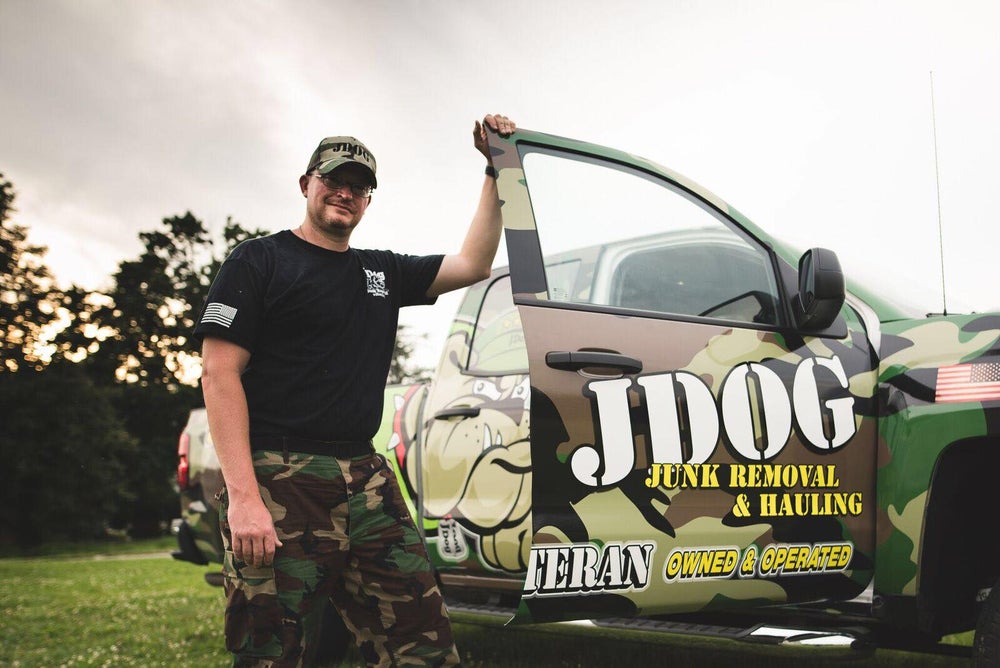 JDog franchisee Joe Yurick lived one such example of an isolating job experience. After transitioning from the military to civilian life in 2004, Yurick experienced culture shock after seeing the unstructured and chaotic nature of the civilian work environment.

“When you get out and you're in the civilian world, you don't have those people around you that have your back all the time. There's not a lot of structures. People that shouldn't be leaders are acting like leaders, and you don't know who to listen to, who not to listen to,” he says.

The veteran bounced around from being a truck driver to sales to the concrete industry, but he never found a place where he “celebrated the fact he was a vet.” After a chance mixer for the JDog Hauling franchise in 2017, Yurick signed on and now heads Southern Lancaster county’s JDog territory in Pennsylvania.

For the self-proclaimed “vetrapreneur,” signing on to the franchise brought back the sense of brotherhood that had been missing for years prior. Despite being a first-time franchisee, he was encouraged by the fact that buying into the franchise also meant buying into a community that’s eager to help and understands his experiences.

Related: 3 Tips for Hiring Veterans and How They'll Help Your Business Thrive

"Our motto is respect, integrity and trust. And that's how we treat every job."

Besides working with other veteran franchisees, Yurick is also able to help his community by employing veterans. His three-person team includes Mark Lukanski and Giovanni Rivera Jr., who, despite each coming from a different generation, all understand each other because of their military experience.

The trio’s bond not only makes for efficient workflow, but also for entertaining television. Their junk removal missions can be watched on Discovery Channel’s Operation Hidden Treasures, where the crew is constantly tested with challenging junk removal jobs.

Despite all of the fame that may come with a television show, Yurick says the most rewarding part of the job is being able to use some of the removed items and give them to other veterans. This ecosystem of veterans helping other veterans keeps stuff away from landfills and keeps the brand aligned with its goal to help veterans in every way possible.

And when companies embrace the role veterans can play in their business, customers see it too.

“Our motto is respect, integrity and trust. And that's how we treat every job. Not that most people don't act like that, but in the military you're kind of pounded those values. And we show that every day," Yurick says. “It automatically gives people a sense of respect and appreciation for what you do.”