Leading entertainment company Disney (DIS) is rebounding from pandemic-induced disruptions but is still being impacted by several operational challenges. DIS’ shares have declined more than 25% in price this year....

By Subhasree Kar May 6, 2022
This story originally appeared on StockNews

Leading entertainment company Disney (DIS) is rebounding from pandemic-induced disruptions but is still being impacted by several operational challenges. DIS’ shares have declined more than 25% in price this year. So, also considering the company’s political conflict with Florida, is now the right time to scoop up DIS shares? Let’s discuss.

Leading American multinational entertainment and media conglomerate The Walt Disney Company (DIS) in Burbank, Calif., operates through two segments–Disney Media and Entertainment Distribution and Disney Parks, Experiences, and Products. The company has managed a solid comeback from pandemic-induced disruptions. DIS’ parks, experiences, and consumer products division generated $7.20 billion in revenues in the fiscal first quarter ended January 1, which was double the $3.60 billion it generated in the prior-year quarter. Furthermore, Disney+ subscriptions beat estimates. The company added nearly 12 million Disney+ subscriptions in the first quarter, while the service saw average revenue per user (ARPU) in the U.S. and Canada grow to $6.68 per month from $5.80 a year ago. Although the operational improvement is significant, DIS’ international locations continue to be impacted by mandatory capacity and travel restrictions. And its television and film productions are still experiencing disruptions in their pipeline.

The shares of this Burbank, Calif.-based media giant have slumped 35.9% in price over the past six months and 27.3% year-to-date to close yesterday’s trading session at $112.61. Adding to the slide was the streaming giant Netflix Inc.’s (NFLX) earnings release that showed a loss of subscribers for the first time in more than a decade, which made investors anxious about consumer spending and near-term prospects of the streaming market.

DIS is currently focusing on transforming and introducing new attractions at its theme parks and entertainment offerings. The company is set to unveil one of the world’s most expensive roller coasters this month at its Epcot theme park. 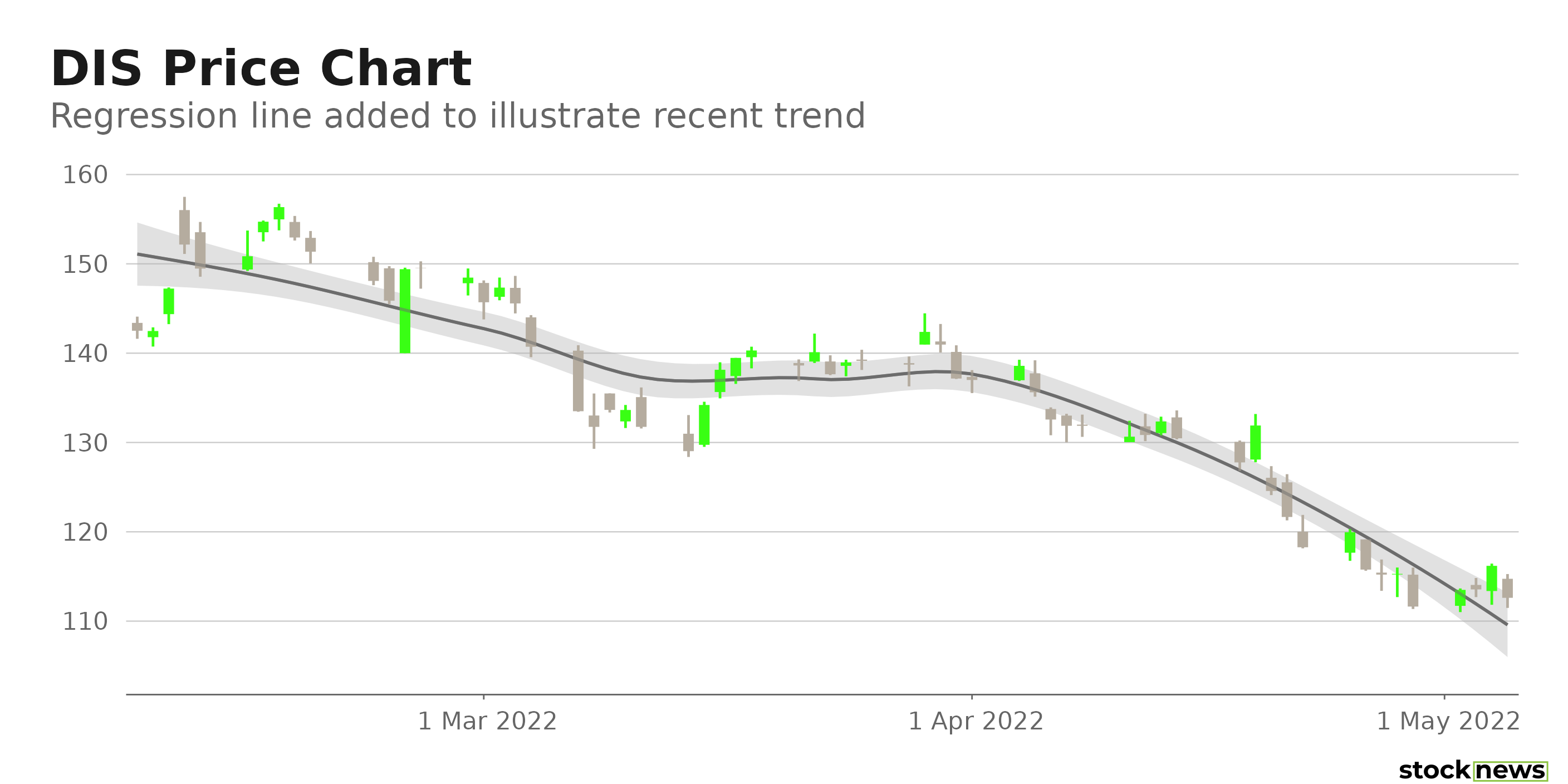 Here is what could shape DIS’ performance in the near term:

Last month, Florida Gov. Ron DeSantis signed into law a bill dissolving DIS’ special district status in the state that allows the company to act as its own government within the outer limits of Orange and Osceola counties. This has set up a legal battle. The bill would see the Reedy Creek Improvement District dissolved. However, DIS’ self-governing special district argues that Florida’s move is not legal unless its bond debt is paid off. It requires paying off billions-plus in debts. It claims that dissolving the special tax district would violate a pledge by Florida to bondholders. These issues could make DIS a risky bet until a legal settlement is reached.

For the fiscal first quarter ended Jan. 1, 2022, DIS’ revenues increased 34.3% year-over-year to $21.82 billion. Its operating income grew 144.6% from its  year-ago value to $3.26 billion. Also, its net income from continuing operations came in at $1.15 billion, indicating a 3,872.4% increase from the prior-year quarter. The company’s adjusted earnings per share rose 231.3% year-over-year to $1.06. However, DIS’ cash flow from operating activities stood at negative $209 million compared to its $75 million year-ago value, while its cash, cash equivalents, and restricted cash balance decreased 15.3% year-over-year to $14.49 billion. Also,  its free cash flow came in at a negative $1.19 billion, compared to a negative $685 million in the prior-year quarter.

DIS has an overall C rating, which  translates to Neutral in our proprietary POWR Ratings system. The POWR Ratings are calculated considering 118 distinct factors, with each factor weighted to an optimal degree.

The stock has a grade of D for Value, consistent with its stretched valuation.

DIS also has a C grade for Stability, in sync with its beta of 1.16.

Of the 21 stocks in the F-rated Entertainment - Media Producers industry, DIS is ranked #9.

Beyond what I have stated above, one can also view DIS’ grades for Quality, Growth, Momentum, and Stability here.

The entertainment company is rebounding from the COVID-19-led slowdown. However, the company still expects its operations to feel the brunt of the COVID-19 disruptions. Also, the political conflict with Florida could make investors anxious. Although DIS’ worldwide popularity and decades-long history in the entertainment space make it an attractive choice for investors,  I think it could be wise to wait for the company’s legal issues to stabilize and further operational improvement before investing in the stock.

How Does the Walt Disney Company (DIS) Stack Up Against its Peers?

While DIS has an overall POWR Rating of C, one might want to consider taking a look at its industry peer, News Corporation (NWSA), which has a B (Buy) rating.

The post Down More Than 25% in 2022, Is Now a Good Time to Scoop Up Shares of Disney? appeared first on StockNews.com