From the "Why didn't I think of that?" file: Learn how this 21-year-old entrepreneur made more than $1 million in five months.

Take one college-bound student with an overdrawn bank account and one 20-minute brainstorming session on how to raise money to pay for school, and what do you get? A million-dollar idea that's had people around the world slapping their foreheads and muttering "Why didn't I think of that?" ever since.

With only one month to go before he was to begin classes at a three-year university--and no money in his bank account--Alex Tew was determined to find a way to avoid student debt. Armed with a notebook and pen, Tew stayed up late one night brainstorming ways to make some quick cash.

To help jumpstart his creativity, he wrote down just one question on his notepad: How can I become a millionaire? Twenty minutes later, he had his answer: Sell one million pixels of advertising space on a website for $1 each. "I thought, 'This is one of those crazy, quirky ideas, but it just might work.I've got nothing to lose.' "

A Runaway Idea
Tew already had some experience with website design, so with a paltry $100, he quickly bought a domain name and some basic web hosting services and had his website, MillionDollarHomepage.com, up and running in two days.

The concept was simple: Businesses could buy 10x10 or larger blocks of advertising space for a $1 per pixel and place their logos and links on his site. Tew knew no one would be interested in buying pixel space if he didn't get the ball rolling, so he convinced some family and friends to chip in to buy the first 1,000 pixels. He also thought it would be a good story for the media to pick up--"Broke student has quirky way to raise money for college"--so Tew took the money he made from the first 1,000 pixels he sold and used it to write and send out press releases to the local media near his hometown of Cricklade, England (about an hour and a half west of London). 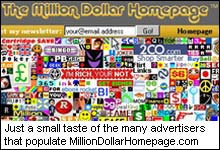 The UK media quickly took the bait, but what was even more remarkable--and proved to be the most effective marketing tactic--was that bloggers, online forums and chat rooms also began to embrace the story. Word of mouth through all the varied media attention quickly snowballed, and within two weeks Tew had sold $40,000 worth of pixels--enough to cover his entire three years of college. It didn't take long before media in 35 other countries got wind of Tew's million-dollar homepage idea. In just five months, Tew reached his goal of selling a $1 million worth of pixels. In the past two weeks alone, he's received close to 4 million unique hits.

Part of that traffic was due to his exposure on eBay. With only 1,000 pixels left to sell on his site, he had hundreds of people wanting a piece of internet history. "I thought the only way to logically meet some of that demand without starting another page was to put the last 1,000 pixels [up for sale] on eBay."

On January 11, the winning bid of $38,000 bought the last ad space on his site, putting him well over the million-dollar mark. "I've spent probably about $40,000 maintaining the site and publicizing it, so there's been some degree of expense to keep it going. But still--it's a healthy profit at the end of the day."

Learning to Adapt
If it sounds like Tew skipped all the way to the bank with his 20-minute idea, think again. A large part of his success is hugely owed to his ability to quickly find solutions and adapt to the many problems that unexpectedly popped up during the past five months.

"It's been quite overwhelming because everything has just blown up in such big ways that I never really prepared for," Tew says. "I had to adapt quite quickly due to the sheer volume of interest."

One of the first problems he encountered was that his website wasn't equipped to handle the volume of traffic he began receiving. In the beginning, he had to manually upload every single image and all the links himself. As hundreds of orders began pouring in, though, Tew was forced to hire two people to help maintain the website's database and deal with customers.

The next major problem was that PayPal blocked his account. (PayPal's anti-fraud policy automatically blocks accounts with high volumes of transactions in order to avoid money-laundering schemes.) Tew was forced to quickly come up with an alternative payment method to keep up with the volume of orders he was receiving. Within three hours of PayPal going down, Tew had found a replacement. And although PayPal eventually enabled his account again, Tew kept both payment options open to prevent a similar problem in the future.

Tew also had to learn to release control to others. "In previous projects, I've wanted to do everything," he says. "With this, I had no choice but to get other people involved." So he enlisted the help of family and friends and even a PR person in the United States to deal with the international media. Tew adds, "I've learned the value of letting other people take responsibility for different aspects of the business."

The Next Step
For now, Tew is deferring his college degree until next September in order to take time to reassess his career path to determine which direction he really wants to go. "I've had a lot of job offers from some of the hugest internet companies, but I think my long-term future is going into business to do my own thing."

In the meantime, Tew plans on donating a portion of his site's profits to a local UK charity that helps young people start their own businesses. The same charity once helped him secure a $3,500 loan to do music-related projects.

"It'll be nice to give something back," he says. "And if I can be anything of an inspiration to other young people wanting to start businesses, well, that's a good thing as well."

A Young Entrepreneur's Advice
Just 21 years old and already an experienced entrepreneur, Alex Tew has some sage advice for anybody looking to start their own business.