Co-Working NYC: An Inside Look at WeWork Labs

By Ben Murray and Grace Handy
May 6, 2013
Opinions expressed by Entrepreneur contributors are their own.

Editor's Note: This post is part of our two-month-long series on co-working spaces. Stay tuned to YoungEntrepreneur.com for more updates.

WeWork Labs has been home to user-generated news site Reddit, crowdsourced review app Consmr and Pricing Engine, an advertising tool for small businesses that just raised $1.5 million in a Series A round. With three co-working spaces in New York, Los Angeles and San Francisco and another opening in NYC's Financial District this summer, we wanted to get a glimpse of the WeWork Labs' environment.

Space lowdown: Located at 175 Varick Street in New York's SoHo neighborhood, WeWork Labs' space encompasses the entire 20,000 square-foot fourth floor in a modern, spacious office building. Amid the rows of desks and private offices, the co-working space has a bit of a fraternity vibe to it with its foosball table, pinball machine, couches, big-screen television and beer tap.

The back story: Early in 2011, friends Jesse Middleton and Matt Shampine were each working on separate startups in New York City. Despite being in different stages of development, they were both looking for space to launch their companies. The lower cost and convenience of co-working spaces intrigued them, but they didn't want to be surrounded by just anyone. 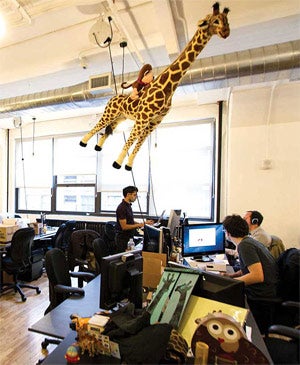 Their idea? An office for pre-funded young companies whose staffers have specific skills, such as technological expertise or higher-level business knowledge, which could benefit other companies in the space.

To turn this vision into a reality, they connected with Adam Neumann, founder of a commercial real estate firm called WeWork. Not only did Neumann offer the young entrepreneurs space, he also signed on to furnish it. On day one, WeWork Labs was completely booked.

The Scoop: With space for only 250 entrepreneurs, the current waiting list hovers around 1,300 pending applicants. So what's the best way to get in? "Get to know people. Come to our events," Middleton says. "It's not about how many people I can squeeze in. It's about how well you fit."

Who's There: The startups at WeWork Labs range from gaming and fashion to fitness and travel companies. Although the space isn't dominated by one specific niche, Middleton says they try to maintain a balance of creative, business and technology teams.

Cost: Single desks will set you back $400 a month, while office spaces — ranging from two-person to eight-person rooms — start at $1,400.

Thinking this is the ideal place for you to get your startup off the ground? Apply at WeWork Labs to try and nab a coveted spot.