Some parents of college students are opting to buy properties for their children versus spending money on room and board, and out-of-state tuition.

It might seem rather generous to buy your 18-year-old a condo or townhouse. But parents like Khalfani-Cox are finding that it saves them money in the long run.

Khalfani-Cox bought her daughter, who attended the University of Texas at Austin, a $210,000 condo instead of paying the university for room and board. This strategy saved her family an estimated $30,000 on room and board in the three years of college her daughter lived in the condo, plus $40,000 on out-of-state tuition during her daughter's junior and senior years, once she'd become an in-state student by living locally and qualifying for lower, in-state tuition.

Plus, Khalfani-Cox was able to charge rent. Each month, the rent from her daughter's two roommates paid the mortgage in full. After graduating last year, her daughter still lives in the Austin area -- but even if she decided to leave or does in the future, there is still an opportunity for rental income.

"My daughter's credit score is in the high 700s, and that's rare for somebody right out of college," Khalfani-Cox said. She continued, "Because it worked so beautifully, we said, 'Let's do the same thing with our son.'"

Related: 22 Ways for College Students to Make Money on the Side

'Kiddie condos' are showing up in US college towns

Some realtors call this strategy buying a "kiddie condo," named after an FHA loan that allows parents to help their children buy their first home even if they won't be living there. The idea behind the strategy is to put the money a family would generally spend on college expenses like room and board, required meal plans, and out-of-state tuition into a property. Add that savings to the benefits of getting rental income, helping your child build credit, and helping them to establish a stable place to live, and the numbers might start to seem justified.

In areas where property costs are relatively low, real estate markets are hot, and state laws are friendly to college students wanting to establish residency, it's becoming a popular idea that both parents and schools are recognizing.

One such place is the University of Florida in Gainesville, where the median sale price for a home is about $180,000, and there are plenty of condos near campus.

"It's been a popular concept ever since I become a realtor in 2004," realtor Matt Price of University Realty told Business Insider in an email. "I think it has likely become more popular each year, since the rental rates at apartment communities near UF have increased, which makes buying a condo an even more attractive concept," he said.

He adds the school has even acknowledged its many off-campus condo dwellers, expanding the school bus lines to serve some of the condo communities where he's sold homes. He estimates that he and his business partner have sold over 1,800 condos combined since 2004, and says that a majority of those he currently has listed for sale will be bought for this purpose.

Related: 4 Ways to Save on Taxes When Selling Property 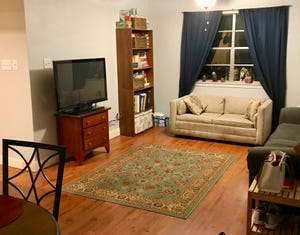 The condo Lynnette Khalfani-Cox bought her daughter to live in during college in Austin, Texas.
Image Credit: Courtesy of Lynnette Khalfani-Cox
A similar pattern is happening near University of Texas at Austin. Real estate agent Mark Kolbe, who specializes in the UT Austin area and helped Khalfani-Cox's family with their condo purchase, says renting to college students is a stable market regardless of what the greater Austin economy looks like. "You basically have a steady influx of students who are very stable renters," says Kolbe. "The nice thing about students is that they don't have income necessarily, but they have guarantors in their parents." And stability, he says, is the key to a good rental investment.

That said, being a landlord isn't for everyone. But this method still works, as properties near universities are also usually an easy sell. "Generally, they're looking at a pretty reasonable appreciation on the property from when they purchased it and can just turn a nice profit on the resale," says Kolbe.

Kiddie condos aren't the right move for everyone

But, there are some scenarios where buying a condo to cut back on college expenses doesn't exactly make sense. "It's not good for people who have a scholarship, especially people who aren't paying anything," says Kolbe. Students whose room and board are covered by the school would be paying more should they buy off-campus real estate.

Additionally, there are some legal factors, including how easy it is to get residency in a state, that could stand in the way.

It worked well for Khalfani-Cox's daughter because she truly intended to stay in Austin and make it a full-time residence, even after college. It can be more difficult, if not impossible, to establish residency for a student if they don't have intent to stay after graduation and make a life in the state.

And some states just don't allow it.

"It's come up a few times where I've talked to people who said, 'well we tried to do this with our other son who went to school in Pennsylvania' and they just said it would not work," says Kolbe. "In Pennsylvania, New Jersey, and California ... there are a lot of states that seem to be a lot more difficult about the establishment of residency."

Related: 9 Tips for Starting Your Business in College

In Pennsylvania, laws require that a student be 21 years old and have a reason other than school to live there to claim residency. To establish residency in California, any student under age 24 must be able to verify that they've been financially independent for two years prior to the term they want to enroll in college. In states with laws like these, kiddie condos may not be possible.

Kolbe suggests working with a realtor who's familiar with both the university area and the state's residency laws. There's a lot that could go wrong if the proper research isn't done. But if everything works out, like it did for Khalfani-Cox's family, there's a lot to be earned.