YouTuber Fidias Panayiotou said he will stay outside Elon Musk's offices until he gives him a hug.

YouTuber Fidias Panayiotou has been documenting his mission to hug Elon Musk on TikTok for the past 47 days.

The first videos showed the 22-year-old camping outside the SpaceX Launch Facility in Boca Chica, Texas, dressing up in costumes and waving a sign saying "searching for Elon Musk" to get its CEO's attention.

In a video posted to Twitter on October 8, Panayiotou said he had spent the past year making a video where he had hugged 99 celebrities, and he wanted the 100th hug to be with his "favorite person in the whole world, Elon Musk."

In a follow-up post on November 20 — after Musk made headlines following his controversial take-over of Twitter — Panayiotou said he loved Musk because "he is an intellectual" and he "speaks his truth."

Only @elonmusk can watch this video pic.twitter.com/CVX3uOsEwF

While camping outside SpaceX, Panayiotou engaged in multiple stunts including dressing up in a Spider-Man costume and arranging a crowd to stand in a formation that spelled "HUG FIDIAS."

On November 16, Panayiotou shared a TikTok where he said he had asked his followers to "go spam" Musk's mother, Maye, to tell her son to hug the YouTuber. It's unclear where the comments were made and no such post is currently visible on his Instagram or TikTok accounts.

Maye responded on Instagram and Twitter, accusing him of being "malicious" and saying she received "over 500 spams" as a result. 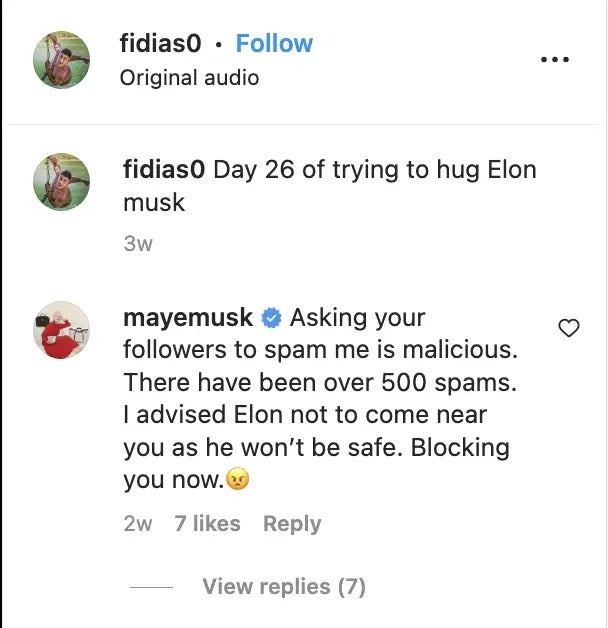 Musk replied to his mother's tweet with a smiling face and open hands emoji which is often interpreted as representing a hug.

Some users criticized Panayiotou's behavior, with one person saying the constant updates were "disturbing on so many levels." Another tweet said, "it's weird the way the internet normalizes strange behavior."

Panayiotou apologized for asking his followers to send spam comments but continued his mission. He moved from outside SpaceX to the Twitter headquarters in San Francisco, California, where he recorded a video saying security had called the police, and showing what appeared to be a police officer telling him if he entered the building he would be arrested for trespassing. (Neither Twitter nor the San Francisco Police Department responded to Insider's request for comment.)

On December 5, day 46 of the campaign, Panayiotou uploaded a TikTok suggesting he'd received comments that said he was harassing and stalking Musk. It included a clip of Musk saying he bought the name Tesla from a man in Sacramento for $75,000 after sending the "nicest guy from the company" to go "sit on his doorstep and not leave until he agreed to sell it to us."

According to the California penal code, stalking occurs when a person "willfully, maliciously, and repeatedly follows or willfully and maliciously harasses another person and who makes a credible threat with the intent to place that person in reasonable fear for his or her safety, or the safety of his or her immediate family." It can carry a fine of up to $1,000 and imprisonment of up to a year.

On day 47, Panayiotou said in a TikTok he had been approached by one of Musk's bodyguards who said they could not allow the hug with the CEO as "hundreds of people will come outside Twitter and ask him for stuff."

Panayiotou told Insider he will continue the campaign "until I die" and even if 100 days pass he will not stop. He said he's aware that what he's doing is "annoying" but he is "persistent" and added, "I am doing this to show him love."

Panayiotou has over 1 million YouTube subscribers, where he often posts outlandish challenges, including shaking hands with the top 100 YouTubers and living in an airport for seven days.