The Late Founder of Hawaiian Tropic Built an Empire Off His Tanning Lotions. The Beachfront Mansion Where He Threw Celebrity Parties Is On the Market for $5.99 million — Take a Look Inside.

The home has three pools, two bars, and plenty of 1980s flair.

This story was originally published on Business Insider.

Ron Rice, the late founder of Hawaiian Tropic, built an empire on suntan lotions. The Florida mansion where he hosted celebrity parties is now on the market for $5.99 million. 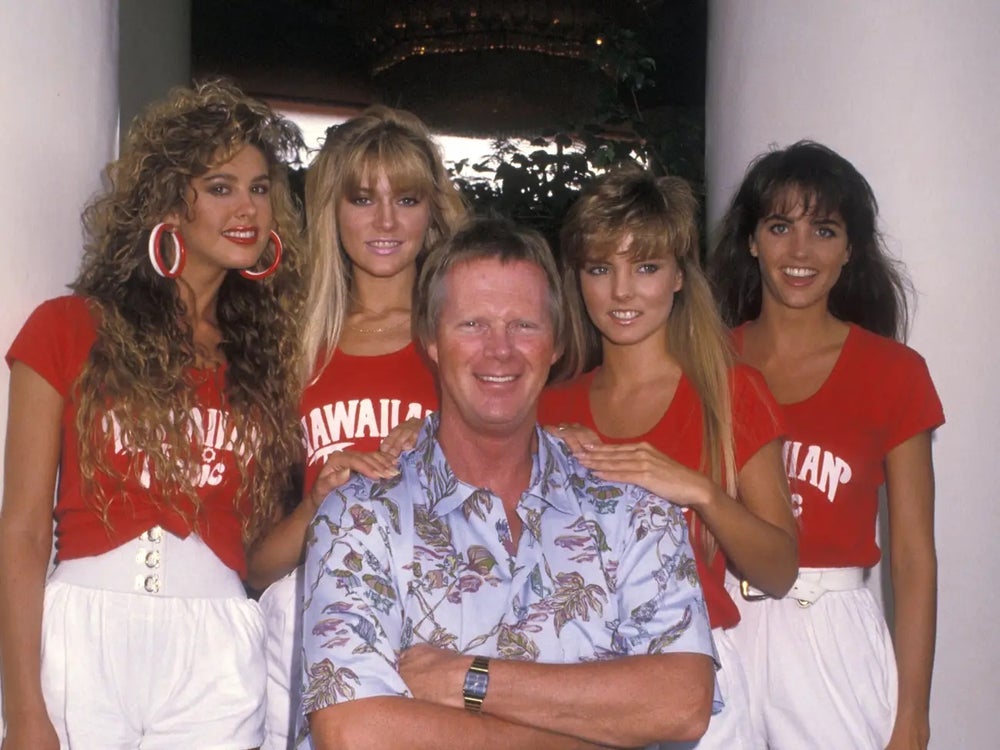 He lived in the house for almost 40 years until his death in May, listing agent Bill Navarra from Realty Pros Assured told Insider. Rice was 81 when he died, per his New York Times obituary.

"There's a northern structure that was built in the sixties and he bought both lots," Navarra said of the property. "And then in 1985, he built the additional main living quarters."

The estate was completed in 1987, per the listing. This is the first time the house has been on the market. 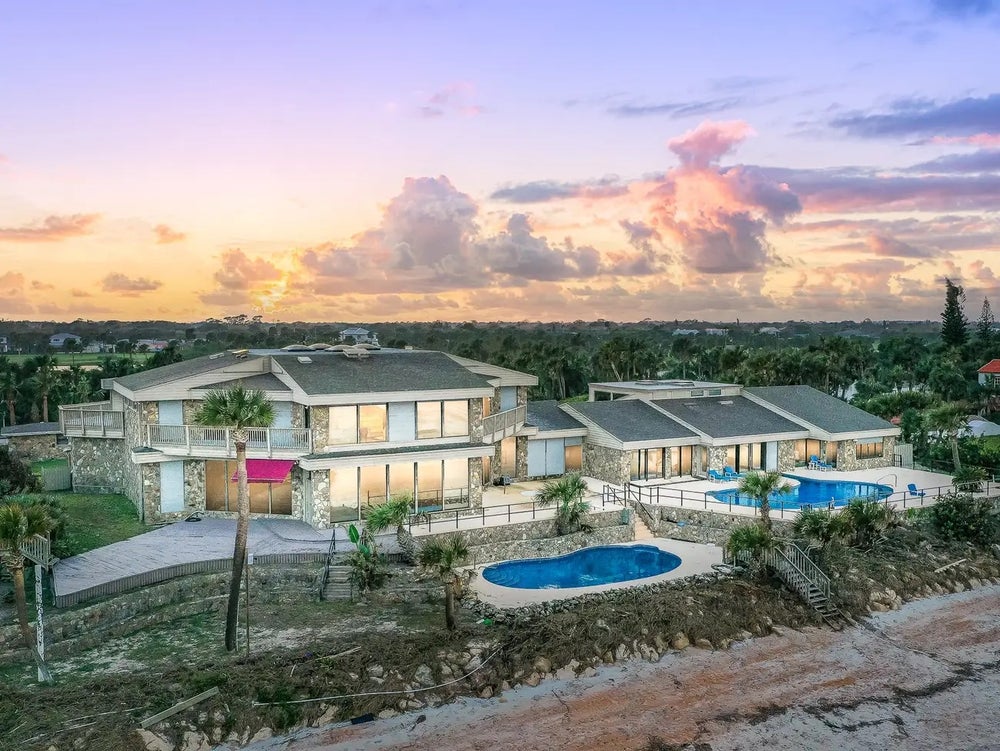 The exterior of the house. HomeFx via BI

Houses in Ormond Beach have a median listing home price of $440,000, per data from real-estate platform Realtor.com. There are currently 448 single-family homes for sale, with prices ranging from $107,000 to $5.99 million — making Rice's estate the most expensive listing in the area.

Rice's estate did not immediately respond to Insider's request for an interview, sent through the listing agent.

Rice grew up in the Blue Ridge Mountains of North Carolina, far from the sea and the sandy beaches associated with his brand. 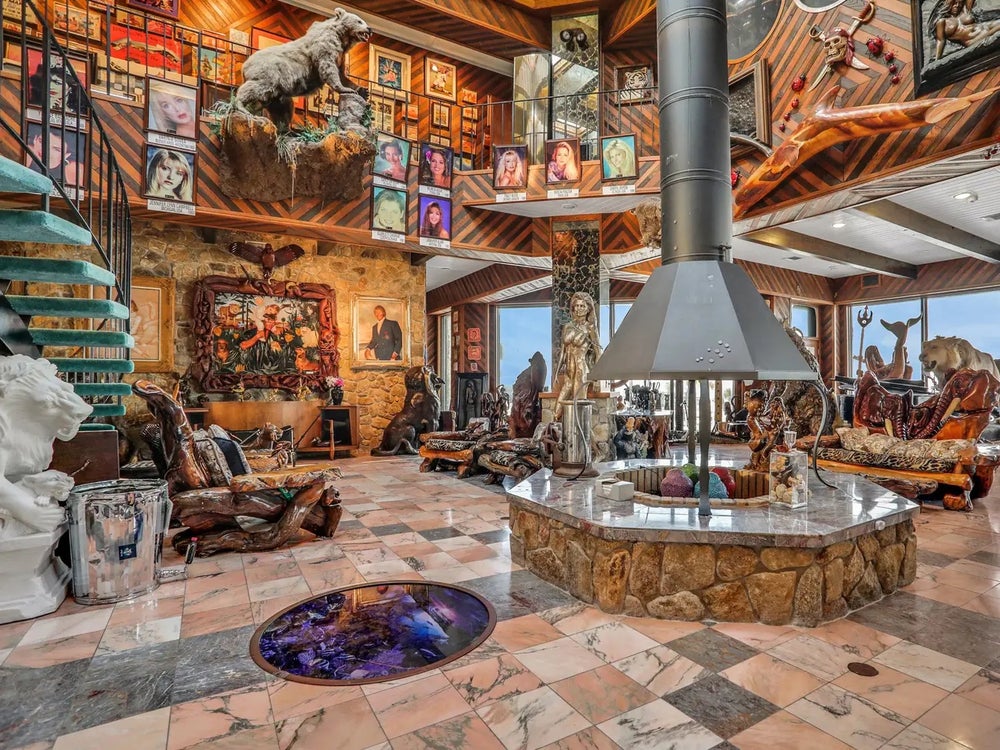 The main living area. Rice put all his favorite possessions on display so he could enjoy them every day. HomeFx via BI

After graduating from college, Rice became a high school chemistry teacher, coached football, and worked as a lifeguard on the side, per the New York Times.

It was during one of his lifeguarding shifts that he had the epiphany to create a product that could rival suntan lotion giant Coppertone, per The Washington Post. In a trash can in his garage, Rice mixed up a combination of oils until he nailed the formula that would eventually become Hawaiian Tropic suntan lotion.

By 2006, Hawaiian Tropic became the second-largest sun-care product company in the world with $110 million in sales, per the New York Times. A year later, Rice sold his company for $83 million. 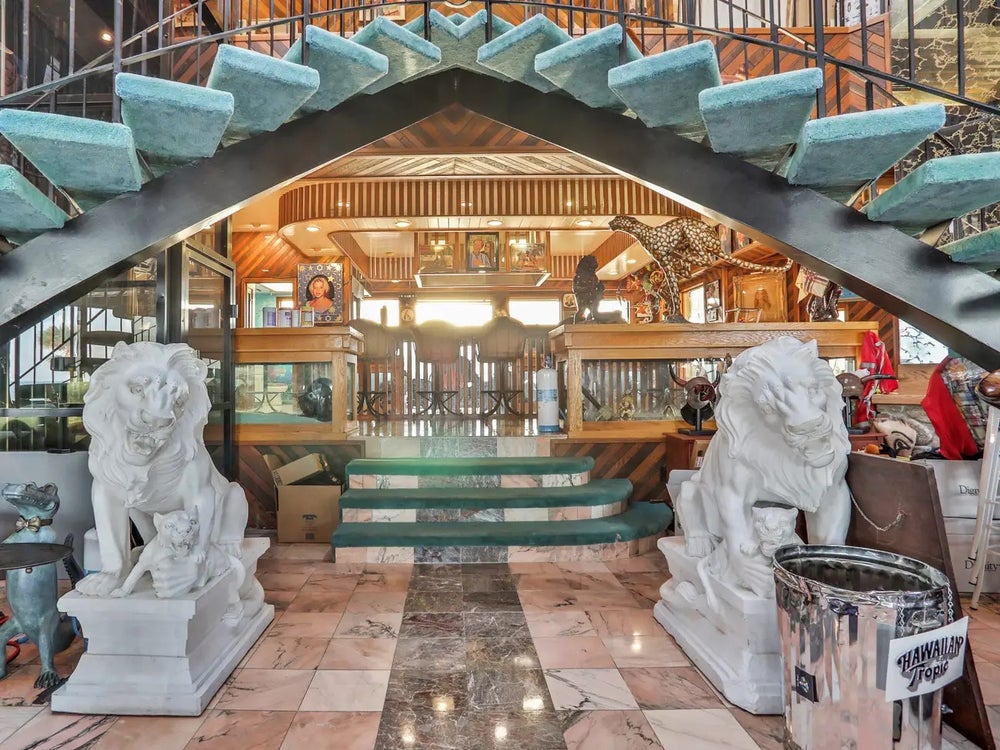 Among the things that Rice kept was the garbage can in which he first created the Hawaiian Tropic suntan lotion formula (bottom right). HomeFx via BI

"He's traveled all over the world and got a lot of gifts from different people he's met through his life," Navarra said. "He wanted to enjoy them every day."

Among the items Rice kept in his living room was the garbage can that started it all, per the New York Times. Only now, he had it plated in silver.

These items are not included in the sale of the house, Navarra said.

While the interiors of the 12,414-square-foot mansion are primarily made out of wood, the stones on the outside of the house were imported from North Carolina, Navarra said. 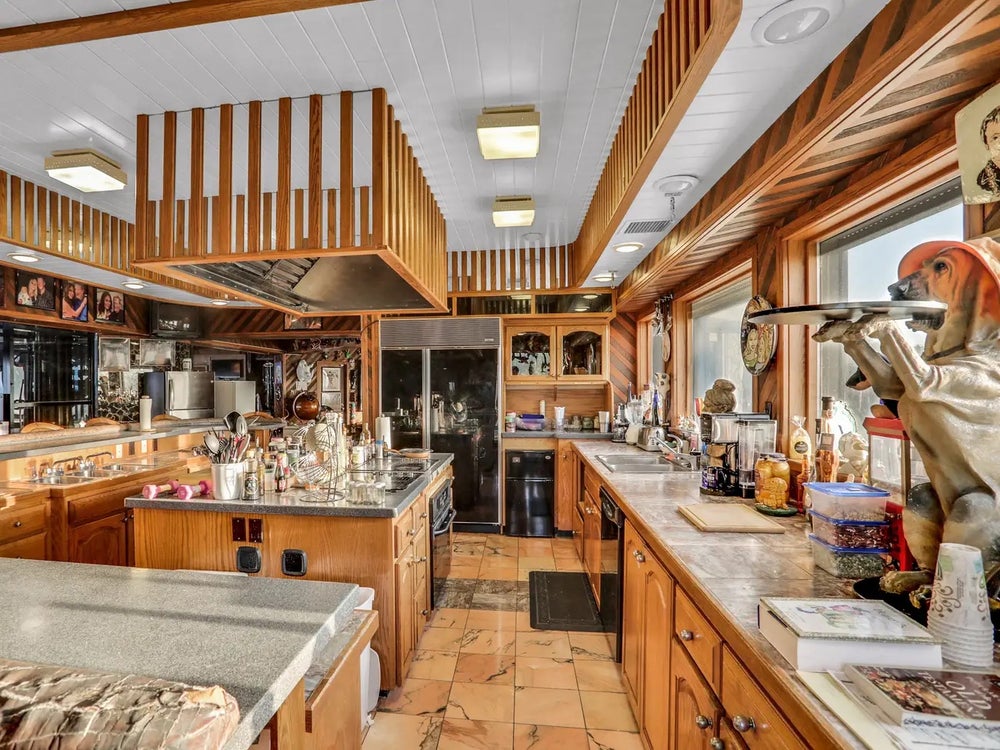 The kitchen area. HomeFx via BI

"Rice did the same thing with the Hawaiian Tropic office in Ormand Beach," Navarra added. 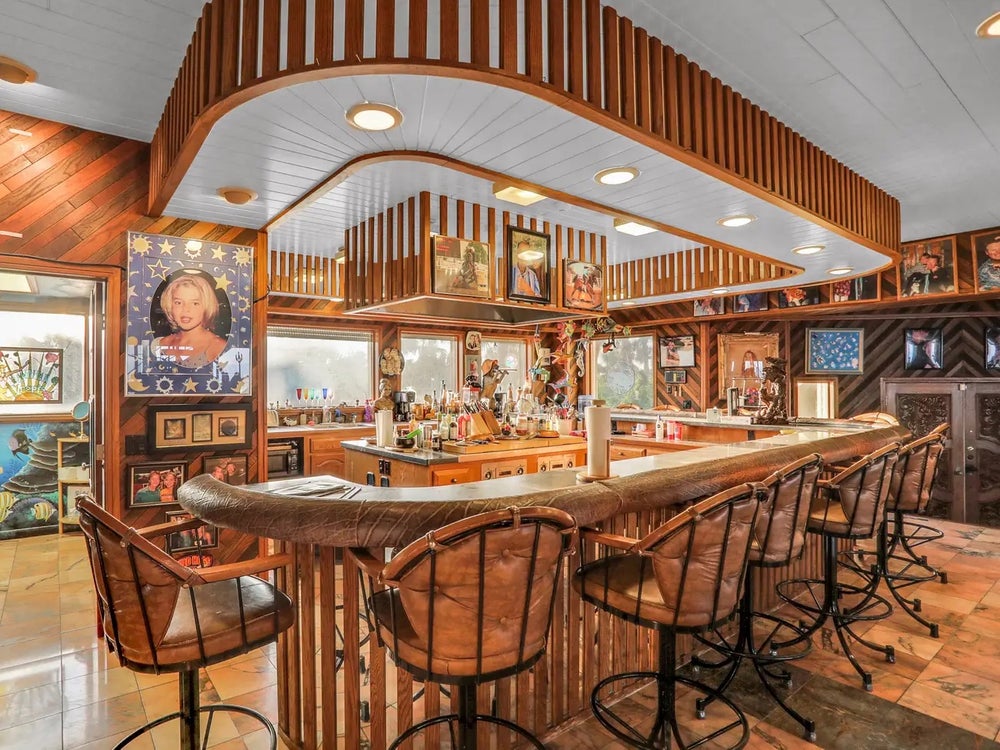 A bar area for entertaining guests. Rice kept framed photos of some of his pageant models around the house. HomeFx via BI

Rice ran the annual Miss Hawaiian Tropic contests from 1983 to 2010, with celebrity judges that included former US president Donald Trump — who met his second wife Marla Maples when she was a contestant, per the New York Times.

Recounting his first pageant, Rice told Knoxville News Sentinel that "it was magic."

"I had unlimited girls … beautiful girls … wanting to be one of our Hawaiian Tropic models," Rice said. "I had to choose, and they were just throwing themselves at my feet to be one of our models."

Rice's other marketing stunts included plastering the brand on a Porsche 935 that Paul Newman drove at the 1979 Le Mans and on a No. 1 Hawaiian Tropic Oldsmobile that racing driver Donnie Allison famously wrecked at the 1979 Daytona 500.

"We were making money hand over fist," Rice told Knoxville News Sentinel in 2020. "We didn't know what to do with it."

Rice's mansion was designed for entertaining, and the founder put it to work. 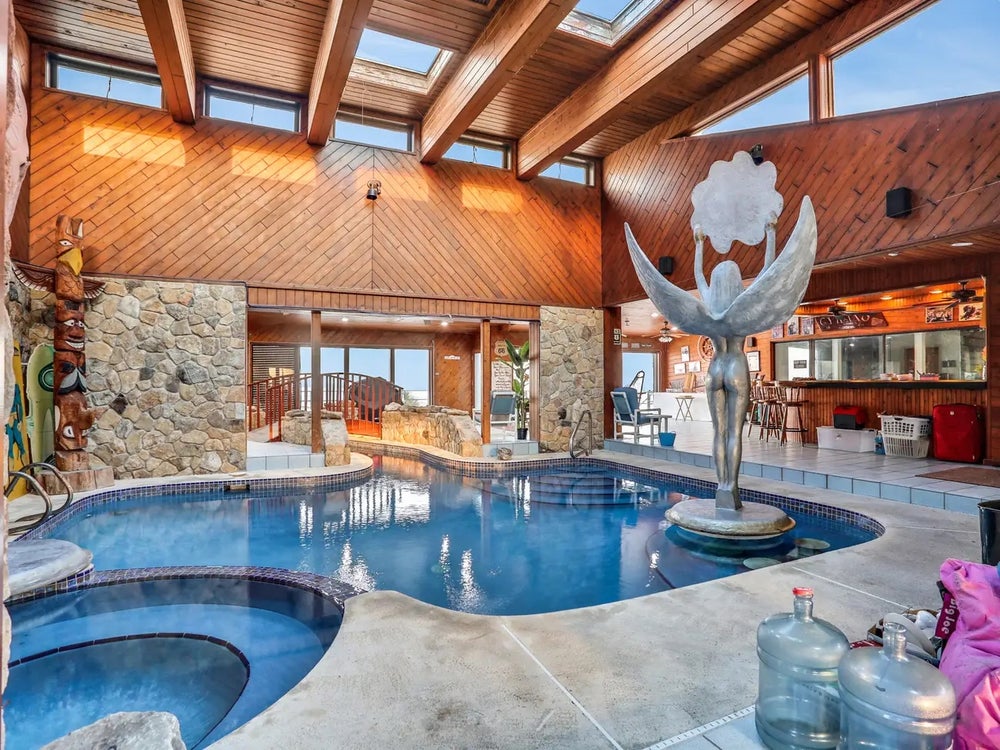 The indoor pool is flanked by two angel statues. It is connected to one of the two outdoor pools. HomeFx via BI

The indoor pool is flanked by two angel statues, and it's connected to an outdoor pool so guests can swim in and out, Navarra said.

Names on Rice's party guest list included celebrities and professional athletes of the day, such as O.J. Simpson, Joe Pesci, and Jerry Lee Lewis, per The Daytona Beach News-Journal.

There are four bedrooms in the house. The primary suite has 180-degree views of the ocean. 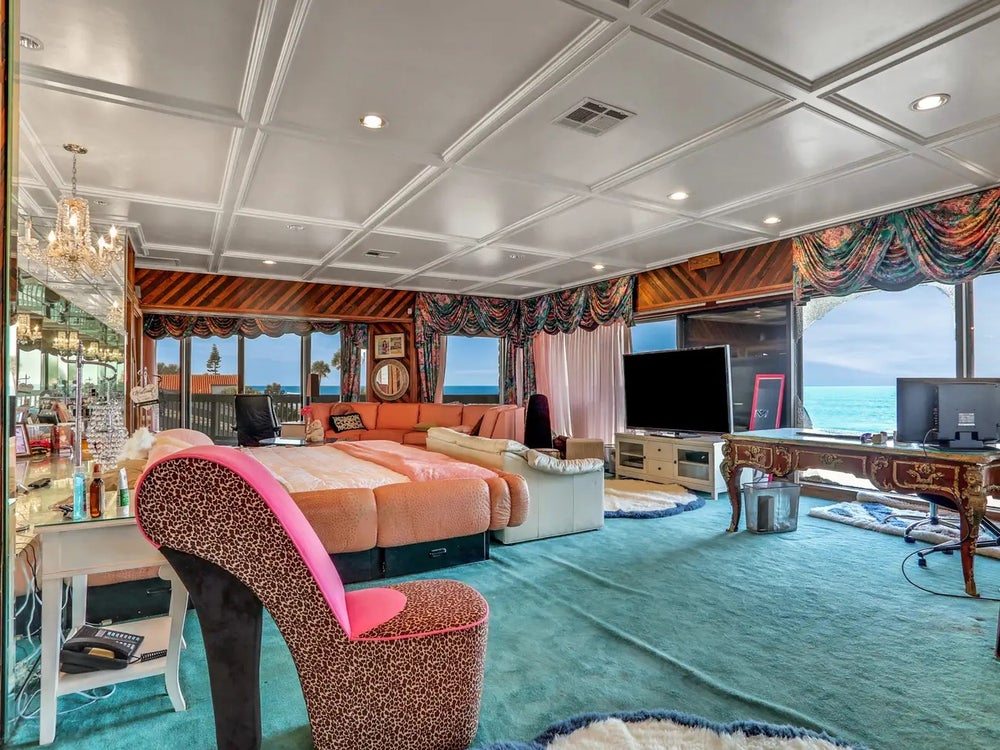 The master suite has unblocked views of the open sea. HomeFx via BI

"I became friends with him over the years of selling real estate with him," Navarra said of Rice. "He had such unique styles of doing business."

There was one occasion when the business mogul had problems getting a local surf shop to carry his products, Navarra said, recounting a story Rice once told him.

"He sent several of his models there, and they all went in and asked for the same product," Navarra said.

Rice ended up striking a deal with the store owner, Navarra added: "And Ron said, from that point forward, that became one of his top-selling surf shops in Daytona Beach."

Navarra says this is the first time he's seen so much buzz about a property. 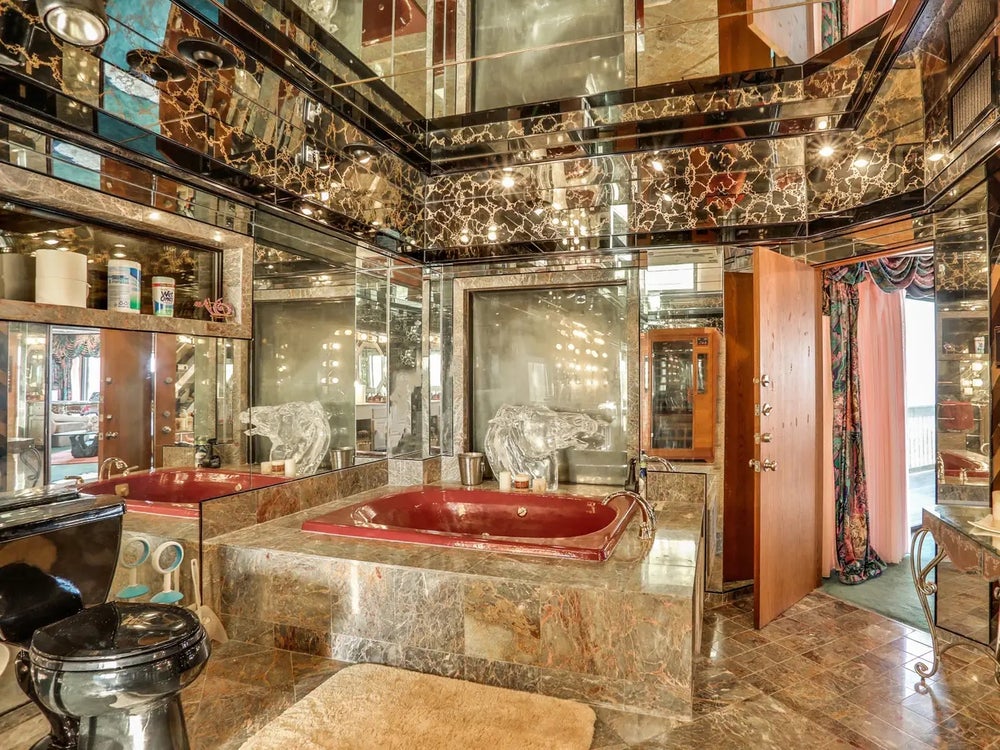 The primary suite bathroom is covered in mirrored walls and comes with a sauna and a jacuzzi.
HomeFx via BI

"I've been doing this for 25 years," Navarra said. "Newspapers, media — I've never seen so much excitement about a house ever before."