How to Stop Lying to Yourself

By James Clear
August 6, 2015
This story originally appeared on JamesClear.com

It was September of 1816 and two Parisian boys were playing in the courtyard of the Louvre, the famous museum in Paris.

On the other side of the courtyard, a physician named René Laennec began to quicken his pace as he walked along in the morning sun. There was a woman with heart disease waiting for him at the hospital and Laennec was late.

As Laennec crossed the courtyard, he looked toward the two boys. One of them was tapping the end of a long wooden plank with a pin. On the other end, his playmate was crouched down with his ear pressed against the edge of the plank.

Laennec was immediately struck with a thought. "I recalled a well-known acoustic phenomenon," he would later write. "If you place your ear against one end of a wood beam the scratch of a pin at the other end is distinctly audible. It occurred to me that this physical property might serve a useful purpose in the case I was dealing with."

When Laennec arrived at the hospital later that morning, he immediately asked for a piece of paper. He rolled it up and placed the tube against his patient's chest. He was stunned by what he heard next. "I was surprised and elated to be able to hear the beating of her heart with far greater clearness than I ever had with direct application of my ear," he said.

Laennec quickly upgraded from his piece of paper and, after experimenting with various sizes, he began using a hollow wood tube about 3.5 centimeters in diameter and 25 centimeters long. 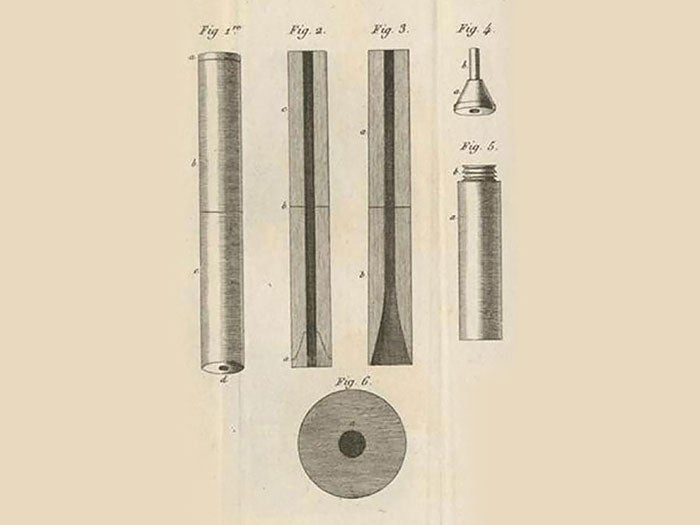 This is a sketch of René Laennec's original stethoscope design, which was essentially a hollow wood tube. The ear piece is featured in the top right corner.
Image credit: US National Library of Medicine

For the first time in history, physicians had a safe, unbiased way to understand what was going on inside a patient's body. They didn't have to rely solely on what the patient said or how the patient described their condition. Now, they could track and measure things for themselves. The stethoscope was like a window that allowed a doctor to view what was actually happening and then compare their findings to the symptoms, outcomes, and autopsies of patients.

And that brings us to the main point of this story.

The lies we tell ourselves

We often lie to ourselves about the progress we are making on important goals.

We use lukewarm phrases like, "I'm doing well with the time I have available." Or, "I've been trying really hard recently." Rarely do these statements include any type of hard measurement. They are usually just soft excuses that make us feel better about having a goal that we haven't made much real progress toward. (I know because I've been guilty of saying many of these things myself.)

Why do these little lies matter?

Related: One Reason Our Brains Love to Procrastinate

Because they are preventing us from being self-aware. Emotions and feelings are important and they have a place, but when we use feel-good statements to track our progress in life, we end up lying to ourselves about what we're actually doing.

If you're serious about getting better at something, then one of the first steps is to know -- in black-and-white terms -- where you stand. You need self-awareness before you can achieve self-improvement.

Here are some tools I use to make myself more self-aware:

Workout Journal: For the past 5 years or so, I have used my workout journal to record each workout I do. While it can be interesting to leaf back through old workouts and see the progress I've made, I have found this method to be most useful on a weekly basis. When I go to the gym next week, I will look at the weights I lifted the week before and try to make a small increase. It's so simple, but the workout journal helps me avoid wasting time in the gym, wandering around, and just "doing some stuff." With this basic tracking, I can make focused improvements each week.

My Annual Reviews and Integrity Reports: At the end of each year, I conduct my Annual Review where I summarize the progress I've made in business, health, travel, and other areas. I also take time each spring to do an Integrity Report where I challenge myself to provide proof of how I am living by my core values. These two practices give me a chance to track and measure the "softer" areas of my life. It can be difficult to know for certain if you're doing a better job of living by your values, but these reports at least force me to track these issues on a consistent basis.

RescueTime: I use RescueTime to track how I spend my working hours each week. For a long time, I just assumed that I was fairly productive. When I actually tracked my output, however, I've uncovered some interesting insights. For example, I currently spend about 60 percent of my time each week on productive tasks. This past month, I spent 9 percent of my working time on social media sites. If you would have asked me to estimate those two numbers before using RescueTime, I'm certain I would have been way off. Now, I actually have a clear idea of how I spend my time and because I know where I truly stand, I can start to make calculated and measured improvements.

A call for self-awareness

Self-awareness is one of the fundamental pieces of behavior change and one of the pillars of personal science.

If you aren't aware of what you're actually doing, then it is very hard to change your life with any degree of consistency. Trying to build better habits without self-awareness is like firing arrows into the night. You can't expect to hit the bullseye if you're not sure where the target is located.

Furthermore, I have discovered very few people who naturally do the right thing without ever measuring their behavior. For example, I know a handful of people who maintain six-pack abs without worrying too much about what they eat. However, every single one of them weighed and measured their food at some point. After months of counting calories and measuring their meals, they developed the ability judge their meals appropriately.

In other words, measurement brought their levels of self-awareness in line with reality. You can wing it after you measure it. Once you're aware of what's actually going on, you can make accurate decisions based on "gut-feel" because your gut is based on something accurate.

In short, start by measuring something.

Related: What I Do When I Feel Like Giving Up