By Cristian Docan
February 23, 2022
This story originally appeared on InvestorPlace

Hydrogen stocks have been beaten over the past year, and the group declined steeply year to date. The Defiance Next Gen H2 ETF (NYSEARCA:HDRO), a fund that works as a proxy of the hydrogen industry, has dipped 31% to Tuesday's close of $13.51 per share since the beginning of the year. In the meantime, the price of Plug Power (NASDAQ:PLUG), a U.S. provider of hydrogen fuel cells, shrank 25% to $21 per share. In spite of that, PLUG stock has remarkable growth potential in the long term.

Yet, Plug Power's insufficient financials should continue to weigh on the company's stock price.

PLUG stock is positioned to capture the growth of the global hydrogen market. According to BusinessWire, the global market size of the green hydrogen market is esteemed to grow by a substantial compound annual growth rate (CAGR) of 39.4% between 2021 and 2025 to $2.94 billion.

To capture this growth, Plug Power has entered into joint ventures with various industries in the past year. These help it accelerate its expansion in the green hydrogen generation business and diversify its offerings.

In Europe, PLUG agreed to work with Renault, a leading automobile manufacturer, to seize 30% of the hydrogen-powered light commercial vehicles market by 2030. The company also partnered with Lhyfe, a French hydrogen producer, to develop green hydrogen throughput.

In Asia, the company finalized a joint venture with SK Group, a major conglomerate in South Korea, to accelerate the use of hydrogen as an alternative source of energy. It also joined forces with Fortescue Future Industries, a leader in the resource industry in Australia, to build a gigawatt factory to produce large-scale proton exchange membrane electrolyzers. Furthermore, in North America, PLUG announced plans to build a green hydrogen plant in California to meet its 2025 target of producing 500 tons per day of liquid green hydrogen.

The company has plenty of projects to grow its business and it is focused on increasing market share worldwide. Nevertheless, the fundamentals of the hydrogen specialist should not please investors, at least in the short term.

Despite Growth, PLUG Stock Is Far From Breaking Even

Plug Power's top line is expected to advance robustly in 2021, reaching $499 million, compared to net sales of negative 100 million in 2020. This was disturbing for the company's business, implying that PLUG's returns, allowances, and discounts outpaced total net sales. Though, the consensus of analysts remains persuaded of Plug Power's top-line growth prospects. They see an esteemed 82.2% surge in fiscal 2022 to $909 million and expansion of 54.6% in 2023 to $1.4 billion.

Despite this solid development, the hydrogen specialist is not expected to reach profitability in the next two years. Indeed, with a net loss of $158 million in 2022 before an improvement in 2023 to $51 million, investors looking for a short-term play should probably pass.

More worryingly, Plug Power's free cash flow is forecasted to continue to dip in 2022 to -$912 million. This poor performance emerges after PLUG's 2021 free cash flow loss was expected to plunge from -$179 million in 2020 to a massive -$713 million last year. The rapid advancement of capital expenditures (Capex) in the past two years mainly explains this deficit. Yet, the hydrogen specialist is not forecasted to decelerate expenditures — as Capex growth should lift by 69.9% in 2022 to $824 million.

Nevertheless, the company's balance sheet looks healthy for the moment, with an expected net cash position of $2.07 billion in 2022, down 33.5% year-on-year. However, PLUG's substantial investments should continue to weigh on the shape of its balance sheet, especially since the company has not generated a net profit in the last five years.

Besides, Plug Power has founded its growth prospects through the issuance of new shares, which climbed by 46.95% since 2018 to 576.4 billion last year. In this context, the company might continue to dilute actual investors, if additional capital is needed to fuel its growth. That is a bearish sign for current shareholders.

PLUG Stock Is Fairly Valued, But Could Fall Further

PLUG is a growth stock and the macroeconomic backdrop is not the most favorable for unprofitable businesses.

After achieving a historic high of $74.49 per share in January 2021, PLUG stock dipped more than 70%. Despite that, the valuation metrics of the hydrogen company are fairly valued compared to peers. The hydrogen specialist is currently trading at an expected 2022 P/B ratio of 2.88x and EV/Revenue of 11.7x.

Fuelcell Energy (NASDAQ:FCEL), a U.S.-based company in the hydrogen universe, exchanges much higher than PLUG in terms of 2022 estimated price-book, with a ratio of 3.34x, but trades slightly below PLUG in terms of EV/Revenue at 11.2x.

Ballard Power Systems (NASDAQ:BLDP), a Canadian firm engaged in manufacturing fuel cell products is currently valued at a 2022 estimated P/B of 2.14x and EV/Revenue of 13.1x.

In spite of that, the stock of PLUG has been the most resilient of our peer comparison in the past year. 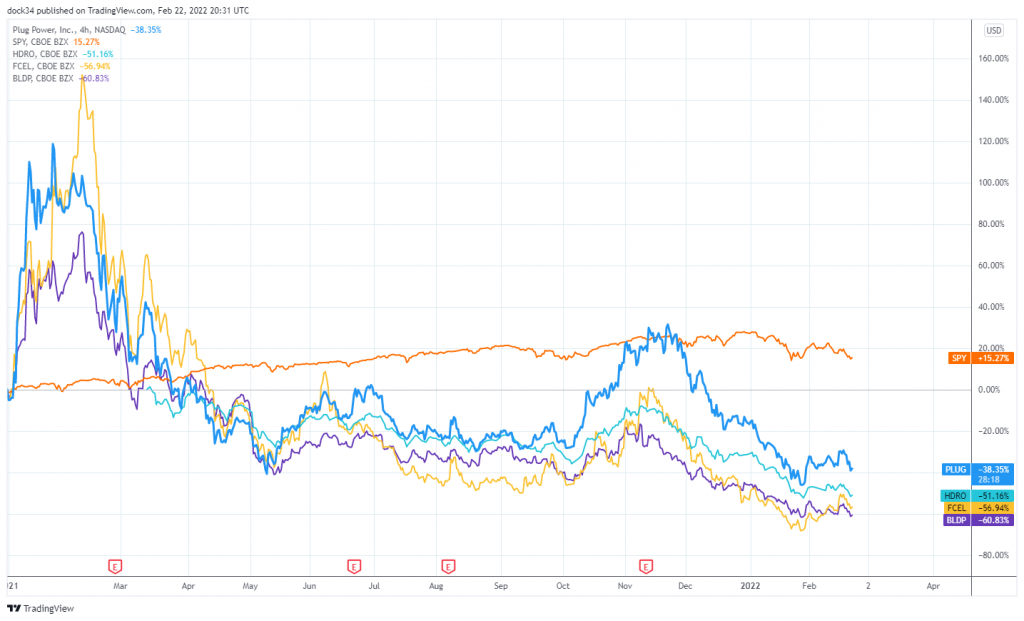 In the meantime, insider trades have been extremely short in the past two years. Insiders have sold $162 million in the past year. More worryingly, there have not been any buy transactions reported on this period, indicating that insiders do not see a material opportunity on the stock for the moment.

With that being said, PLUG stock has interesting long-term projects and is aggressively expanding its global footprint to become a major global hydrogen player in the years to come. Yet, I believe that the downward pressure is not over and I prefer to adopt a wait-and-see strategy until the company starts improving its cost structure and delivering on its investments.

On the date of publication, Cristian Docan held a LONG position in PLUG. The opinions expressed in this article are those of the writer, subject to the InvestorPlace.com Publishing Guidelines.

Cristian Docan, a contributor for InvestorPlace.com, has been writing stock market-related articles for Seeking Alpha, Stocknews, and Wealthpop since 2017. He takes a fundamental and technical approach in evaluating stocks for readers, focusing on momentum investing and macro-driven strategies.

The post Plug Power's Bearish Momentum Isn't Over Yet appeared first on InvestorPlace.