Why Companies Are Hiring Artists for Their Meetings

Creative agencies like Scriberia and Innovation Arts are offering 'scribing' services to companies who want an illustrated record of their meetings and events.

In this era of PowerPoint presentations and videoconferencing, a growing number of companies are making what is perhaps a surprising move by hiring traditional illustrators to bring meetings to life.

These artists, known as "scribers," provide live illustrations to give a visual interpretation of meetings and corporate events in an effort to engage the attendees and help set the company apart from their rivals.

"It's a growing market," said David Christie, founder of strategy consultancy and design agency Innovation Arts, which has scribed at events including the World Economic Forum in Davos and TED conferences.

Companies hire scribers to make sense of the "increasing complexity" in business environments, Christie said. "Essentially, it's used as a decision-making tool, either through capturing conversations live as they take place, or in an off-site setting where we can analyze information and data to make it more accessible."

Dan Porter, co-founder and creative director at Scriberia, which has worked with companies including Nokia, IBM, Deloitte and Vodafone among others, said there were two main benefits to scribing events. 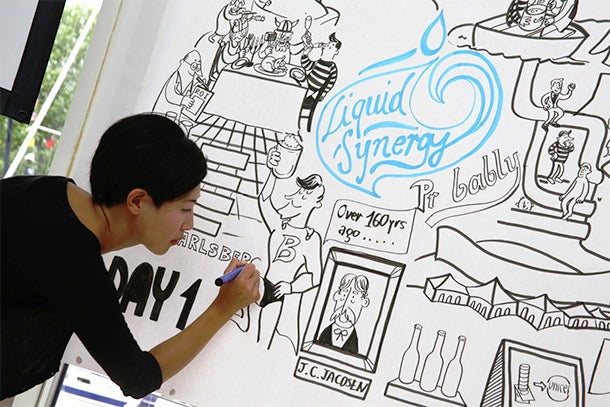 The first is the end-product – which looks very different to standard meeting minutes (an example by Scriberia is pictured above).

"We provide companies with a visual summary which contains the key messages and ideas of the conversation, and then they have an illustrated document which they can share with the rest of the organization," Porter said.

People are much more likely to engage with this, Porter said, because people have more of an emotional connection with pictures than with words. "When you want to get a bit of traction behind an idea, then that emotional side is really important."

And second, a scriber has the potential to bring a boring meeting to life. Porter admitted that sometimes he feels his company is brought in because otherwise, the event would be incredible dull.

"Plus in smaller meetings, you can have a proper facilitation power. If a conversation isn't going anywhere you can stop drawing: if they're not giving you any material to work with they need to pull their finger out," he added.

Neither Innovation Arts nor Scriberia would disclose the amount they charge for scribing services, as jobs are priced on a case-by-case basis.

Andre Spicer, Professor of Organizational Behaviour at London's Cass Business School, said he could see why scribing appealed to businesses – especially as an alternative to more traditional methods used in meetings.

"We have to remember that PowerPoint was once a novel and exciting technique," he said. "Now a big deck is an invitation to mentally switch off at a meeting. By changing techniques, it is possible to keep increasingly cynical and bored audiences engaged."

But he stressed that these new techniques should be secondary to the actual business issues. "Indeed, much of the corporate sector could be accused of being more interested in what presentations look like rather than their actual content."

Innovation Arts' Christie said the benefits of scribing went beyond visual note-taking, and had the potential to help organizations find the answers to tough business problems.

"You don't need agencies to come in and tell you the answer – all you need to do is tap into both their intellect and imagination and make it work," he said, and scribing can do this. "Then, the whole organization can buy into their own solution and they're not being told what to do."

But is it a fad, or does the concept have staying power? It could be here to stay, said Spicer, who pointed out that drawing has been used to communicate for thousands of years.

"In contrast, PowerPoint is only a few decades old," he said, but added: "What would be a pity if these techniques become standardized and stale – creating the same kind of mental prisons which PowerPoint has created in organizations."

Scriberia's Porter conceded that although he believed the future of documenting meetings would be pictorial – it wasn't time to throw out the minutes just yet. "The next generation of meeting minutes is almost inequitably going to be more visual -- people are a lot more visually literate than they used to be," he said.

"But if people feel that it's very important for every detail of that meeting to be recorded for posterity, then I'd recommend that perhaps they have a traditional minute-taker in the meeting as well."

Katrina Bishop is a deputy news editor at CNBC.com. Previously, she worked as a business producer at Sky News and a copy editor at Dow Jones Newswires.