Why have stocks jumped from the October lows and more investors have become bullish? But why have many bears refused to throw in the towel? What is it that they...

By Steve Reitmeister
November 2, 2022
This story originally appeared on StockNews

Why have stocks jumped from the October lows and more investors have become bullish? But why have many bears refused to throw in the towel? What is it that they see points to lower lows for the S&P 500 (SPY) in the months ahead? Let's review the updated bull vs. bear debate including how best to trade this tricky market environment.

This contradiction creates a very confusing gumbo for investors to digest. And likely explains why we continue to teeter on the edge of bear market territory at 3,855.

Let's talk about these competing themes and how it has created 2 different scenarios for the stock market outlook. One bullish and one bearish.

I share which scenario is most likely and what it means for our trading plan in this week's Reitmeister Total Return commentary.

Let's start with the Fed's game plan as clearly spelled out in Chairman Powell's Jackson Hole speech in August:

Now let's remember that this speech quickly sobered up investors who were enjoying a 18% summer rally up to 4,300 for the S&P 500 (SPY). A month later we were making new lows below 3,600.

The Fed cherishes clarity and consistency in their communication. And thus, I say that any investor who thinks there will be a meaningful change in policy announced Wednesday, only a couple months after the Jackson Hole speech, is smoking something that is still quite illegal.

Yet bulls do have some things to cheer such as clear signs of moderating inflation. Almost every key commodity is well off their highs this year. The Bloomberg Commodity Index shows the price trend improving. 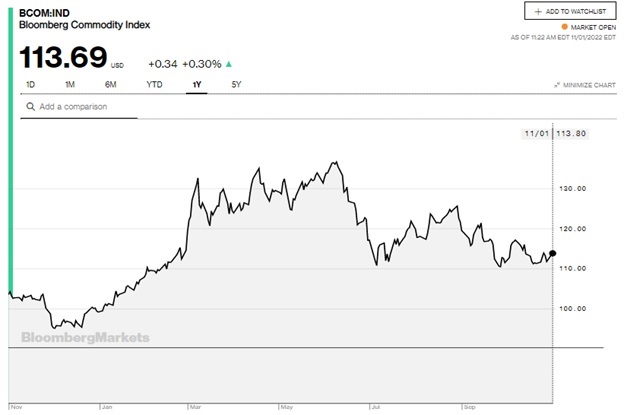 This moderation of inflationary pressures is what is behind the hope the Fed will not raise rates as aggressively in the future...and thus would create less damage to the overall economy. This has some folks calling bottom leading to the strong October rally (and hopes for beginning of new bull market).

On the other hand, commodity prices are just one part of the inflationary picture. Don't forget the "stickier" elements such as house prices and rents. Even more important is wage inflation. That got a JOLT in the wrong direction Tuesday morning (pun intended ;-)

See below the trend of job openings tracked in the monthly JOLTs report. For the previous 5 months it was trending lower which meant fewer job openings...which pointed to hopefully less wage inflation in the future. That is why the jump in that report Tuesday morning was greeted with an immediate stock sell off as it reignited inflationary fears.

Simultaneously to the JOLTs report was the release of ISM Manufacturing. As expected, that continues to move closer to recessionary levels with a reading of 50.2 with forward looking New Orders component a notch lower at 49.2. (Under 50 = contraction)

Here are some of the key statements recorded by ISM to go along with the Manufacturing report to provide color commentary on what is happening now and what it means for the future (bold put in by me for emphasis):

Net-net these statements reiterate the main point of my commentary today. That being clear signs the economy is slowing. But so too inflationary pressures are easing.

Now let me add one more element to consider before I get to my final conclusions. See the negative trend for the S&P 500 (SPY) earnings outlook as we are now more than half way through Q3 earnings season.

This data shows an across the board reduction in earnings estimates for coming quarters. In particular, you will see that Q1 and Q2 of 2023 are now expected to end with negative growth. This corresponds with a growing number of economists pointing to a recession forming in the first half of 2023.

These statistics were put together by Nick Raich who went on to say that Wall Street is being far too optimistic about the outlook. Meaning that the full measure of estimates cuts are not yet showing up and thus is recommending to clients that they expect more stock price downside until we see more of the typical 15-20% earnings loss that corresponds with recessions.

Now we get down to the tricky part. That being to determine which is the more likely scenario going forward.

Scenario 1: Inflation moderates sooner than expected leading to less total Fed intervention and creation of soft landing for economy. In this case, it is not unreasonable to say that we have reached market bottom and new bull market emerging.

Scenario 2: We have already opened up Pandoras box with the economy. Once the wheels are in motion to move towards recession, then the economy can go through a vicious cycle that grinds lower and lower. In this case the bear market is still in play with likely bottom closer to 3,000.

Which scenario is right?

I believe Scenario 2 is much more likely and why I remain bearish. However, Scenario 1 is a possible outcome that needs to be monitored closely.

Until investors are convinced which scenario is correct, then expect increased volatility as we have seen this past week. Heck, Tuesday alone was a prime example.

That being where the market opens up +1% and then immediately gives it all back and then some after the JOLTs and ISM Manufacturing reports. Then it stuck like glue around 3,855 which is an interesting support/resistance level.

Remember that 3,855 is the bear market dividing line representing a 20% drop from the all time highs of 4,818. That is as good of spot as any to have a tug of war over the future of the stock market.

Given history, the odds of soft landing are very low. Famed investor Mohamed El-Erian talks about the same thing in this new article: Chances of Soft Landing are "Meager".

Like El-Erian, my outlook skews bearish. That is why my portfolio is constructed to profit as stock prices head lower.

However, I am sleeping with one eye open for the possibility that the soft landing scenario does emerge victorious where I would gladly switch to a more bullish stance.

Unfortunately, with the jobs market still too hot, then that inflationary pressure alone will keep the Fed on a rate hike war path which doesn't end favorably for the economy and stock prices.

Discover my special portfolio with 9 simple trades to help you generate gains as the market descends further into bear market territory.

This plan has been working wonders since it went into place mid August generating a robust gain for investors as the S&P 500 (SPY) tanked.

And now is great time to load back up as we make even lower lows in the weeks and months ahead.

If you have been successful navigating the investment waters in 2022, then please feel free to ignore.

However, if the bearish argument shared above does make you curious as to what happens next...then do consider getting my updated "Bear Market Game Plan" that includes specifics on the 9 unique positions in my timely and profitable portfolio.

Steve is better known to the StockNews audience as "Reity". Not only is he the CEO of the firm, but he also shares his 40 years of investment experience in the Reitmeister Total Return portfolio. Learn more about Reity's background, along with links to his most recent articles and stock picks.