A Bright Future for an LED Franchise

By Jason Daley
August 23, 2010
This story appears in the September 2010 issue of Entrepreneur. Subscribe » 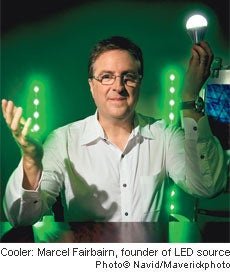 Marcel Fairbairn's fortunes turned on the color blue. Until 1998, LEDs--light-emitting diodes, the small semiconductors that create light using very little energy--came in only red and green. Then Fairbairn, an architectural and entertainment lighting manager, saw blue LEDs at a trade show, and he knew the possibilities had just become infinite.

"You can blend red, blue and green to create almost any color, including white light," he says. "I saw those lights and thought, 'The world has forever changed.'" Fairbairn began using LEDs in his productions and discovered that they are also cooler and easier to work with than incandescent or halogen bulbs and last up to 100,000 hours. By 2007, the light quality was as good (or better) than incandescents, too, and Fairbairn knew it was time to act.

So he shifted from illuminating rock 'n' roll stages to selling LEDs to the commercial world. His Wellington, Fla.-based LED Source franchise--which is finalizing deals in Chicago and eastern Canada and is developing in states including New York, California and Texas--is retrofitting stores, warehouses and business complexes, bringing the light of the future to the masses.

Why franchise?
Initially, I thought I'd build a good online presence with central warehouse distribution. But I have a house in Canmore, Alberta, and when I was flying there for Christmas 2008, I met a gentleman high up in Frito-Lay. That moment changed everything. He followed LED companies and said the future is absolutely LED. The only problem was, for over a year he'd been trying to buy LED products locally but couldn't find them in Texas. He said, "Find a way to have a location in every major city, educate consumers and help them figure out the costs and payback." I knew he was right. So I started drawing out different business models.

Why commercial clients?
A couple of years ago, screw-in LEDs didn't exist. One year ago, the bulbs were $80 apiece. Now Toshiba has come out with a $40 bulb. But even at that price it would take a homeowner seven to eight years to reach payback through energy savings. That's a hard sell. A commercial warehouse that runs its lights 12 to 15 hours a day sees a payback a lot quicker.

Are hardware stores competition?
Home Depot will never carry most of the products we sell. And businesses don't buy their lights there either.

What if technology leapfrogs LEDs?
Some people are pulling out old technologies like cold cathodes, but they don't have the same benefits. ... Still, we wonder the same thing: Is someone going to pop in with a miracle new technology? We just don't see it. There are new patents every day in LEDs--the entire industry is driven by little labs producing better bulbs at better prices. It's full of entrepreneurial companies, and I don't see that changing.

What's your biggest project so far?
We lit the Super Bowl! We used approximately 10,000 watts of LEDs to replace the 100,000 they were going to use to light the outside. It was very efficient, and there were no failures.