8 of the Greatest Commencement Quotes From Business Leaders

Who couldn't use a shot of inspiration and wisdom at graduation -- or all the time? These eight business leaders brought some serious game to their commencement speeches.

Commencement speeches aren't typically renowned for their riveting content or brevity, but, once in a while, hopeful graduates get a speaker who is not only entertaining but also drops wisdom like a grenade and brings hungover graduates out of their seats.

These eight charismatic business leaders did just that when they gave their commencement addresses, making the grade for this unofficial list of the best quotes.

“Your time is limited, so don't waste it living someone else's life. Don't be trapped by dogma. ... Don't let the noise of others' opinions drown out your own inner voice. And, most important, have the courage to follow your heart and intuition. They somehow already know what you truly want to become.”
-- Steve Jobs, Stanford University, 2005

Late Apple CEO Steve Jobs gave one of the most memorable commencement addresses at Stanford University’s graduation in 2005, a year after he’d been diagnosed with pancreatic cancer. Jobs spoke frankly of his being adopted, being fired from Apple in 1985, and death -- which he said was a “gift” in its ability to make time count.

Be too legit to quit.

Steve Ballmer is well-known for his over-the-top enthusiasm during speeches. At the 2014 graduation at University of Washington, the L.A. Clippers owner and former longtime Microsoft CEO told the graduates that he, at 58-years-old, had no clear plan of what he was going to do next -- but that success was a long-term trip, not an overnighter.

It isn’t the first time Ballmer has urged a crowd to “be hard core,” with an overabundance of energy.

Find someone to love.

“It took me a long time to be as brave in my personal life as I was in my professional life … to be brave in love means opening yourself up to the possibility of heartbreak.”
-- Mellody Hobson, University of Southern California, 2015

At the University of Southern California this year, Mellody Hobson, president of Ariel Investments and chairwoman on several boards, not only spurred students to find someone to be passionate about -- but also to expand their bandwidth of diversity by getting to know people with whom they have seemingly nothing in common.

On the other side of failure is clarity.

"There are few things more liberating in life than having your worst fear realized. … It’s not easy, but your perceived failure can become a catalyst for profound reinvention. … Whether you fear it or not, disappointment will come. The beauty is that through disappointment you can gain clarity, and with clarity comes conviction and true originality."
-- Conan O’Brien, Dartmouth University, 2011

The comedian and TV personality Conan O’Brien spoke about his very public failure in 2010 when he was given NBC’s Tonight Show hosting gig (that once belonged to Jay Leno) only to be forced out of the role. He spent the following year “adrift,” he admitted, trying on new career moves such as doing stand up and touring on the road. The time, he said, yielded the most rewarding year of his career.

Related: 38 of the Most Inspirational Leadership Quotes

“[Careers are] not a ladder; they’re a jungle gym … look for opportunities, look for growth, look for impact, look for mission. Move sideways, move down, move on, move off. Build your skills, not your résumé. Evaluate what you can do, not the title they’re going to give you. Do real work...and don’t expect a direct climb.”
-- Sheryl Sandberg, Harvard Business School, 2012

In her speech to graduates, Facebook COO Sheryl Sandberg spoke about her travails finding a job after graduating Harvard Business School and moving to Silicon Valley in 2001. At the time, Sandberg had been offered a job at Google, which she expressed to its CEO-at-the-time, Eric Schmidt, didn’t meet her job requirements. His response to her: “When companies are growing quickly,” said Schmidt, “careers take care of themselves.”

“Stop thinking about your dream, act on it. There are 30,000 days in your life. … There are no warm-ups, no practice rounds, no reset buttons. Your biggest risk isn't failing, it's getting too comfortable. ... Instead of trying to make your life perfect, give yourself the freedom to make it an adventure, and go ever upward.”
-- Drew Houston, Massachusetts Institute of Technology, 2013

Dropbox CEO Drew Houston returned to his alma mater to encourage graduates to become obsessed with something that matters to them -- and get started immediately. In building Dropbox, reportedly valued at $10 billion in 2014, Houston shared that his wins have been as magnificent as his failures.

Punching a time clock is not the way to change the world.

"At the end of the day, you can decide whether you want to be an employee with a great attendance record, getting promoted to ever better titles and working on interesting projects or whether you want to attempt to do something spectacular. This be or do should be a question you never stop asking yourself for the next 20 years and beyond."
-- Steve Blank, University of Minnesota, 2013

Silicon Valley entrepreneur Steve Blank spoke to graduates of his realization that he wanted to do more than just be a “cog” after leaving the military as a youth and joining a big tech company. At the time, his friends working at startups were living in garages and were free to pursue their own ideas and cultivate their talents -- he made his choice and joined them.

Related Link: Steve Blank: 'Entrepreneurship is a Calling, Not a Job.'

Doing what you love creates resilience.

“When you’re doing what you love to do, you become resilient, because that’s the habit you create for yourself. You create a habit of taking chances on yourself and making bold choices in service to doing what you love.”
-- Dick Costolo, University of Michigan, 2013

At the top of his humor-filled address, Twitter CEO Dick Costolo tweeted -- naturally -- then went on to warn graduates about there being no script for how careers unfold. He used himself as an example: As a graduate of University of Michigan, Costolo moved to Chicago to pursue improv comedy -- what many might consider a life of artistic poverty. While he didn’t remain in improv, he integrated valuable lessons that lead him to where he is now. 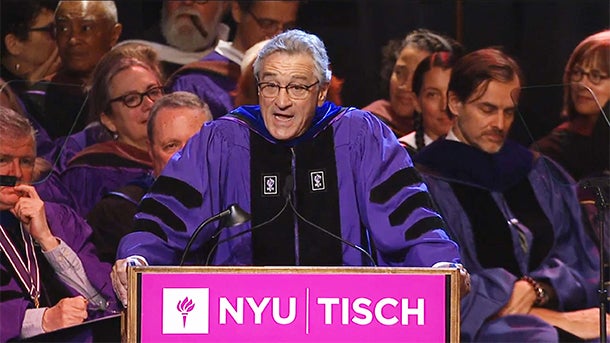