Does College Matter for Entrepreneurs?

Just over half of business owners have a college degree. Here's why more might pursue higher ed in the future. 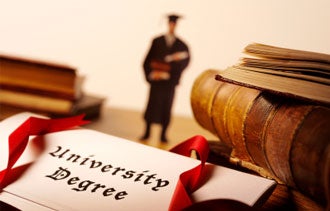 Does college get entrepreneurs ready for success? Or, is starting a business straight away a viable alternative for those who don't want to slog through four years of higher education?

This question came to mind after recently perusing a small-business-focused infographic from the credit-card comparison site CreditDonkey. Among the fun facts about entrepreneurship in the graphic: Just over half of business owners have a college degree, according to recently released survey data from the U.S. Census Bureau.

This stat is particularly interesting because it would seem that entrepreneurs, on a whole, tend to have more education than the general public. Of the American labor force, fewer than half of workers don't have a degree -- 25 percent have only a high school diploma while another 19 percent attended but didn't graduate from college, according to the Census Bureau.

It may be a chicken-and-egg question, but I'm betting that somewhere along the way the egg cracked and yoke got all over the place.

Entrepreneurs tend to be mavericks, and perhaps many rebel against the structured environment of spending four years sitting in classrooms. A new scholarship program for entrepreneurs even encourages promising would-be business owners to quit college to work on their ideas full-time.

Further, business owners are fairly old on average -- nearly 50, a 2009 Network Solutions report found. That means many graduated high school decades back -- in an era where there were more opportunities workers could pursue without a four-year degree.

But the reason why more seem to pursue higher ed may have more to do with the amped-up support structures for entrepreneurs at colleges and universities these days. College-student entrepreneurs today can often take advantage of plentiful campus-based resources, including incubators, mentoring and connections to possible funders. Over time, I'd expect the percentage of owners who graduate to increase, as younger entrepreneurs may be more drawn to use campus resources to launch their ventures.

Also, as business relies increasingly on technology, advanced degrees may give an entrepreneur an edge.
One final interesting tidbit: roughly half of all small businesses are home-based. That's a lot of dens and kitchen tables being used for business activity. Surely there's a few entrepreneurial opportunities in that fact.

Do you think a college degree is important for entrepreneurs? Leave a comment and let us know.