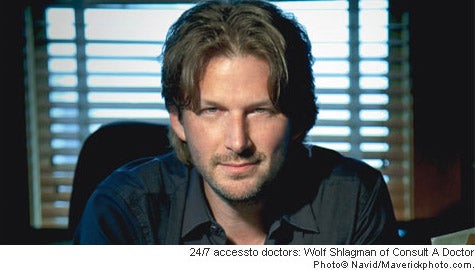 While the effects of healthcare reform induce ulcers for many people involved in related businesses, entrepreneur Wolf Shlagman is taking it in stride.

"What I'm hearing across party lines in Washington is, 'How do we use health information technology innovation to provide access and coverage to more people?'?" he says. "It's pretty much the description of what we do."

Shlagman is co-founder of Consult A Doctor, a Miami-based telemedicine company that offers benefit providers' clients round-the-clock remote access to physicians. He believes that regardless of the changes made to the healthcare sys-tem, the cost savings his company offers will still be in demand.

Venture capital firm Morgenthau Venture Partners thought the idea was fit enough to lead a $5 million Series A round of financing that closed in February. Other investors in the round included New World Angels and Promociones Bursa, an international consortium of investors in healthcare and technology.

Shlagman's "aha" moment for the concept came in 2002, when he was working for a startup Internet company and connected the dots between access to medicine and telemedicine. Later that year, he conceptualized the business model. After three or four years of research development, he connected with co-founder Elan Shanker, whom Shlagman had worked with at a tech startup, for a 2007 launch.

That's also the year the National Center for Policy Analysis reported that nearly 55 percent of emergency room visits were not emergencies. The center found that people were using emergency rooms for primary care access because physicians weren't available by phone or e-mail outside of the office. Shlagman says these core problems are exactly the type of issues that his company solves.

Consult A Doctor works with health plans, self-insured groups, third-party administrators, brokers and other benefit providers to offer 24/7 access to doctors via phone and secure e-mail. It has recruited its own national network of doctors who provide care advice and even some prescriptions, depending on the program.

After Consult A Doctor found it could no longer bootstrap its way to success, the partners attended the 2009 Florida Venture Capital Conference, an annual meet-up of investors and people who want access to their money.

"We sent in our business plan and information, and we were one of about a dozen selected to present," Shlagman says.

That led to an introduction to the team at Morgenthau. Consult A Doctor had several offers of angel and investor funding, Shlagman says, but chose Morgenthau because the roster of partners it brought in had experience in health technology and understood the niche.

Shlagman says his company will use some of the money to target key markets, including managed-care health plans. The rest of the money will be invested in expanding services that will add value and lower costs, including specialist consults, requests for lab services, pharmacy services and telemonitoring to ensure that patients are following their care regimens.

"We see this service reducing unnecessary doctor visits, ER visits and making healthcare more accessible and more convenient," Shlagman says. "That will play a role in wellness as well, which reduces costs in the long run while keeping patients healthier."