A SOPA About-Face for Members of Congress

By Jason Fell
January 20, 2012
Opinions expressed by Entrepreneur contributors are their own. 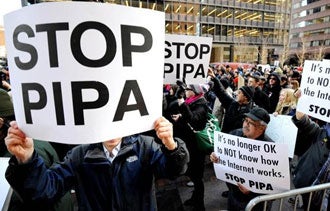 In the wake of several dramatic online and in-person protests, the authors of two anti-piracy bills announced today that any further action has been postponed. First, Senate Majority Leader Harry Reid (D-NV) said he decided to postpone today's vote on the Senate's PROTECT IP Act (PIPA) "in light of recent events." Shortly after, House Judiciary Committee Chairman Rep. Lamar Smith (D-TX) issued his own statement indicating that the committee is postponing consideration of the Stop Online Piracy Act (SOPA) legislation.

The moves follow several online protests this week from companies including Google, Wikipedia and Reddit, as well as in-person demonstrations around the country, including NY Tech Meetup's rally Wednesday in Manhattan.

SOPA and PIPA aimed to punish "rogue" websites that publish or sell pirated content. But online companies such as Facebook and AOL argued that the bills could negatively affect the flow of information online and stifle innovation among internet entrepreneurs.

The postponements represent a major victory for the online tech community. But the issue of piracy is far from dead. Both groups have pledged to continue their efforts to find a solution that has wider approval.