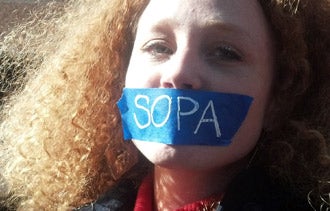 The online tech community continues to voice its opposition in dramatic fashion to a pair of bills that aim to combat online piracy by foreign websites. In New York City, technology entrepreneurs and enthusiasts staged their own demonstration, gathering in front of the offices of Democratic New York senators Charles "Chuck" Schumer and Kirsten Gillibrand.

The event was organized by a group called NY Tech Meetup, which claims to have more than 20,000 members.

"These bills clamp down on entrepreneurship," Meetup founder Scott Heiferman tells Entrepreneur.com. "They give power to government and big media companies to muck with the open Internet. The Internet isn't all about big media. It's about people."

The two bills -- the House's Stop Online Piracy Act (SOPA) and the Senate's PROTECT IP Act (PIPA) -- aim to punish "rogue" websites that publish or sell pirated content. The SOPA bill would allow copyright holders to obtain court orders to disallow other companies from doing business with the sites that are alleged to be in violation of a copyright.

While the bills are supported by groups including Motion Picture Association of America, online companies such as Facebook and AOL have countered that the bills can negatively affect the flow of information online and stifle innovation among internet entrepreneurs.

A number of major websites also demonstrated their opposition to the bills. Among them, search giant Google blacked out its logo online. Wikipedia shut down its site for 24 hours in protest and Reddit followed suit by going dark for 12 hours.

Last weekend, the White House issued a statement officially opposing the bills as the are currently written. It said, however, it will continue to work with Congress on "bipartisan" legislation to fight online piracy.

NY Tech Meetup organizers urged attendees to contact their local legislators and voice their opposition. Moreover, companies including Google are asking visitors to sign an online petition against the SOPA and PIPA bills.

Of the demonstration in New York, Heiferman says organizing it was "a natural." "This is the NY tech community and we do what communities do: Stand up when things need to be stood up for," he says.

Check out our Facebook page for more images from the NY Tech Meetup event.