Today, having a functional, strategic website is the norm -- in 2015, more Americans shopped online than they did in stores, and 3.2 billion people were using the internet -- but it wasn’t always that way.

Since the invention of the World Wide Web in 1991, companies have been forced to design and redesign their websites based around the needs of the ever-changing consumer.

We dug up the home pages of 15 popular companies using the WayBack Machine and used them to show just how much the internet has changed.

Note: Wayback Machine has been capturing significantly more images of these websites since 2012. We used a good number of images of websites from 2013 because there is a large number of screenshots to choose from at that point in time as reference, but we also dug way back in the archives Apple, The White House and NASA.

13 Pivotal Internet Moments That Forever Changed How We Live, Work and Play

Why the Internet Needs the WayBack Machine, the Site That Archives the Web

15 Internet Relics We Miss (and Some We Don't) 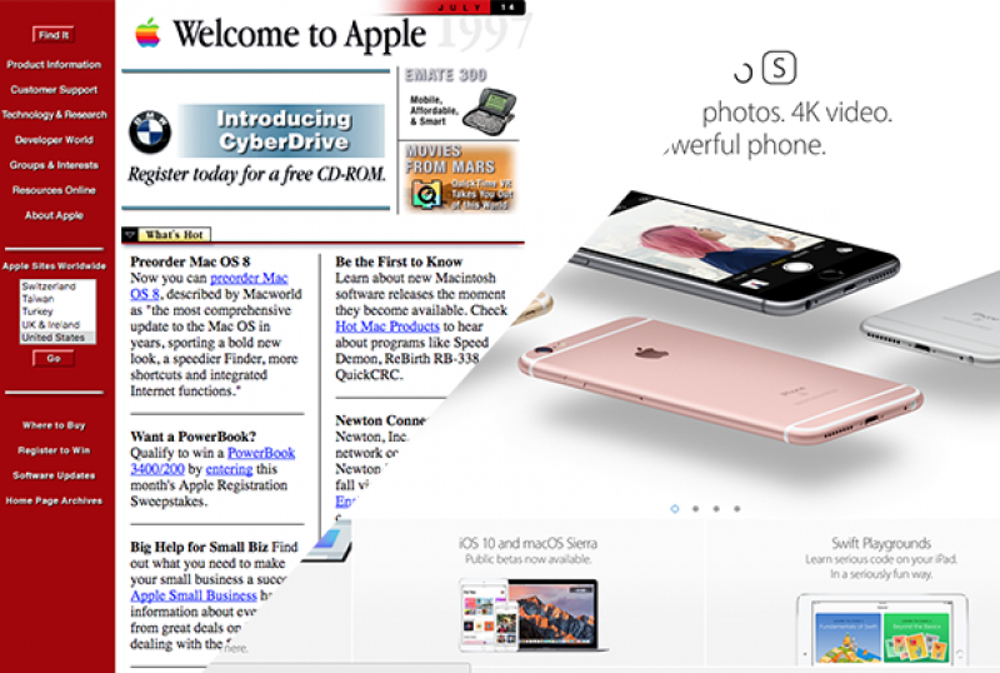 In 1997, Apple’s website featured a “what’s hot” button and a brightly colored sidebar. “It was about the flash, the design, the cheesy colors. People are trying to figure out what websites are,” says Dave McGowan, president and co-owner of Stectech, a website design company that has worked with companies such as Google and GE.

Today, Apple has taken advantage of what McGowan calls “the intuitive scrolling effect.” The best example of this is on Apple’s MacBook section of the website. “As you scroll, you will see that it plays a video or an animation of what their MacBook looks like,” McGowan says. “Really, it’s about that engaging experience.” 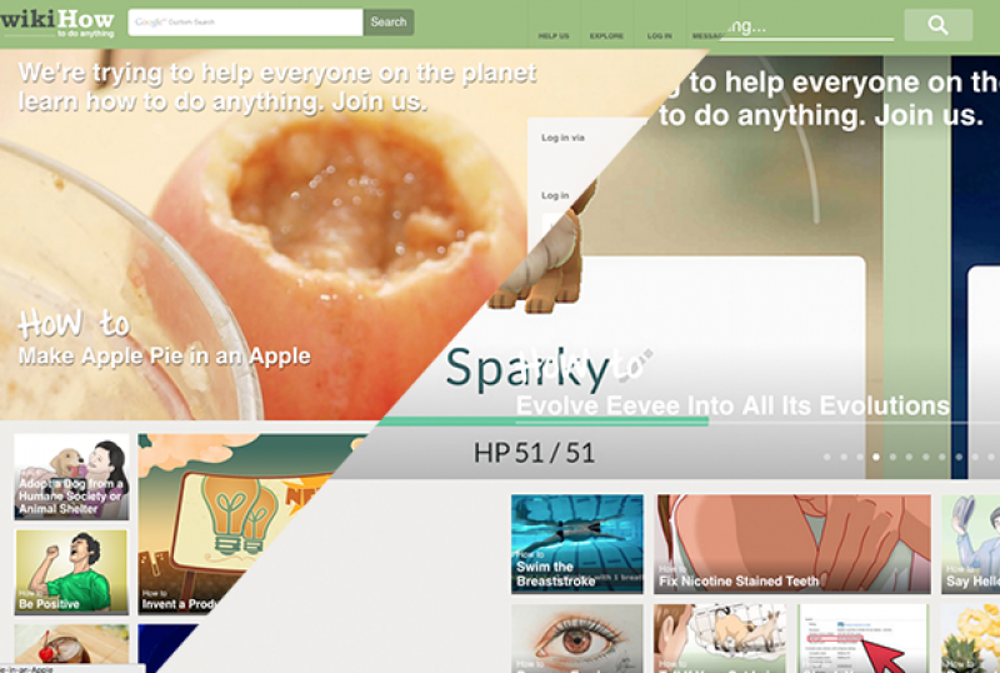 WikiHow’s webpage hasn’t changed much. However, after 2013, WikiHow quickly learned that the search feature needs to be prominent.

“They understand we are about searching. People need answers,” says Jennifer Dopazo, senior interaction designer and strategist at Candelita, a design and interaction company. “It’s a very specific and clear action.” WikiHow has also branded itself within the search feature. “They are using the placement of the logo to have a call to action,” she says. 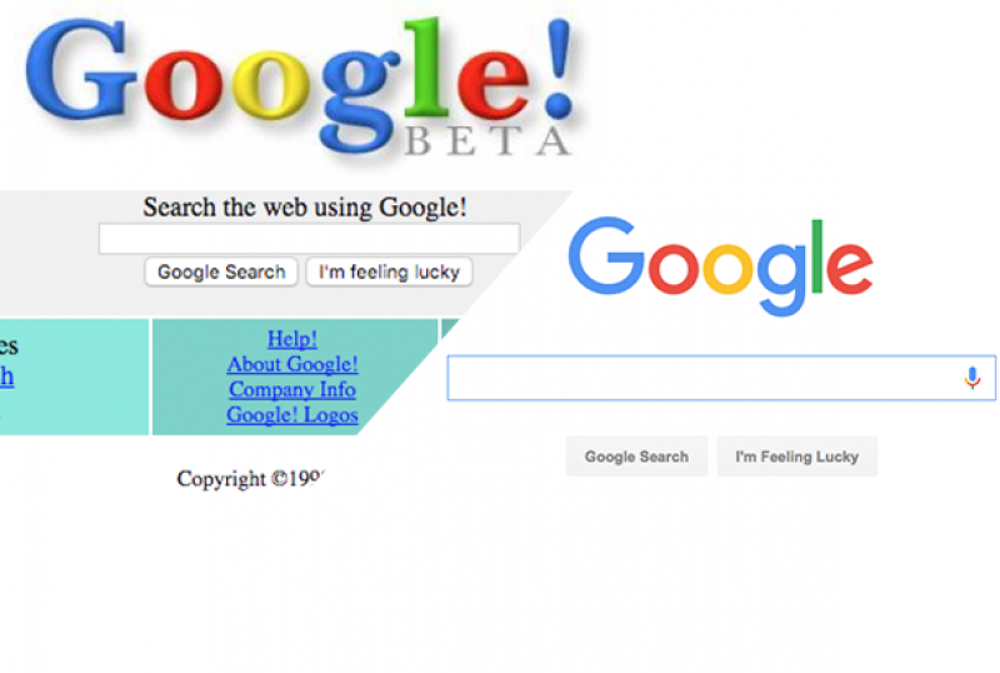 In 1998, Google was using exclamation points (even in its brand) and was loosely designed, but the search giant has worked to make its website highly sophisticated and brand itself across many platforms. “There is a mature feature set in everything Google does,” says David Sieren, director of design at One Design Company, a graphic design company in Chicago. “We want functionality. We want to use it as a tool as quickly and efficiently as possible.” 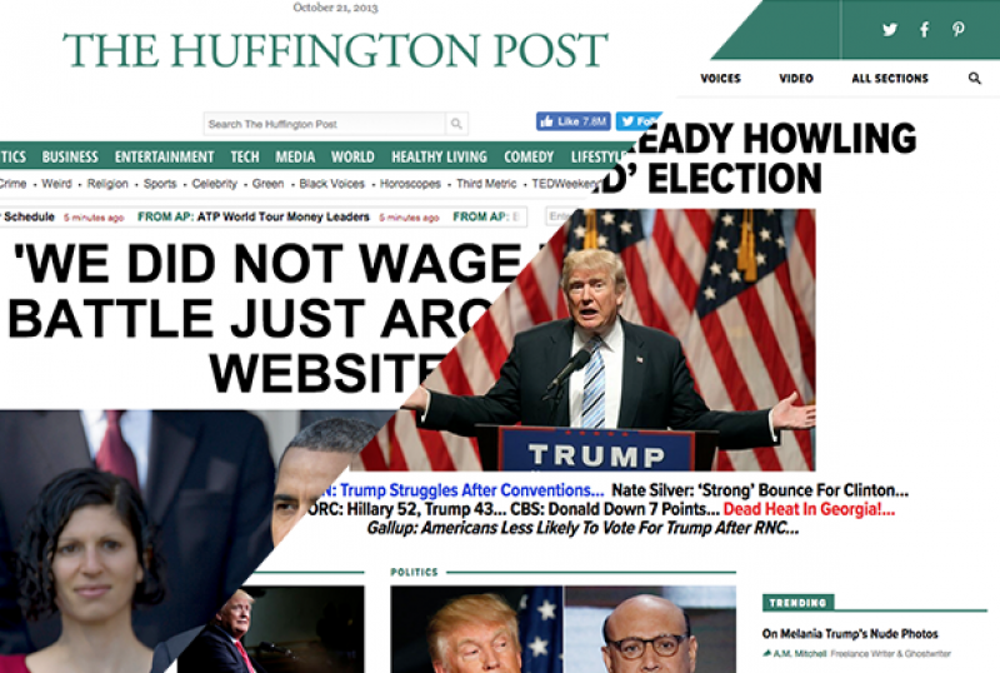 In 2013, The Huffington Post was pushing as much content to viewers as possible by using features such as a scrolling ticker. “They are a news site, so I understand why they put that up there, but that’s on it’s way out,” McGowan says. “People want content that’s easily digestible and sometimes those scrollers aren’t.”

Today, The Huffington Post is trying to direct readers to the most important material. The Huffington Post, along with many other websites, have started using “sticky content,” which remains on the page as you scroll. For example, The Huffington Post’s navigation bar at the top and its video section are “sticky.” By using this strategy, you are driving visitors deeper down in the site and attracting readers to content that creates revenue, McGowan says. 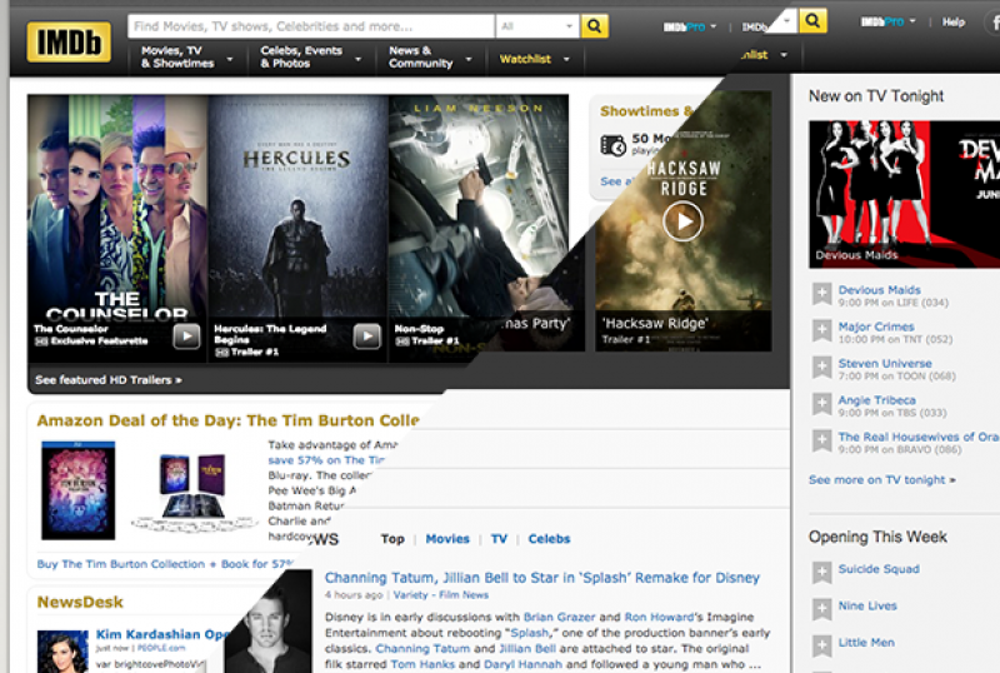 In 2013, IMDb hadn’t tapped into multimedia and the user experience. The website hardly used any video at all, which isn’t ideal for a website that promotes video content.

Today, IMDb has captured the multimedia experience. “IMDb is more cinematic, it’s more immersive, which is the experience that you have when you got to the movies,” Dopazo says.

IMDb has found a way to keep viewers scrolling down by often giving its homepage a theme (as of this writing the latest Jason Borne movie) and it also made the website more immersive, Dopazon says. “Going to the movies is about the senses,” she says. “It’s good to translate that experience without being very obvious.” 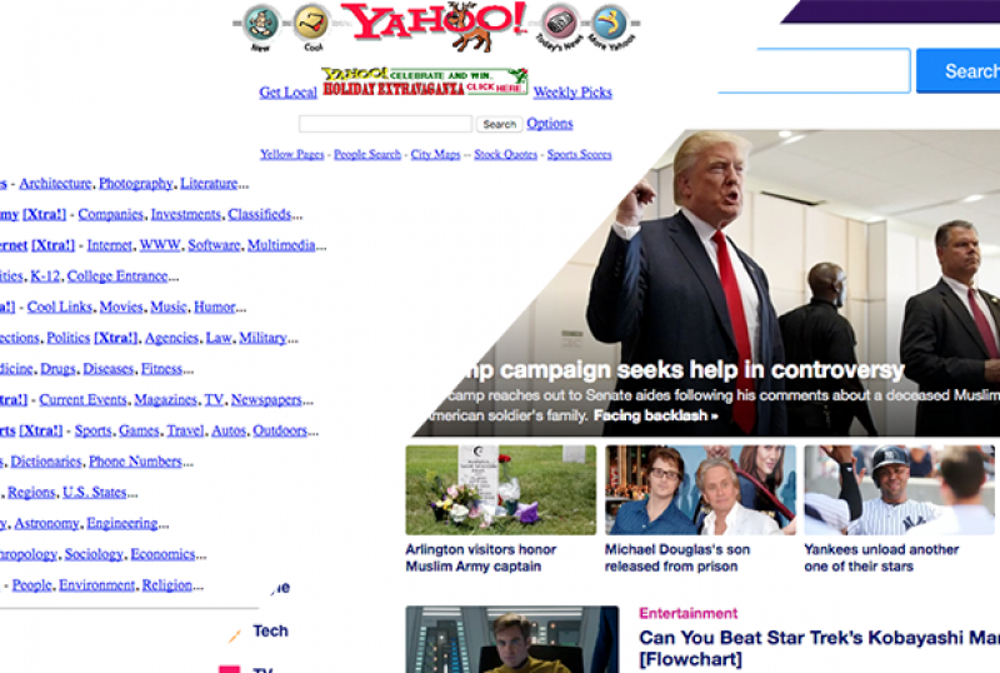 Similar to Google, Yahoo used to employ clipart, icons and an outdated interface on its site. “It’s amazing to look back in 1996 and look back at how unsophisticated the online landscape was,” Sieren says. “It’s a hot mess.”

However, Yahoo took a different approach to its modern website. Instead of trying to compete with Google or other search functions, it is now a publishing platform. “They are curating content based on an algorithmic understanding of who I am and what my search and browsing behaviors are,” Sieren says. “They are not trying to compete with Google with that core search functionality. 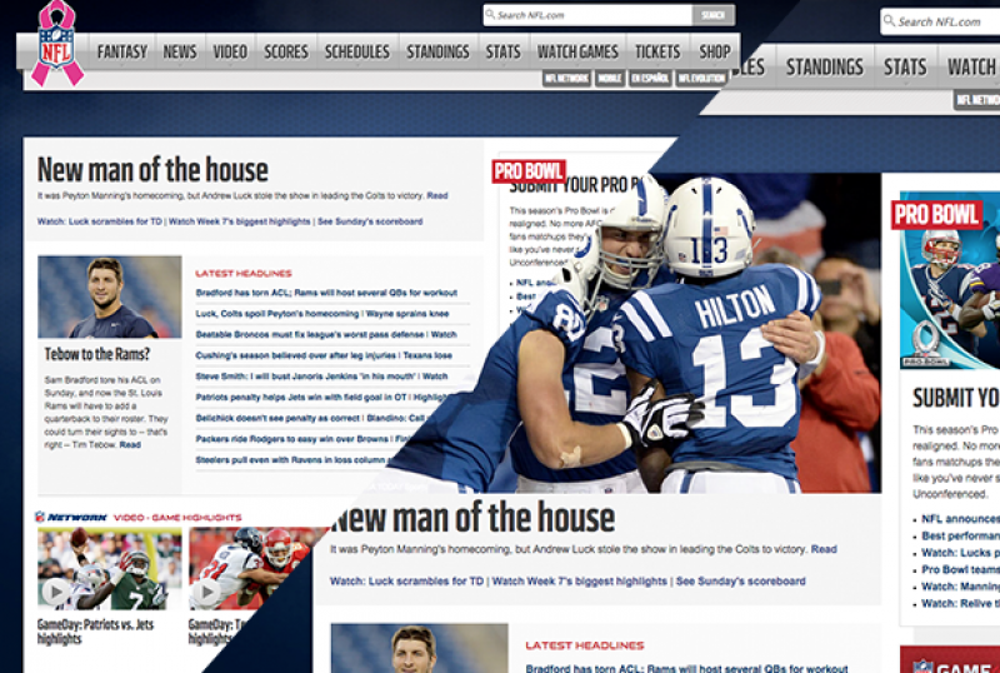 Interestingly enough, the NFL hasn’t changed its website much from 2013 to today -- and it’s not because the design is working. “Two thumbs down for the NFL, unfortunately,” McGowan says.

The 2013 and 2016 websites are incredibly text heavy. “I think they still have the same design as they did three years ago,” McGowan says. “If they cleaned up the bottom and made the content easier to digest, I think they would have better user engagement.” 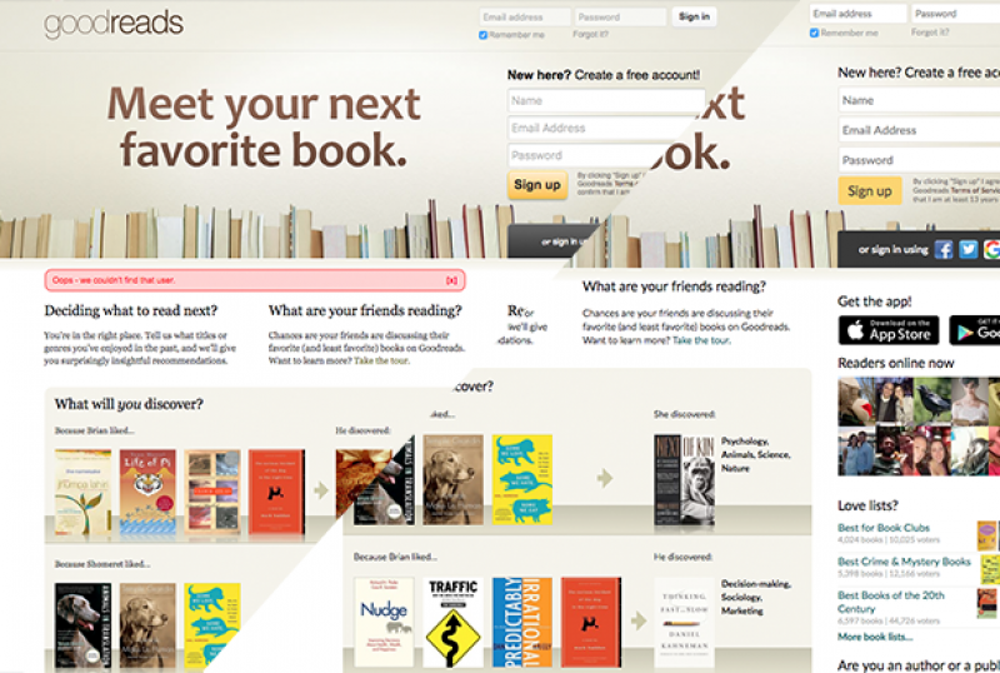 GoodReads is another website that hasn’t changed significantly, which is likely due to the nature of the company and the devices that people access the website from. “I only use it on my devices. I don’t go to it in a browser,” Dopazo says. “Their data has noted that.”

GoodReads is a company that highlights smartphone and tablet usage. “It’s about the experience on the go,” Dopazo says. “They haven’t changed that much. They even have the same header and same structure.” 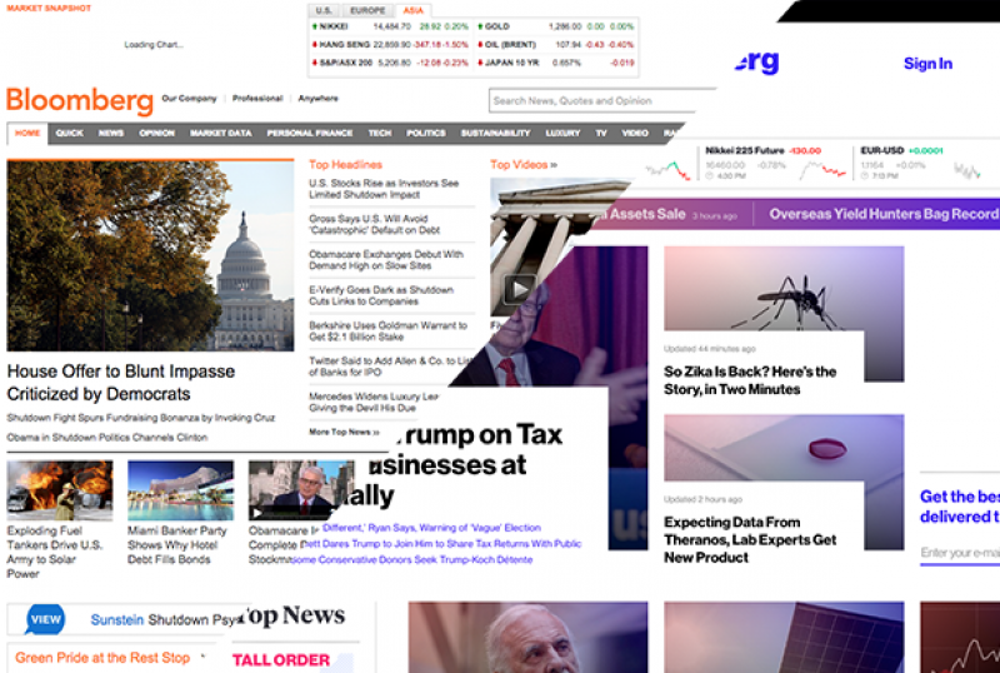 Even from 2013 to today, Bloomberg has drastically changed its website. “The turnaround between three years ago and today is so dramatic in a positive light,” Sieren says.

Bloomberg has taken an incredibly aggressive approach to design, improving the functionality of the website, the user experience and the aesthetics, while also promoting the content that benefits it the most. “Bloomberg is trying to figure out what the next thing is going to be,” Sieren says. “They have been consistently reevaluating themselves at every chance they can. They are bold and progressive.” 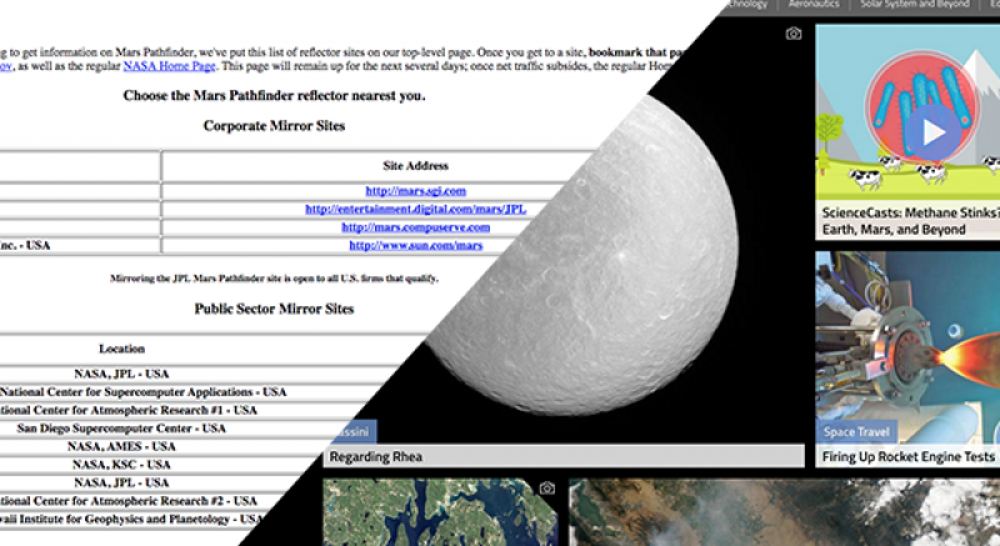 Like the White House, NASA’s website wasn’t entirely sure what it was supposed to be in 1996. It was focused on being a database, instead of branding. “Their logo isn't anywhere. They just put some text and some links for other websites,” McGowan says. “Quite a bit is missing from this.”

Today, the website uses many photos and looks to show off projects. “They realized that branding is important and they put their logo on the site,” McGowan says. 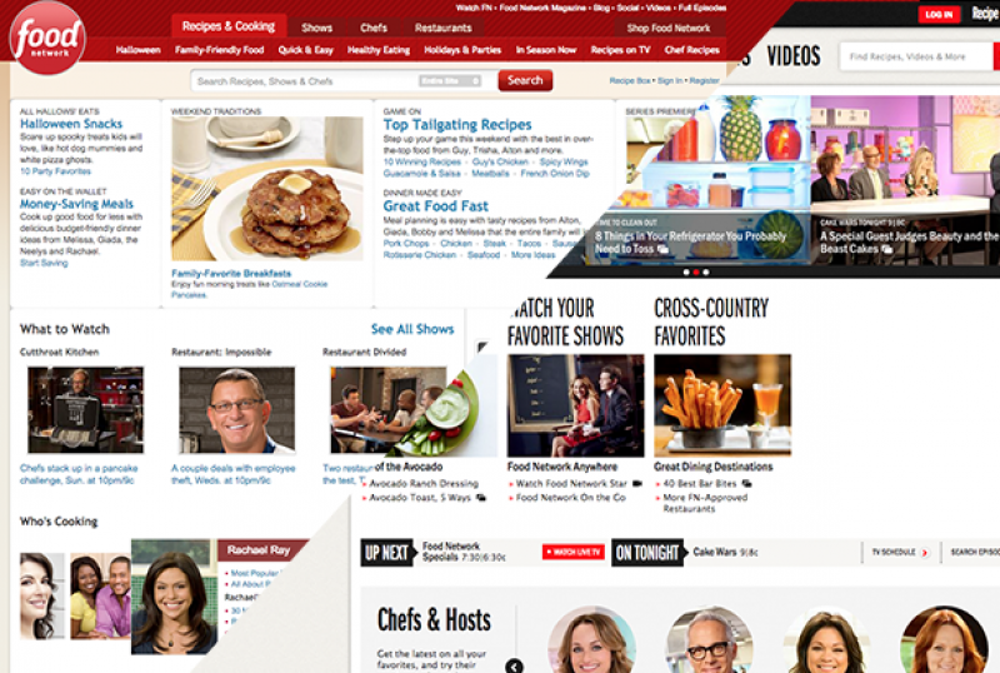 In 2013, Food Network was trying to attract viewers to as many headlines as possible, but today it uses visual content to draw readers in. “They understand how your eye might scan the website,” Dopazo says. “Everything has its own space and order, it feels cleaner.”

One of the most important changes is the need to constantly change its content, or refresh its old content to make it newsworthy. “We always want to check new things,” Dopazo says. “If I come to the website three times a day, I want to read new content. You want to keep users engaged by keeping content fresh.” 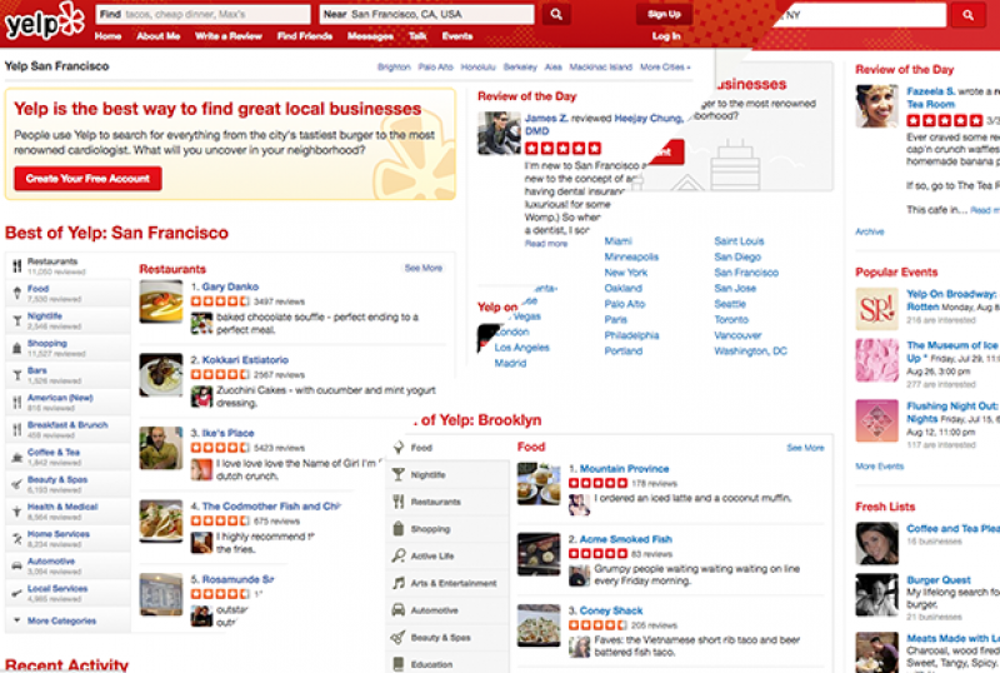 Yelp is another website that hasn’t updated much since 2013. “I don’t think that matters,” Sieren says. “They have an app that’s ubiquitous.”

Even today, Yelp doesn’t have a responsive desktop website. The reason behind this? Sieren believes that it’s because Yelp doesn’t generally have desktop users, as most people who are using it are using the app. “It’s not a website that demands that [responsiveness],” Sieren says. “You are going to pop open the app.” 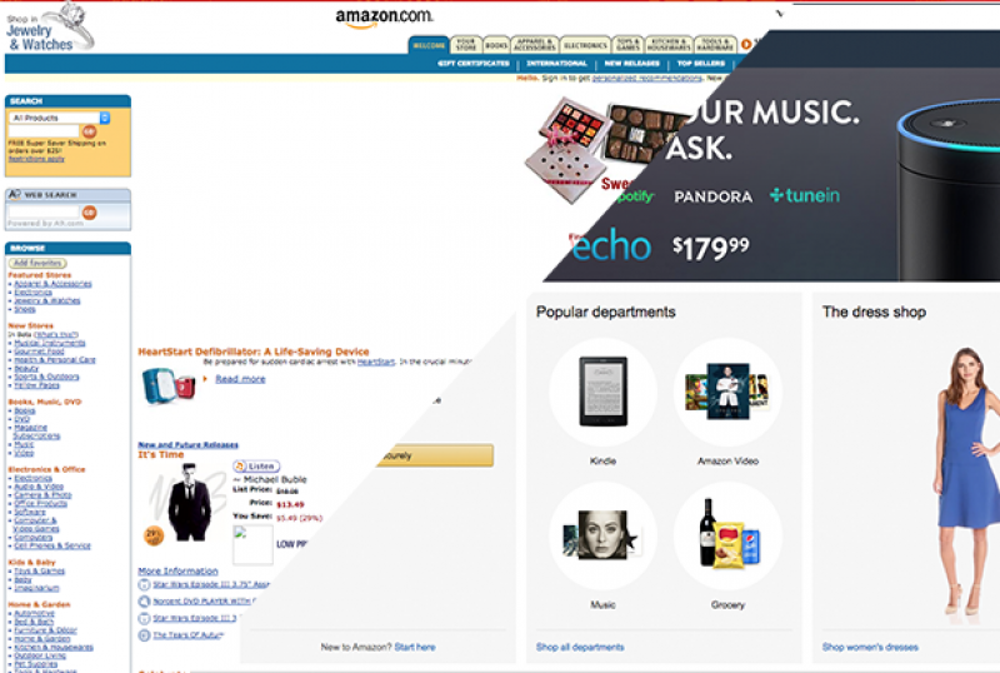 In 2005, Amazon hadn’t quite figured out how powerful images and browser histories are. “Today, they load those prominent images through your browsing history,” McGowan says. “Leveraging that history back in 2005 could have produced a much higher revenue stream for them.”

Amazon has since become the expert in taking browser history and increasing its chances to make money. “Amazon is smart enough to know that they have to put those products that you have recently viewed, that you have a higher chance to purchase, up in front from a conversion standpoint,” McGowan says. 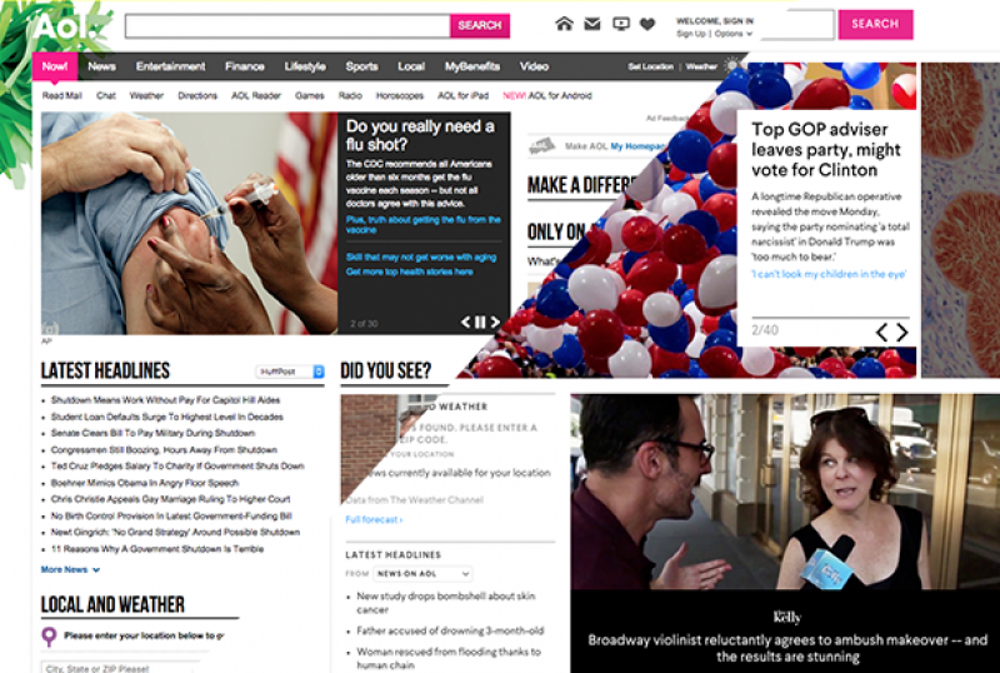 AOL has not only changed its user interface, but has figured out exactly what visitors are looking for and taken advantage of it. AOL has now created categories for viewers and highlights them with a sidebar. “What we have now is the bar on the left, which is the main goals that they are assuming the readers are going to the page for,” Dopazo says.

These goals represent what AOL has become, not only a source for mail but also for information and news. “They understand what people want from the website,” Dopazo says. “In the old one it’s not that obvious.” 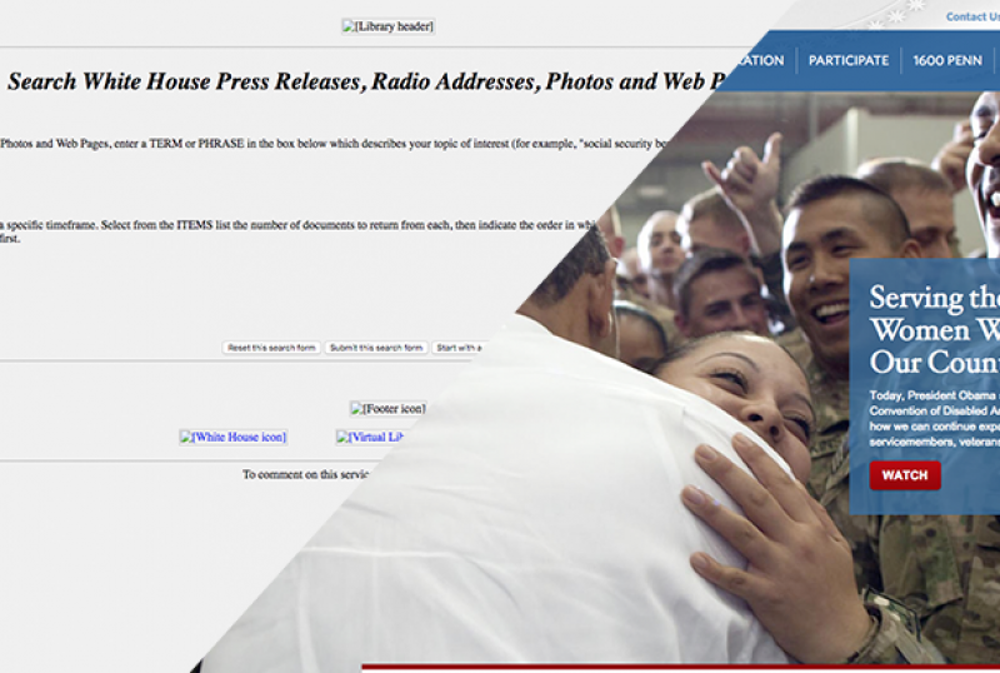 In 1996, government websites had not found their purpose. They were mostly being used as a database search tool. “It was unknown what a website should be,” McGowan says. “They didn’t know what type of content to put on there.”

The modern White House website design is simple and has intuitive navigation, McGowan says, which allows for easy accessibility from a broad audience. More important, the website is a branding tool for both the president and the United States by using images and logos. “It’s image heavy, having that branding experience,” McGowan says. “They don’t have any branding whatsoever on their old one.” The website even has a “photo of the day” section.

Related: 4 Reasons to Be Excited by the 'Internet of Things'
More from Entrepreneur