Olympic Athletes Turn to Crowdfunding for Travel Expenses, Training Gear and a Ticket to Their Dreams in Rio

More than $400,000 has been raised on almost 90 crowdfunding campaigns to help athletes from around the world take the final step to the summer games.

Every two years, we turn Olympic athletes into the ultimate heroes and worship them for their hard work, sacrifice and determination. The glamour shots on television, however, belie the underbelly of the life of an elite athlete. It's grueling -- and expensive.

For many Olympic athletes, paying for training and associated expenses related to participating in international competition, such as travel, is a challenge. Crowdfunding has now become an answer to their financial hardships.

San Diego and Menlo Park, Calif.-based personal crowdfunding platform GoFundMe is catering to Olympians by promoting all of the Olympic athlete crowdfunding pages on a single landing page. Taken together, more than $400,000 has been raised by nearly 90 campaigns from almost 4,000 donors.

Related: Why Letting Go Is Key to This Athlete-Turned-Entrepreneur's Success

For example, 20-year old wrestler Kyle Snyder has made the 2016 Olympic Freestyle Wrestling Team. It's a dream come true for him, but Snyder is seeking to raise money so that his family can travel to Brazil to watch him compete. "My goal is to become one of the greatest wrestlers that ever walked on our planet," Snyder says on the crowdfunding page. "It will mean a lot to me to have my family in attendance at this very special event." As a college student, Snyder can't take money from agents or sports organizations. 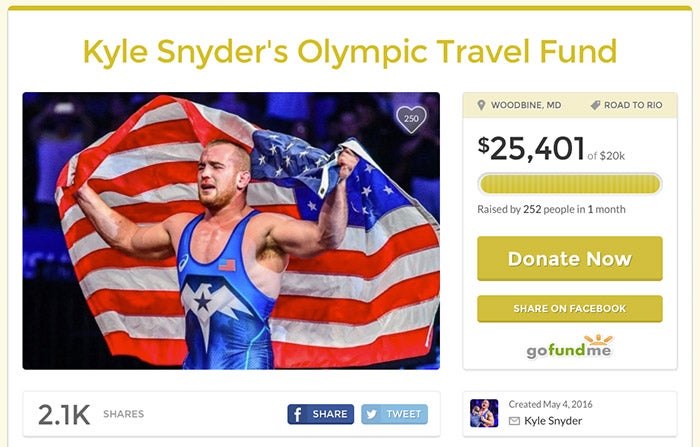 Jeremy Taiwo is a decathlete and trains in five-hour blocks on weekdays. The gear associated with each of the 10 events becomes expensive. "I need to be able to afford to pay for poles, training shoes that don't survive the wear and tear, coaching, strength training and transport to and from meets for competition," Taiwo says on his campaign page. Taiwo set out to raise $15,000 and raised more than $17,000. 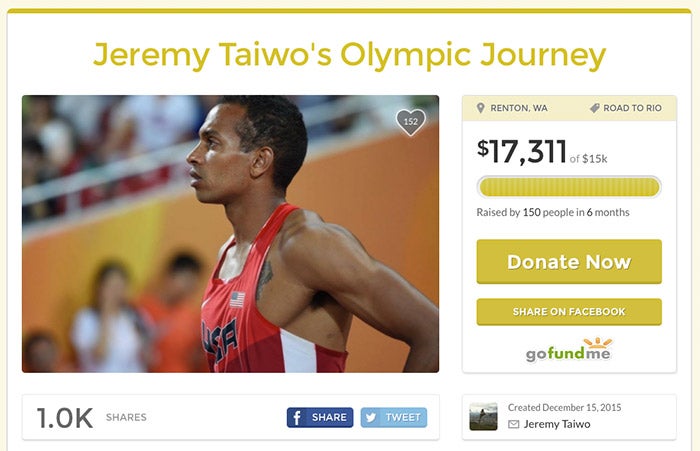 While training is a full-time job for the likes of superstar Olympians such as Michael Phelps, for many athletes, training is a personal passion that lives alongside a traditional job. For example, the Australian handball team receives no outside funding. Last fall, it raised more than $14,000 to get to the Olympic qualifying round in Qatar.

Related: 'I Have Had Way More Failures Than Successes.'

"Players and staff of the national team have to pay for their own expenses, from playing gear and balls to airfares and accommodation when traveling for training camps or international events," the Australian handball team crowdfunding page explains. "Australia is also an entirely amateur team, which means all of our players juggle full-time work or study with training and funding their passion for handball and its development in our region." 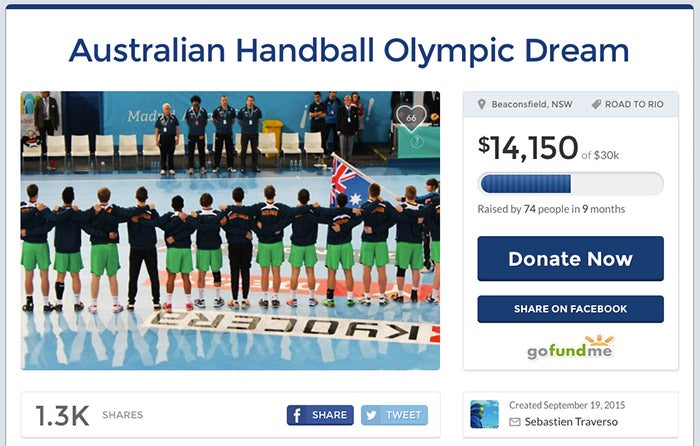 It takes commitment and strength to get to the Olympics, but physical training alone will not get an athlete to the medal stand. For many athletes, crowdfunding is providing an answer to the last-mile hurdles involved in participating in the games.