The Rise of the Virtual Classroom

By Gwen Moran
September 20, 2010
This story appears in the October 2010 issue of Entrepreneur. Subscribe » 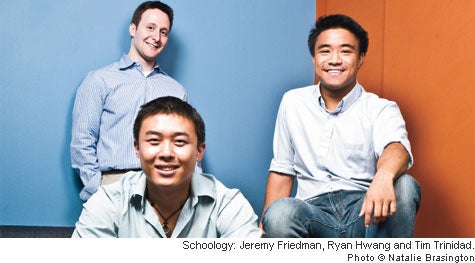 Imagine a world where teachers and professors use platforms like Facebook to communicate with students--not too much of a stretch in this social media age. That's the concept of Schoology.com, an online platform that marries social media and electronic classroom management.

The service provides a full suite of "learning management" tools, including attendance records, tests and quizzes and homework drop boxes, that are designed to use social media to facilitate classroom interaction. It even offers cross-school networking, allowing schools to collaborate in shared classes, groups and discussions. In June, the brains behind Schoology landed $1.25 million in Series A funding.

The platform is the creation of three 23-year-old alumni of Washington University in St. Louis: Jeremy Friedman, Ryan Hwang and Tim Trinidad. They developed an early version of the platform--really just a place to share notes and ideas--in early 2009 when they were still in school. Once it was released commercially that August, demand for more features and functionality grew.

"Students--particularly high school students--wanted to use it more as a collaborative space, and teachers were coming to us to take advantage of that," Friedman says. "We saw an opportunity to create a really interactive and social connection between the two."

They knew they needed cash to grow. The team already was on the radar of Alan Veeck at Sewickley, Penn., venture firm Meakem Becker. Veeck had become aware of the team when it applied to the Pittsburgh accelerator AlphaLab, which works with six startups over the course of six months to help them get established.

Schoology opted to relocate to New York and use an angel investor to get started, but Veeck was impressed and stayed involved.

"Friedman's specific experience in the development realm makes him kind of the MacGyver--he can make anything work and has strong sales skills," Veeck says. "Trinidad is the classically trained software engineer who programs with beauty and elegance and in the way that Google would want to see things programmed. Hwang brings an art in design and product. Their skills complement each other very well."

When it came time for the three to get serious about VC money, they didn't forget who had helped them and turned to Meakem Becker to lead the round. Schoology already has hired four more people to keep up with changes in technology. The service now has more than 2,400 schools nationwide in its system. Friedman says next up is building out interactive content that teachers can use to support course materials, and enhancing parent-focused access.

"Every day we get more and more excited and more and more motivated," Friedman says. "It is a tremendous market and it has been neglected for so long."