As Notorious B.I.G. sang, 'If you don't know, now you know.' Find out what entrepreneurs can learn from the rap game.

Diddy. Warren Buffett. Jay-Z. Bill Gates. You don't normally think of rap artists like Diddy and Jay-Z in the same league as legendary entrepreneurs like Buffett and Gates, but you should.

After all, Shawn "Jay-Z" Carter may be famous for being a rapper, but he also is part owner of the New Jersey Nets, started The 40/40 Club--a restaurant and lounge with locations across the globe--and owns Roc-A-Fella Records and clothing company Rocawear, among other ventures. Curtis Jackson, better known as 50 Cent, is worth a whole lot more than two bits. Some business and rap observers estimate he may be worth close to $1 billion, not because of his music hits, which are substantive, but because in 2004, he invested in Glaceau, the company that produces and distributes Vitaminwater and Smartwater. It was just purchased for $4.1 billion by Coca-Cola, and some have speculated that 50's 10 percent stake in the company will translate to $401 million. Suddenly, it becomes clear: Gates who?

And it's not just big-name rappers capitalizing on the power of branding. Lesser-known hip hop artists are building their own diversified empires, as well. So just what can entrepreneurs learn from the rap game?

Take advantage of opportunities. Checliss Rice, known as Big C, is a success today, but it hasn't always been that way. Big C, 33, is a former rapper based in Memphis, Tennessee and president of Game Time Athletics, which manages rappers, including Frasier Boy, who wrote the Oscar-winning song, "It's Hard Out Here for a Pimp." His company also has a clothing line that includes athletic shoes. He won't divulge his revenues, but he employs seven people and has an office in downtown Memphis, as well as a branch office with a warehouse. In other words, he's doing well.

But that wasn't the case when Big C was in his 20s, working as a manager at Pizza Hut or even later when he was flipping houses, but barely staying afloat. The only reason he was able to start an independent record label was because a friend had some recording equipment--and Big C knew how to rap.

The public, however, wasn't lining up to buy his albums. But when his own music didn't take him anywhere, Big C began working on a couple tours with hip hop and R&B artists, like Bow Wow and Mario. "I was learning everything I could," says Big C, "and I noticed that everyone was making a lot more money off of merchandising than the music." 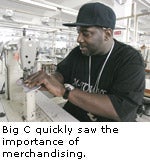 That merchandise included clothing, such as jackets selling for $300. Big C began wondering why he couldn't find a seamstress, buy some fabric and custom-make jerseys. He made a $450 profit from the first two jerseys he sold. "I was off to the races," he says. He began posting fliers at music studios and radio stations, and when a manager for Snoop Dogg ordered four jerseys the next week, Big C knew he was on to something. Within two months, he was making $5,000 to $6,000 a month.

Sell customers an image, not a product. Every chance he got, Big C had celebrities wearing his jerseys, including rapper Lil Jon, who wore one during an appearance on BET, boosting visibility. Big C never took a marketing course; he just had the street smarts that many rap entrepreneurs obtain. "When I was a kid, everyone thought if you had Michael Jordan's shoes, you could play better basketball," he says. "Prior to rap music, I guess people saw cool guys like Tony Bennett, Sammy Davis, Jr., Cab Calloway, drinking and smoking cigarettes, and fans would do that. People always want to associate themselves with the hottest thing."

Diversify. Business owners should consider more than one revenue stream, whether it's making one product for many different uses and demographics, or making many different products for one demographic. Reed Baker, 26, is a hip hop musician with the album ONEinSIX to his credit, but is following the route established by rappers like Diddy--who now has a men's fragrance, TV show, clothing line and record label. 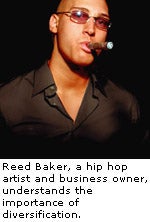 The Desire
But why have rappers latched on so well to the multiple-streams-of-revenue concept and other business strategies? Some of it is pragmatic, says Baker, citing how technology has changed the way the public consumes music, frequently through downloads. "It's hard to sell something that people expect to get for free," he says.

But long before there were music downloads, there was rap culture. "Hip hop culture comes from poverty, and when one is poor, one desires more than most to be rich," says Baker. "When one is immersed in a culture of poverty, one is going to strive to have money." Just ask Big C, whose goal has been to help his mom, who toiled long hours as a nursing assistant when he was a child, retire.

Clyde Smith, a rap business observer and author of the blog, Hip Hop Marketing, says the ability to diversify is more common in hip hop than other music genres. "In general, when you look at rock versus rap music, rappers are much more likely to want to not just put out records, but go into fashion lines and in whatever direction they can expand." One explanation is that the musicians who pioneered rap music had to prove to record executives that a fan base existed--one that not only wanted the music, but the merchandise that goes with it. Smith says at a certain point, the industry could no longer ignore it.

But the success of someone who came from nothing raises the question: What happens when an artist branding himself as a gangsta rapper with plenty of street cred becomes a CEO living in a Manhattan penthouse and traveling in a private jet? "There are a lot of people in rap who criticize the materialism," says Smith. "But for the most part, fans seem to think, 'Great. They're getting what they deserve.'"