These entrepreneurs found creative ways to invest in themselves--and the dividends are piling up.

Elie Ashery had already seen two of his dreams come true. He raised $12 million in venture capital for a dotcom and used the proceeds from its sale to buy his first house.

Later, as a serial entrepreneur stuck at a consulting firm, Ashery wanted nothing more than to start again, this time with his own internet marketing business. But, at least in terms of being able to fund a startup, he was flat broke. In 2002, a door opened--the door to an abandoned storage unit.

"That was really the seed money for what Gold Lasso is today," Ashery says of his Maryland-based marketing firm. "Now I have a million-dollar-plus business that was funded from nothing."

Ashery, 33, was still at his consulting job when he noticed a client, a storage unit company, was holding an auction to sell off the contents of delinquent customers' units. So his business partner, Michael Weisel, decided to check it out, and after seeing sheds filled with everything from old books to pots and pans from a Chinese restaurant, he found a shed more to his liking--one filled with old file servers, licenses and other tech equipment from a defunct dot-com. He bought the contents of the unit for $5, they sold them online for $8,000 and the rest, as they say, is history--that startup seed has netted Gold Lasso $1.2 million worth of history this year alone.

"My partner actually bid five bucks," Ashery says. "I still have the receipt. It was like a treasure trove in there. We rented a U-Haul, threw it in my garage and said, 'Let's start this company.'"

From Boy to (Business)Man
A lot of entrepreneurs cite divine intervention when it comes to the inspiration for their businesses. But when it comes to startup funding, even the most powerful deity doesn't have much to offer. What almost every religion does have, on the other hand, is some sort of rite of passage for its youth. For Ross Siegel, $400 in savings bonds as bar mitzvah gifts put the then-13-year-old on the path to starting his own private media empire.

"I had some money, and what I would've done with it is spend it on records or something," Siegel, 30, says. "Somebody said to me, 'Ross, we're going to give you money when you're 13, and hopefully by the time you're 20, you can use it for something good, whatever that is.' So I felt I would use this for records, but if I can manage to turn this into a business touching on the music industry, maybe I can turn this into more records. The upshot is that even though I haven't done the magazine in four years, I still get records sent to me to this day."

Siegel heeded the advice. When he discovered the old bonds in a safe deposit box in 1997 while he was a student at Cornell, he bought some desktop publishing software and started Law of Inertia, an Ithaca, New York-based indie music magazine, out of his dorm room.

By 2002, Siegel had moved to New York City to attend film school, and the magazine was bringing in six-figure ad revenues. He was half-heartedly heading toward a career in advertising, but at the time, the job market was tough, so he decided to turn the magazine into his full-time career.

"I didn't know anything about running a magazine, let alone running a business, but I had already built up a really good brand and a really good base," Siegel says. "Part of the problem with the magazine world is that it's so incredibly hard to build up a brand." 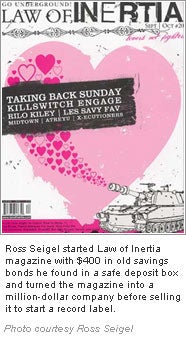 Within a year of that decision, Law of Inertia had 20,000 subscribers and seven figures worth of corporate advertising revenue. Convinced the proliferation of the internet would kill the magazine, Siegel sold it to a record label in 2003 and used the proceeds to start his own record label, ReIgnition Recordings.

Siegel now works in marketing and is looking to start a third business. And all from someone who, when he became a man at 13, had no idea he was also becoming a businessman.

"The real secret to my success is that I was able to learn on the job because I didn't have any real commitment, so to speak," Siegel says. "I didn't have anyone I had to please. I was doing this for fun, and that meant that as long as I didn't lose money, I could do whatever I wanted and I could learn this all at my pace. What this $400 did was give me freedom, because if I lost it, big deal, right? It's just bar mitzvah money. If it didn't work out, I was having a really good time doing it. Because I had this free money that was no-strings-attached, I was able to make a lot of really stupid mistakes. Because of those mistakes, I was able to have way bigger successes."

A Priceless Investment
Not every entrepreneur has the luxury of such a care-free experience when it comes to funding and creating a new business. For Chris Stiehl, the decision to go out on his own after years in corporate America meant forsaking the comfort and stability that his father had been too afraid to give up. It also meant parting with something that seemed priceless to him as a child--complete sets of '40s- and '50s-era baseball cards and memorabilia--but that put him on the path to something that truly was priceless, his dream.

"It was gut-wrenching," Stiehl says. "If you've ever collected anything, you know how tough it is to give something up like that. But it was for a dream that I had. I always wanted to be a guru and an independent consultant and write books and teach and do things that I'm passionate about. I decided that I was more passionate about baseball than I was about the cards, although to be honest, a lot of the cards I've replaced, and that was something I knew I could do. The way I viewed it, it was an investment in me. If you can't invest in yourself, then who can you invest in?"

Stiehl, 58, netted about $25,000 from the sale--nowhere near what the memorabilia was worth in 1998--and used the money to become an independent market research consultant in San Diego. After about a week of sitting in front of his computer wondering if anyone would call, a friend hired him. He was paid about $10,000 for two days' work and knew right then his decision had been the right one. He has since written a book, Painkiller Marketing, and continues to consult and teach. He says the biggest edge he gets from being self-financed is that he answers to no one--well, almost no one.

"The only person I had to convince was my wife, and she was gung-ho and fully supportive of what I was doing," Stiehl says. "She thought it was long since time for me to do this because I'm basically a teacher at heart. I can teach my clients how to do what I do, and it's hard to do that from within a company. The advantage was psychological. Was I scared? Sure. It could've all blown up in my face and I would've lost everything, but at least I would've been gambling on me, and that's the part that stuck with me."

For Ashery, the ability to come up with his own startup money meant far more than peace of mind--it also meant earlier profits, which in turn have given him a long-term competitive advantage.

"What happens to a lot of people is that they get lazy and they say, 'I can't do this without money, and I have to go to funding sources right away to get that money,'" he says. "If you just use a little bit of creativity and find a way to get that initial money and get that prototype, you're going to keep a lot more of your equity farther down the road."

In fact, Ashery says that after people saw his success and what he'd done with "nothing," they were more apt to fund him.

Of course, such creative financing also means that the climb to the top of the mountain is slow and steady. For Ashery, that meant working out of his townhouse in the early stages with overstated addresses on business cards--he was lucky enough to live on Market Street East and added "Fourth Floor" so that his loft location would appear to be a large office--and phone lists embellished with a large, but fictitious, stable of employees. It also meant keeping the story of his creativity under wraps, at least in the beginning.

"It's a hard-to-believe story. But when you're desperate and you want something to work, if there's a will there's a way," Ashery says. "And we found a way. I don't flaunt the story. Now I can because we're stable and we've made it to a certain point, but when we were growing I kept it pretty quiet because there's no way that [larger clients] would've done business with us."

Stiehl says he's still working on replacing the baseball cards he sold but that it's become less of a priority as he continues, even at his age, to mature. Besides, he's still got cards from as early as the 1910s--including a few Babe Ruth cards--that he never sold. But he insists that had it come down to those cards or his irreplaceable self-investment, the decision would have been remarkably easy.

"I think if things had gone differently and I'd struggled, I'd have been willing to part with those, too, because they're just pieces of cardboard with pictures on them," Stiehl says. "Any collector knows that some things are replaceable and some things aren't.my 'a-ha' moment was that I was worth more than any baseball card."

Buy Your Next Used Car Online