A Better Way to Prepare 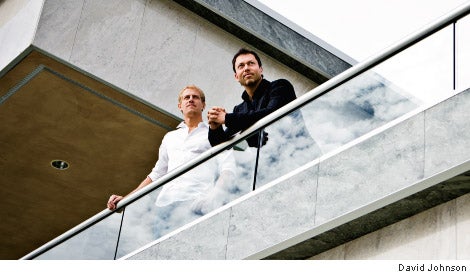 Veritas Prep started with a blank page--at business school, of course--and just six months into its 2002 launch, the company was a veritable success.

Today the firm is arguably one of the most successful brain-trust enterprises in academia. But back in 2000, Markus Moberg and Chad Troutwine were just students at Yale School of Management. Troutwine came from an entrepreneurial household in Independence, Mo. Moberg, the son of scientists, grew up in Norway and came to the U.S. to study computer science and economics, only to discover that entrepreneurship was his true calling.

Troutwine developed the idea for Veritas Prep, an exam training program for business school aspirants, as a project for an entrepreneurship class. After he recruited classmate Moberg to help craft the business plan, the two entered it in a national competition, where it came in third and garnered a $20,000 award. They sunk the winnings into the startup and went full bore. In 2003, the duo traded their New Haven, Conn., dining room for sunny Malibu, Calif.

From the start, the guys found that their chemistry was a key element of the Veritas Prep formula. Troutwine is the salesman, the spokesman and the showman. Moberg is the cerebral scientist, working behind the scenes to handle the more technical details, though the two write all of the company's materials in tandem. "I enjoy public speaking; Markus has an academic background," Troutwine says.

Moberg adds, "We complement each other." And of course, both men scored in the 99th percentile on the GMAT.

Confidence? Check
Troutwine and Moberg are relatively young, definitely good-looking and clearly rich, each appearing to live a bachelor's fantasy life. They dress like the most confident guys in the room: Troutwine in a spread-collar dress shirt, and Moberg sporting a tight black T. Troutwine, 40, hangs out at a nearby mixed-martial-arts gym; Moberg likes to dive into the cold Pacific and reach for the horizon until he's dizzy and disoriented.

Troutwine's black-on-black Lamborghini Gallardo occupies the best space in the lot beneath the pair's 3,000-square-foot glass-framed headquarters, which has a sublime view of Malibu's Surfrider State Beach. Moberg drives a near-500 horsepower, custom-tuned BMW M3 that can give Troutwine's Italian job a run for its money. "Sheriff's deputies pulled me over one day, and I wasn't even speeding," says Moberg, 35. "I was just accelerating, and you could really hear it. The deputy saw my business card and said, 'You must know Chad Troutwine.' " Fast cars beget such introductions.

The Titans of Testing

Other companies like Veritas Prep have taken on established industries:

Apple: The iPhone fused the mobile phone with the computer and forever changed the marketplace, dethroning Motorola's RAZR as the coolest phone ever (though it's still the all-time bestseller).

Beatport: This little-known but visionary retailer, which sells dance music online, quickly distinguished itself by offering CD-quality WAV files of songs without the digital rights management sharing and burning restrictions found on iTunes.

Forever 21: This young women's discount emporium has become adept at taking runway fashion and street trends and turning them into easy-on-the-pocketbook looks. Dance-music filled, display-happy retail spaces make shoppers feel more like they're on Rodeo Drive than in a Kmart.

Google: Google is supplanting Microsoft as the globe's software leader, and it's doing so with free applications such as Gmail and Google Docs, stored in the web's "cloud." Google offers freedom but at the cost of privacy.

Netflix: This web-based upstart took on brick-and-mortar video rental stores such as Blockbuster and won with its no-penalties policy, low monthly fees and quick mail-based turnaround.

Pinkberry: Though the concept was a copy of an overseas trend, Pinkberry was the first with the flavor in the United States. It has helped revive a moribund frozen yogurt retail scene that hasn't seen this much action since the 1980s.

One might reasonably assume these two have a death wish, or at least the blunt mental abilities of your average jock. But looks are deceiving.

Veritas Prep has taken on the titans of advanced-degree training and has helped to prepare tens of thousands of GMAT test-takers. With about $10 million in sales in 2008, the pair says the boutique endeavor now ranks second in GMAT prep--behind Kaplan and ahead of The Princeton Review, which specializes in SATs. Says Troutwine, "We're the elite provider, but we're not elitists."

The three-hour GMAT, with analytical writing, quantitative and verbal sections, is crucial for students who seek admission to business school. Veritas Prep has chosen a price perch--$1,500 for its 42-hour GMAT course--in line with Kaplan and The Princeton Review. The twist? It offers about 50 percent more class time and a stable of instructors that it says is way above the competition, building a reputation as a premium service in a decade when other test-prep outfits have decreased hours and maintained murky instructor hiring standards. The company vows that its class leaders have scored in the 99th percentile on the GMAT. In fact, the firm hires about one in every eight qualified individuals it interviews and then pays them $100 an hour. "We attract the best and brightest," Troutwine says.

Veritas Prep's rise correlates with an increase in GMAT test-takers, which is on pace for a 50-year record high, according to the Graduate Management Admission Council. What's more, millennials have been hitting the advanced-degree market in recent years. It's a cohort used to parental coddling, tutorial handholding and a lifetime of guidance. Veritas Prep, fellow preparation firms such as Manhattan GMAT and a wave of admissions consulting firms are tapping this demand. "Business school is more and more competitive," Moberg says. "And a ton of people are out there trying to figure out how to get a leg up."

The boom extends to India and China, the second- and third-ranked countries for GMAT test-taking behind the U.S. The Asian nations have given ample business to test-prep and consulting outfits and could provide even more opportunities for people with the skills required to launch helping-hand enterprises, experts say. "We're just a rare business that will continue to do well in this economy," Troutwine says. "It's nice to know our employees don't have to worry about their jobs."

Veritas Prep's core business is GMAT training--it offers courses in 80 cities across 21 countries--but it has expanded into online courses and law school admissions consulting. It is launching medical school admissions consulting this summer. The two are mindful that their courses can add another layer of advantage to the so-called haves in life, so they gave away 24 full scholarships and more than 25 half scholarships in 2008 to the have-nots. They've also given discounts to some affiliates of minority- and women-focused MBA associations.

They wouldn't be able to offer the scholarships and discounts without being laser-focused--at work anyway. "When we're at the office, we bust our asses," says Troutwine. "Then, two to three times a week, I kick people in the face at the gym. I'm living the dream."