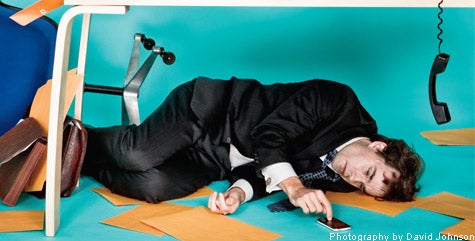 Within the heart of your company, saboteurs lurk. Disguised as instruments of productivity, they are subverting your staff's most precious resource: attention. Incessant e-mail alerts, instant messages, buzzing BlackBerrys and cell phones are decimating workplace concentration. The average information worker--basically anyone at a desk--loses 2.1 hours of productivity every day to interruptions and distractions, according to Basex, an IT research and consulting firm.

That time is money. Computer chip giant Intel, for one, has estimated that e-mail overload can cost large companies as much as $1 billion a year in lost employee productivity. The intrusions are constant: each day a typical office employee checks e-mail 50 times and uses instant messaging 77 times, according to RescueTime, a firm that develops time-management software. Such interruptions don't just sidetrack workers from their jobs, they also undermine their attention spans, increase stress and annoyance and decrease job satisfaction and creativity.

The interruption epidemic is reaching a crisis point at some companies and shows no sign of slowing. E-mail volume is growing at a rate of 66% a year, according to the E-Policy Institute. More people are texting. More are using Facebook or Twitter for work.

"It's worse than it's ever been," says Michelle Rupp, owner of NRG Seattle, an insurance brokerage with a staff of 12 who feel pounded by the avalanche of messaging. "It's so hard to stay focused. Everything bings and bongs and tweets at you, and you don't think."

Yes, it is possible to blunt the interruption assault. But business leaders must go on the offensive in a realm most are oblivious to: interruption management.

The Myth of Multitasking
Human brains come equipped with two kinds of attention: involuntary and voluntary. Involuntary attention, designed to be on the watch for threats to survival, is triggered by outside stimuli--what grabs you. It's automatically rattled by the workday cacophony of rings, pings and buzzes that are turning jobs into an electronic game of Whac-a-Mole. Voluntary attention is the ability to concentrate on a chosen task.

As workers' attention spans are whipsawed by interruptions, something insidious happens in the brain: Interruptions erode an area called effortful control and with it the ability to regulate attention. In other words, the more you check your messages, the more you feel the need to check them--an urge familiar to BlackBerry or iPhone users.

"Technology is an addiction," says Gayle Porter, a professor of management at Rutgers University who has studied e-compulsion. "If someone can't turn their BlackBerry off, there's a problem."

The cult of multitasking would have us believe that compulsive message-checking is the behavior of an always-on, hyper-productive worker. But it's not. It's the sign of a distracted employee who misguidedly believes he can do multiple tasks at one time. Science disagrees. People may be able to chew gum and walk at the same time, but they can't do two or more thinking tasks simultaneously.

Say a salesman is trying to read a new e-mail while on the phone with a client. Those are both language tasks that have to go through the same cognitive channel. Trying to do both forces his brain to switch back and forth between tasks, which results in a "switching cost," forcing him to slow down. Researchers at the University of Michigan found that productivity dropped as much as 40 percent when subjects tried to do two or more things at once. The switching exacts other costs too--mistakes and burnout. One of the study's authors, David Meyer, asserts bluntly that quality work and multitasking are incompatible.

Brian Bailey and Joseph Konstan of the University of Minnesota discovered that sleeve-tugging peripheral tasks triggered twice the number of errors and jacked up levels of annoyance to anywhere between 31 percent and 106 percent. Their interrupted test workers also took 3 percent to 27 percent more time to complete the reading, counting or math problems. In fact, the harder the interrupted task, the harder it was to get back on track. (A Microsoft study suggests it takes a worker 15 minutes to refocus after an interruption.)

The damaging effects spread well beyond the office cubicle. Kate LeVan, a communications consultant in Evanston, Ill., coaches executives whose brains are so scrambled by electronic interruptions that they stumble during key face-to-face interactions: board meetings, investor pitches, sales presentations. "They can't have an extended conversation for more than a few minutes," LeVan says. "That's the impact of having all this data going back and forth. They have problems in conversation because they can't focus."

Here's how the brain behaves when your attention slips away from a task: The hippocampus, which manages demanding cognitive tasks and creates long-term memories, kicks the job down to the striatum, which handles rote tasks. So the gum-chewing part of the brain is now replying to the boss's e-mail. This is why you wind up addressing e-mails to people who weren't supposed to get them. Or sending messages rife with typos.

The striatum is the brain's autopilot. And no part of your business should be allowed to run on autopilot.

Paying Attention to Paying Attention
In her 2009 book Rapt, Winifred Gallagher argues that humans are the sum of what they pay attention to: What we focus on determines our experience, knowledge, amusement, fulfillment. Yet instead of cultivating this resource, she says, we're squandering it on "whatever captures our awareness." To truly learn something, and remember it, you have to pay full attention.

E-interruptions are making it so hard to do that that Google, Microsoft, IBM and Intel are members of the Information Overload Research Group , formed in 2008 to collaborate on research, develop best practices and host forums to share new approaches. It's self-preservation as much as anything; computer engineers were among the first to show symptoms of e-interruption exposure.

Ten years ago, Harvard Business School's Leslie Perlow famously chronicled the interruption of a high-tech software company. Its engineers were interrupted so often they had to work nights and weekends. After studying the workplace for nine months, the source of the dysfunction became clear: No one could get anything done because of the bombardment of messages. Perlow came up with an intervention: Quiet Time. For four hours in the morning, the 17 engineers worked alone. All messaging and phone contact was banned. In the afternoon, communication could resume. Given time to concentrate, the engineers got a project for a color printer completed without the graveyard shift.

Intel is using Quiet Time at two of its sites. Other companies, including U.S. Cellular and Deloitte & Touche, have mandated less e-mail use, encouraged more face-to-face contact and experimented with programs such as "no e-mail Friday." The results often are surprising: employees build rapport with colleagues--and they save time. Co-workers can settle something in a two-minute phone conversation that might have required three e-mails per person. Each change reverberates throughout a company, especially since--as a University of California, Irvine, study found--44 percent of interruptions an employee experiences are from within the company.

Nearly everyone needs such boundaries to get anything done in this 24/7 work world. Count Chad Willardson among the converted. He's a senior financial advisor at Merrill Lynch Private Wealth Management Group and operates a financial services practice with a partner for Merrill in Riverside, Calif. He used to check for new messages every five minutes, a potential 96 interruptions during an eight-hour day.

"The more I checked e-mail," he says, "the more anxious I would feel over every request and question." Now he checks e-mail manually, and only four times a day at prescribed hours--the schedule that Oklahoma State University researchers describe as optimum. He says he gets a lot more done, is more in control of his calendar and feels much less stressed.

In fact, stress-management seminars often reveal executives driven to wits' end by their own inboxes. During one session at the aerospace company Lockheed Martin, many managers vented this frustration--until one raised his hand. "It's not a problem for me," he said. "I've gotten my e-mail checking down to twice a day."

He explained that his staff knew he preferred to communicate by phone and they don't send him e-mail unless it's important that the information be in writing. And because he checked e-mail only twice daily, they had been weaned from the idea that they'd get an instant reply.

Chances are this wasn't just good for the manager, but for all his employees, too. By modeling interruption-management, he was likely reducing the volume of interruptions throughout his division. Everyone understood that he viewed excessive messages as a drain on his performance--and by extension, theirs.

One thing was clear that day at Lockheed: When the manager volunteered his solution, it was as if he'd levitated. Other managers looked stunned. And envious.

Joe Robinson, a business coach and trainer, is the author of Work to Live and the audio CD The Email Overload Survival Kit.