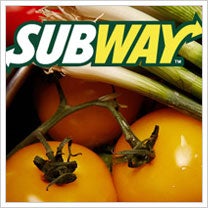 There are lots of reasons to love franchises. They give people the chance to own a business, they create jobs, and they produce many of the goods and services that we use every day. And now there's one more reason to love them: A franchise could save your favorite TV show.

That's what happened last week, as NBC announced that it would bring back the struggling but beloved action-comedy series Chuck-- with a little help from franchise heavyweight Subway.

When fans of the sophomore series learned that it was in danger of cancellation, there were the usual online petitions and letter-writing campaigns, but such efforts are rarely enough nowadays to get a network's attention. So fans decided to put their money where there mouths were-- literally-- by appealing to Subway for help. The sandwich franchise was one of the show's biggest advertisers, and even received some prominent product placement in a recent episode.

Thus the "Finale & Footlong" campaign was born. On April 27th, the night the season finale aired, fans visited their local Subway franchise, purchased $5 footlong sandwiches, and left notes about the campaign to save Chuck in the store's comment box.

After the finale, fans continued to court Subway by donating to one of the company's favorite charities, the American Heart Association, in the name of the show's main character, Chuck Bartowski. By the time NBC was ready to unveil its fall schedule, almost $17,000 had been donated through this "We Heart Chuck" campaign.

It seems that execs at both NBC and Subway were listening, because the network announced a deal with the sandwich franchise to bring the show back for at least 13 episodes. Part of the deal involves further integration of Subway into the show, which should be easy enough given Chuck's strip-mall setting.

So Chuck viewers are happy, and NBC is happy that they're happy, but the big winner in all of this looks to be Subway. Loyal fans of the series will show their gratitude by becoming loyal Subway customers, and when the slated 13 episodes are up, they'll be back at the franchise's doors in full force, using their wallets to once again ask for more. Plus, even casual viewers will be getting an eyeful of Subway's sandwiches, (and probably an earful of its slogans,) with every episode.

The question now is this: Is this a unique, one-time event, or have Subway and NBC started a trend? With the successful salvation of Chuck in mind, fans of other on-the-bubble shows will almost certainly try to copy the strategy of lobbying for renewal with the shows' big advertisers. And many of those advertisers will be franchisors. So, will they follow Subway's lead? If they do, they could forever change the type of interaction that goes on between advertisers and TV networks-- not to mention their customers and viewers.