Don't Fall for a 'Vanity' Scam 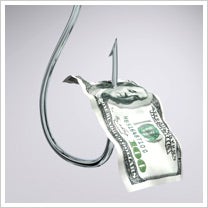 Usually, falling prey to your own vanity is a harmless affair. But it turns out, scams exploiting one's sense of pride are among those that are aimed at small-business owners.

"Vanity awards" were on the Better Business Bureau's recently released list of the top scams that target small businesses. The scam involves approaching people about receiving a business or leadership award or the opportunity to be added to a biographical directory patterned after the "Who's Who" publications. Often, those people are required to pay either the total or a partial amount of the cost of receiving the award.

"Many of these offers come from bogus, worthless organizations," says Claire Rosenzweig, president and chief executive, Better Business Bureau of Metropolitan New York. "Businesses that consider these offers need to know that their award may have no significance in the marketplace, other than the self-satisfaction of seeing your name in print or on a plaque." Rosenzweig says the BBB's New York Metropolitan council tracks 11 organizations that it considers "vanity publishers." While some have positive ratings and others don't, most have had complaints registered against them. For instance, a Deer Park , N.Y. business called Kipling's Who's Who carries an "F" rating (on a scale from A+ to F) and has 42 complaints filed against it over the last 36 months, concerning billing, collection, selling practice, refund, exchange and other issues, the BBB says. Of those complaints, only 22 have been registered as rectified.

Avoiding the Scam
Rosenzweig advices that business owners be skeptical when solicited about receiving any type of award or being included in a directory. "Questions you should ask include whether the organization is legitimate and professional, and if the offer is going to cost you money," she says. "You need to do research about the organization. There are no freebies with these types of programs."

If you do consider one of these awards offers, it's important to read the terms and conditions before agreeing to anything. "Sometimes, even after someone figures out that the company is bogus, they find that they aren't able to stop the charge from going through on their credit card," Rosenzweig says. "Others find out later that they're being charged a yearly, membership type of fee."

According to the complaints she has received, Rosenzweig says these scams can cost a business owner anywhere from a few hundred dollars up to a couple thousand. "If you really want a plaque with your name on it, it would be more worthwhile to make one yourself," she says.

Have you ever been solicited about a vanity award and considered doing it?
More from Entrepreneur