The founder of Spanx opens up about what drives her -- and the critical life lesson she learned early on.

Sara Blakely is a soft-spoken businesswoman with steel will. In the 1990s, she spent seven years selling fax machines, often so terrified of approaching prospects that she burst into tears and had to drive around the block to regroup. But she persisted, always thinking one day she would dream up her own product to sell. That day came in 1998, while putting on pants in front of the mirror and not liking her rear view. She decided to wear her usual control-top pantyhose underneath -- but cut the feet out. The svelte difference led Blakely to patent her own footless body-shaping pantyhose. Two years later, she founded Atlanta-based Spanx Inc., which went on to introduce more than 200 types of body-shaping garments -- ranging from Mama Spanx to swimwear and, most recently, Spanx for Men. Today, Spanx is a multimillion dollar company with 105 employees, selling its slimming garments in nearly 10,000 retail locations around the world.

In the edited interview excerpts that follow, Blakely, now 40, offers insight on the resilient mindset that let to her entrepreneurial success.

Sara Blakely with the lucky red backpack she carried everywhere she went.
Photo courtesy of the company

'Aha' moment: When I cut the feet out of my pantyhose that one time, I saw it as my sign. I had been visualizing being self employed prior to this happening. It was my mental preparation meeting the opportunity in that moment.

Roots of resilience: I listen to motivational tapes and my favorite is an early series by Wayne Dyer, How to Be a No-Limit Person. When I was 16, I saw my good friend get run over by a car and killed. Around the same time, my parents separated, and my dad handed me that series, and said, 'I wish someone gave this to me when I was your age instead of having to discover it when I was 40.' I memorized all 10 tapes. It's my go-to gift for people I care about.

Earliest entrepreneurial memory: When I was 7, I came up with the idea of 'charm socks.' My mom would take me to buy bags of plastic charms, we would sew them on frilly white socks, and I sold them at school.

Life lesson learned as a child: My dad encouraged us to fail. Growing up, he would ask us what we failed at that week. If we didn't have something, he would be disappointed. It changed my mindset at an early age that failure is not the outcome, failure is not trying. Don't be afraid to fail.

Best cold-calling tip: Try to make them laugh or smile. If you can do that, you always get another 15 seconds. Spend it saying why you're better than the other options. Differentiation in those first moments is crucial. When I invented Spanx I heard 'no' for two years. It didn't faze me. I didn't have a special ability, it was sheer drive and telling myself to keep going.

Instant attitude adjustment: Eminem's 'Lose Yourself' is my go-to song to pump myself up if I'm having a tough time or if I get really nervous right before a speech.

If I knew then, what I know now… I would have done better due diligence on key manufacturers from the beginning. In the early years, one of my manufacturers went under and gave me only about four days notice.

Secret quirk: I'm obsessed with Japanese steakhouses. My favorite is Nakato in Atlanta. When I'm in town, sometimes I'm there three nights in a row.

'Uh-oh' moment: On the BBC, I was asked what Spanx could do for women in the U.K. I said, 'It smoothes and separates your fanny.' The interviewer looked mortified. I had no idea what was going on, so I kept rambling on about fannies until he stopped me and said, 'I think you mean bum.' The word fanny means vagina in England. I had never used the word fanny before then. I guess I thought it sounded very English. (Laughs.)

I'm inspired by… people who create something out of nothing. Richard Branson and Oprah had nothing handed to them and made their own way. 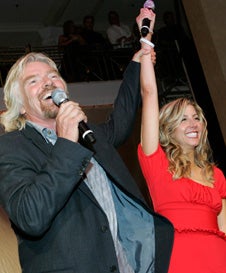 Favorite pastime: I recreationally think. [Before I launched Spanx,] hours would go by just sitting on the couch thinking and asking myself a lot of important questions to assess what I was good at.

Lucky charm: I found my lucky red backpack from college in my mom's attic and became determined that it was going to change my path for Spanx because I kept hearing no, no, no. It went with me every step of the way, to the point of being made fun of because I went to Neiman Marcus headquarters with this old backpack as my presentation bag. Now, with the Sarah Blakely Foundation, every woman we send to college or help start a business receives a lucky red backpack. They're usually more excited about that than the money, which I totally get. The backpack is a symbol of their potential.