Building a (Nearly) Million-Dollar Brand on a Startup Budget

How Perky Jerky has taken its caffeine-infused recipe to the masses. 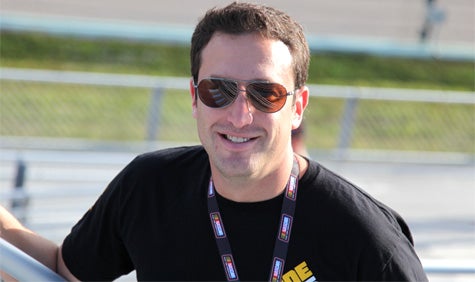 Brian Levin loves being called a jerk. Especially when he's roaming the grounds at a NASCAR race while wearing the "jerk suit," a get-up outfitted with up to 900 pull-off bags of jerky. Yes, jerky. Two years ago, Levin founded Perky Jerky, a new meat snack infused with a caffeine kick. Levin says wearing the jerk suit is one part of a larger strategy to give the fledgling brand exposure, and to "get meat in as many mouths as possible."

"Gaining mainstream momentum is difficult when you're working on a startup budget, so we came to the conclusion that we need to win people over by getting them to taste the meat," says Levin, who is 38. "At the same time, we're creating a fun, exciting experience around the brand."

So far, Levin's guerilla marketing seems to be paying off. In its first full year of business in 2010, Denver-based Perky Jerky generated just under $1 million in revenue and the company is close to breaking even. Levin attributes much of the early success to winning over customers as well as big retail outlets like Home Depot and Sports Authority, which are now selling the product in stores. Levin has high aspirations for the company's marketing efforts, and projects the company could take in as much as $10 million in sales in 2011.

Levin declined to comment on how much the company spends on marketing, but says it makes up a large percentage of the company's overall operating budget and will continue to through at least 2012. "It is crucial for us to build brand recognition quickly, and exploit our 'first-mover' advantage," he says. "Now that we have national distribution, it's gotta move off the shelves."

Tapping into the meat-snack industry as well as the caffeine-products market could come with a set of challenges and opportunities, says Harry Balzer, chief industry analyst for consumer marketing research firm the NPD Group. "No doubt, we are a meat-eating nation, but in terms of meat snacks, only about 1% of Americans -- predominantly young males -- will eat a meat snack in a day," he says. "However, there are a lot more people who, on a day-to-day basis, consume caffeine. While getting a small share of the meat snack market could be a very small business, getting a small share of the caffeine market could an interesting, promising business."

Getting Cooking
Perky Jerky's creation story is arguably as wacky as its name. Levin dreamed up the idea in 2006 when he and a buddy were skiing at Utah's Snowbird resort. Sitting on a chairlift one cold morning, Levin discovered that an energy drink had spilled inside his bag and drenched an open package of spiced beef jerky. Levin ate the jerky anyway, and found that it retained its flavor but was tender and had a caffeine jolt, thanks to the energy drink.

"It was an 'aha' moment, when two great tastes came together in harmony," Levin says.

But Levin had never made jerky, and had no clue how to infuse it with caffeine. His background includes serving as a brand and sales manager at Jagermeister and Grey Goose vodka in the mid-1990s. In 2000, he launched Mobliss, a mobile company most noted for building the SMS voting services originally used by American Idol. Levin sold Mobliss in early 2004 for $15 million to Index Corp., a Japanese mobile services company. Two years later Levin started location-based services company Useful Networks, which was acquired by Liberty Media early the following year.

So, how does a mobile-tech entrepreneur become a beef-jerky baron? First, Levin raised about $2 million in startup funding from friends, family and venture-capital investors. Next, he partnered with jerky maker Kenny Croucher, who cooked up the recipe. Perky Jerky is made of U.S. top round beef (it also comes in turkey), soy sauce, brown sugar, lemon juice and garlic, among other ingredients. Another ingredient is guarana, a tropical plant that contains caffeine and is used in a number of energy drinks.

"Other jerkies are loaded with preservatives and MSG [monosodium glutamate], and they're dry and taste like shoe leather," Levin says. "We want to take jerky high-brow. Perky Jerky is tender and tastes like filet mignon."

Breaking into the Big Stores
With the recipe down, Levin turned his attention to marketing and distribution. He got a break early on when a small distributor in Hawaii and Alaska -- a family friend -- persuaded several large retail stores to carry Perky Jerky in those states. "He called us and said he'd been passing [Perky Jerky] around and that he got it into Wal-Mart, Target, Home Depot, Sportsman's Warehouse and Safeway," he says. "It blew us away."

The product sold well, Levin says, and Home Depot agreed to carry Perky Jerky in about 1,500 stores nationwide. Among other outlets, Perky Jerky will be available in more than 1,400 Target locations this summer and Levin expects to have it in 7-Eleven stores, too, before the end of the year. He says he wants to "take things slow and build scale" before pushing for national distribution in Wal-Mart stores.

"Breaking in is difficult," Levin says. "Big retailers have thousands of people calling them every day announcing their own 'world's greatest' product. And product managers want to see performance numbers, but you can't show them anything when you're new. The only way around that is by being persistent and having a product that people demand, so that they have no choice but to sell it. … With Wal-Mart, we want to make sure we can handle the volume before going that route."

To help drum up demand, Levin looked back for inspiration at his days at Jagermeister. "The marketing we did at Jager was promotion at bars and stores, with 'brand ambassadors' going around giving out trinkets and getting people to try the product," Levin says. "That's what we're doing at Perky Jerky. . . . For us, it's about brand marketing on a mass individual basis, so to speak." 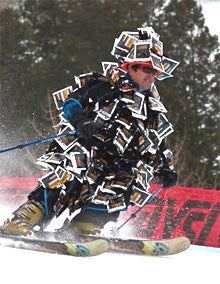 Brian Levin in the jerk suit.
Photo courtesy of the company

The first place Levin took the brand was to the 2010 Winter X-Games event in Aspen, Colo., where he set up a 10-by-10-foot tasting tent. Then came last year's Sundance Film Festival in Park City, Utah. Levin's biggest coup came last year when he landed a contract to participate in 20 NASCAR events. He declined to disclose how much the contract cost, but says it offers Perky Jerky the highest CMP -- or "cost per mouth." "We could get in front of 100,000 people at a football game, but it would cost 10 times as much [as he's paying NASCAR] just to get in there," he says.

Building national recognition and distribution has been a tough slog over the past year-and-a-half, Levin says, but he's hopeful that the brand might someday expand globally. "It's all about perseverance," he says. "You have to be the biggest believer that the product or service you have is the best thing out there. You get told 'no' a lot. You need to go after every possible opportunity."

Apparently even if that opportunity requires wearing a suit covered in beef jerky.