Guy Kawasaki on the Art of Enchantment

The business guru shares his views on how to be really winning.
Next Article Add to Queue 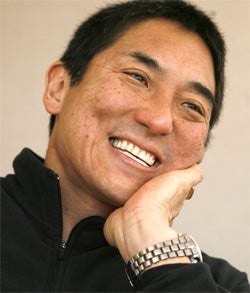 Entrepreneurship is synonymous with selling, and being enchanting about it--by influencing behavior in "ethical, long-lasting ways"--will help you sell, says Guy Kawasaki, founding partner at Garage Technology Ventures, co-founder of Alltop.com and Apple Computer's former chief evangelist. He's also the bestselling author of 10 books, including, most recently, Enchantment: The Art of Changing Hearts, Minds, and Actions, chock-full of usable startup and social media tips on how to do just that.

Entrepreneur asked him to elaborate on a few things--and whether he thought "Guy Kawasaki" was appropriately enchanting. His answer: "Anyone who proclaims that he's enchanting, by definition, isn't. It's like bragging that you're modest."

Got it. But considering his 320,000-plus Twitter followers, we're pretty sure he's both.

You write a lot about using social media, but is it possible to enchant customers without it?
Absolutely. Social media is one method, albeit a powerful and cheap one. The three pillars of enchantment are likability, trustworthiness and a great product or service. If you have these down pat, you could rub two sticks together and enchant people. If you don't have these three, you could spend thousands of hours and dollars on a "shock and awe" social media campaign and still bomb.

But social media can seem daunting to newbies. Is it always worth the effort?
Most of us … need to use every tool we can to establish ourselves--ergo, social media. Or, to use a political analogy: A [despot] doesn't need Twitter. The protestors do.

What about the excuse that it takes too much time?
How valuable is your time? Very valuable. But how valuable is making sales? Social media is marketing, and marketing is a core activity of companies. You can sit by the side of the river for a long time before a roast duck flies into your mouth, or you can gain thousands of followers and fans. You've got to go out there and enchant.

I've also heard business owners say they just don't get it.
These owners should give themselves a break. Think back a decade or so. Did everyone immediately "get" websites? Not even the creators of the Internet saw its commercial potential. I doubt they foresaw a day that people would be buying shoes from Zappos and tweeting about tacos. The point is to just jump in and explore. It will pay off in the long run.

Entrepreneurs walk a fine line between sticking to radical visions and catering to the crowd. How do they reconcile these two things and still be enchanting?
My theory is that you should build the product that you want to use, hope that there are others like you and do your damnedest to enchant them. This would describe the origin of the great tech successes like Apple, Yahoo and Google. The real-world way to reconcile this is to declare victory and say, "We knew that people wanted this" after you succeed. If you fail, it won't matter what you say, because no one listens to losers.