How to Be a Gaming Entrepreneur

So you want to launch the next Farmville? Here's how, as told through a game-design document.
Next Article

Overview
It is the year 2011, and you are a cubicle farmer who dreams of fame and fortune. Smartphones and social gaming platforms like Facebook have given everyone--even you, especially you--a shot at making millions with a hit game.

You've heard the tales of Zynga and Rovio: The first rose from humble startup origins in 2007 to become the overlord of Facebook gaming with offerings like FarmVille and Mafia Wars, and now boasts a valuation of roughly $10 billion. The latter is responsible for the Angry Birds iPhone game, which morphed into a multimillion-dollar franchise, complete with multiplatform apps, plush toys, console titles and a feature film in the works, all within a year and a half.

Now it is your turn.

Play Modes: On your quest to become a video game entrepreneur, play using one of the three gameplay modes: beginner, intermediate or advanced.

Experience Level: Beginner
Description: For novices with no gaming background, casual, Flash-enabled game titles are best because they are easiest to develop and distribute.

Base: A brightly painted two-room space in downtown San Francisco and a 10-person office in Manila, Philippines.

Story: Van Gool quit PR to do something "fun and somewhat recession-proof." He came up with a money game concept: Potty Racers, featuring a stick figure wheeling a porta-potty down the hill and jump-flying it as far as possible without--er, spilling it. Obviously, his pitch to Nickelodeon's Addicting Games Network was successful.

Stats
30+: Flash and iPhone games published or under development

Items
Developer. Van Gool found a great developer by browsing portfolios on FlashGameLicense.com. He chose wisely: From start to finish, it took six weeks to complete the game.

Publisher. He scored a licensing deal with MTV Networks, which, fortunately, promotes the hell out of Potty Racers. But, van Gool says, he would have taken any publisher for his first game just to get it out there. Barring that, he would have handed out the game for free and hoped it got enough attention to score him a deal on a second game. (Hint: "Hang on to as much intellectual property as you can, in case the game takes off and becomes franchise-worthy.")

Mochibot. Van Gool uses this free service to track how many times a game is played and how many websites have picked it up. Mochi ads are also a way to earn a little extra money at first.

Challenge: To maintain control over Gonzo Games' intellectual property, van Gool wants to grow with little or no outside funding, which means he has to plug revenues right back into the company, making growth slower and business riskier.

Strat: Research. Every game element is strategic. Van Gool looks into popular themes, trends and game mechanics (stick figures, poop, jump flights) to find out what people like to play. The result? He says 80 percent of his games are successes.

Upgrades: Introduction of freemium game elements, starting with the summer release of Potty Racers 3; plans to hire another five people in Manila and an executive in San Francisco; experimenting with different platforms and longer gameplay formats. 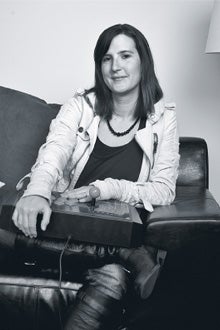 Description: For those with game development skills, creating a unique console game title could capture the attention of a major console publisher looking to stock digital shelves.

Base: A narrow, second-floor corner unit owned by Sony in Santa Monica, Calif., with a fully equipped test-play room that doubles as a lecture hall for staff lunch presentations on Wednesdays. (Chen's last contribution: "The HiStory of China." Yep, all 5,000 years of it.)

Story: The pair spun tgc out of their final school project, Cloud, a free, downloadable PC game that experimented with a different kind of gameplay: one with no death or time limits that still provided an emotional experience. The title, about a boy in a hospital bed dreaming of flying through the clouds, went viral, with 350,000 downloads in three months. Sony came knocking.

7x: How much more expensive the production costs were for Journey versus flOw

Items
Prototype. According to Santiago, in order to get into console games, they needed to have made a console game. (Hint: "At the very least, you should prototype early ideas in Flash to have something to show at competitions and festivals.")

Playtesters. They had to prove that people wanted to play their games by getting them into playtesters' hands. Santiago says they recruit from universities and online developer communities like TIGSource.

Designer-producers. Unlike at other studios, all tgc employees are designers and producers. After all, Santiago says, to make a different kind of game, you have to make it with a different methodology.

Challenge: A post-PlayStation future. Tgc will have to tackle more than one project at a time and figure out where to evolve next.

Strat: Positioning. Tgc stands out because the company deliberately makes games that other studios don't--ones that have a "unique voice and viewpoint on the world." Pitting themselves against everyone else would put them at a huge disadvantage.

Upgrades: Looking into rich opportunities in casual gaming on phones and browsers.

Description: Developers with the skills to impress YouWeb founder Peter Relan with their social game concepts will benefit from his Midas touch. But the pressure's on: Says Relan, "I'm looking for the next Zuckerberg, the next creative genius that will change the world."

Character 1: Suren Markosian, co-founder of CrowdStar, the social gaming company that developed Happy Aquarium and It Girl and is Zynga's closest competitor.

Spec: Telepathy. Can sense what different markets want. Even middle-aged women from Texas.

Stats
Power: 150 employees by the end of this year, up from two in 2008; the company is profitable and has more than 100 million gamers.

Strength: CrowdStar is experimenting with different platforms and will release its first mobile games this year.

Spec: Superhuman strength. Can stay awake for several days straight when working on a project.

Stats
Power: The company launched in December, but already has deals with game companies representing around 40 million players.

Strength: iSwifter is doubling the number of employees to 10, stat.