Savvy Marketing Turns a Hobby into a Successful Business

How the founders of the YOLO Board have glided to the front of the stand-up paddling crowd.
Next Article Add to Queue

Jeff Archer refuses to let my limited coordination and athletic ability get in the way, so our interview will take place while paddling Florida's Pensacola Bay. Archer, one of the founders and owners of YOLO Board, sets me up on one of the company's easy-to-balance YOLO Yaks, a surfboard-kayak hybrid. It's clear, as we glide across the water, that Archer relishes his role as an ambassador for stand-up paddling (which goes by the hip acronym "SUP") as much as he does his job at one of the growing sport's most innovative companies.

On the East Coast, the YOLO brand is synonymous with the sport. "They have done excellent marketing," says Shawn Brown, co-owner of Outdoor Gulf Coast, a Pensacola, Fla.-based website. "Even if it is not on a YOLO board, someone will say, 'I see someone out there YOLOing.'"

Before starting YOLO, Archer and Losee each ran their own businesses; Archer worked in furniture importing and sports apparel, Losee in landscaping and coffee retailing. Their warehouses were near one another, and the men­­--both active fathers in their 40s--were interested in learning SUP with their families.

Others might have borrowed some boards to check out the sport, but Archer and Losee decided to design one instead. The team's prototype board was wider, longer and more stable than a traditional SUP board, a decision that contributed to YOLO's success.

"We think 85 percent of the market is coming from beginner paddlers, and we wanted those people to be able to stand up right away, when stationary, go out on the lake and see an eagle or paddle with the dolphins their first time out," Losee says.

YOLO, itself an acronym for "You Only Live Once," now sells 18 different boards to accommodate various types of water, as well as different paddler body types. Prices start at around $700 (near the industry standard for an entry-level board) and peak at $2,000 for the premium model. 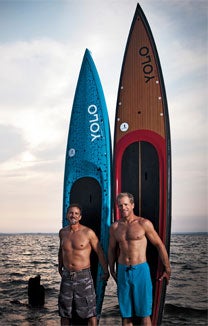 Other YOLO revenue streams double as marketing tools that reach recreational paddlers and racers, pros and other hard-core surfers. Losee leads YOLO-branded stand-up paddling demos and lessons, and offers board rentals at a resort community in Florida. YOLO, a sponsor of well-respected national races and events, created an iPhone app to help people find SUP events. "They really embody this sport," says Andre Niemeyer, president of social networking site SUPConnect. "They are reaching one stand-up paddler at a time."

The company has carefully built relationships with about 70 exclusive dealers across the U.S., Costa Rica and other international points, preferring to expand slowly. In the future, YOLO may branch out into apparel (in addition to the T-shirts it now sells), boards for land paddling and other products that fit with the YOLO mind-set. The team is looking to solidify the market in the Southeast, particularly in non-coastal areas.

"In the U.S. we've built this regional strength in the Southeast and we're sowing the seeds for the West and Midwest," Archer says.

YOLO won't disclose revenues, but in the second quarter of 2010 it turned a profit, and, four years after launch, Archer and Losee no longer had to fund the company from their savings. Sales in the first quarter of 2011 were double those of the same period in 2010, Archer says.

Losee, a former owner of Hub City Coffee Co. in Hattiesburg, Miss.--which boasted the city's first drive-through coffee shop--sees a parallel between that effort and what YOLO has pioneered. "Just like I turned people on to lattes and bagels in Mississippi," he says, "I am turning them on to stand-up paddling."