How One Online Retailer Tweaked Its Way a Better Sales Future 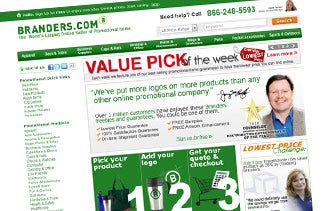 Branders.com co-founder and CEO Jerry McLaughlin was worried about first impressions. After analyzing the metrics for his promotional product company's website, he discovered that many first-time visitors to Branders.com started their experience on subcategory pages instead of on the homepage. And the subcategory pages for the Mountain View, Calif., company's site weren't as carefully crafted. He also had concerns about the site's conversion rate--customers were leaving way too many T-shirts, coffee mugs, pens and other logo-emblazoned tchotchkes behind in abandoned online shopping carts.

So, McLaughlin and his team set out to find solutions. They're no strangers to tweaking the site; the Branders.com staff makes more than 100 changes to the site each year in an effort to increase registrations, calls and sales.

The Fix
Modeling their changes after Amazon.com, Branders moved some of the homepage branding features onto subcategory pages and added a testimonial about its low prices near the top of each page. The layouts were also changed to more closely mirror the homepage. To increase conversions, Branders.com capitalized on research that showcased the power of a human element on online sales. The team tested two images of sales reps, "Gabe" and "Jade," next to near-identical toll-free numbers.

The Results
Rebranding the subcategory pages increased registration by an impressive 20 percent. Adding customer service rep photos near the 800 numbers worked, too. But the most surprising part here was the disparity between the reps: Gabe's image bumped visitor-to-call rates an impressive 10 percent, but Jade's photo was the real charmer--she increased the rate by 21 percent.

A Second Opinion
Alan Mazzan, founder of Mazzan Design Group and experience strategist at digital agency VivaKi, wasn't surprised by the substantial increase generated by the subcategory redesign. He notes that the control version had a minimal focus on registration, while the revamped page had some powerful motivators, including a $50 discount associated with registration, customer testimonials and a free sample offer next to each item.

Mazzan also gives a thumbs-up to the human element added to the toll-free numbers, noting that the "real" people (instead of stock models) make them seem more accessible. He does, however, think one more tweak may be in order: a copy change to a more service-focused "Do you need help with your order?"