'Pursuit of Happyness': Chris Gardner on Reinventing Yourself

By Michelle V. Rafter September 30, 2011
Opinions expressed by Entrepreneur contributors are their own. 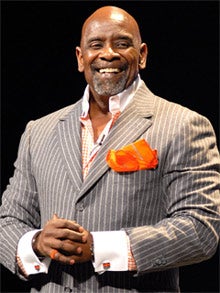 Gardner's journey from homeless dad to millionaire stockbroker was the basis for his autobiography, The Pursuit of Happyness, and the hit 2006 film of the same name starring Will Smith.

People who lost a job during the recession might not be living in a subway bathroom like Gardner did. But they may feel just as desperate, the 57-year-old Gardner told a crowd of several hundred at AARP's recent Life@50+ convention in Los Angeles.

Though he's come a long way since his homeless days, Gardner is still reimagining his life and facing obstacles doing it. In the middle of last decade, he spent four years and millions of dollars to launch an investment fund supporting South African business development. But the global recession killed his project before it got off the ground. Now he's starting over with a different plan and new business partners, he told the crowd.

Your struggles to earn a living might be different from his or anyone else's, but Gardner says the answer to pulling yourself up is the same. Find something you're passionate about and go for it. "Maybe it's not time for us over 50 to be finding a job," but instead finding a career to create, Gardner says. "Maybe it's time to find our button and push it."

Here's his advice for people contemplating a midlife reinvention:

1. "Ain't nobody gotta dig it but you." Forget what other people think or say. Do something that makes you happy. "We're afraid that because everybody might not like it" we shouldn't do it, Gardner says. "But you gotta push that button."

2. Go with what you love, but stay grounded. "Probably the hardest question I get asked is 'How do I choose between passion and practicality?'" Gardner says. "I can't answer that. I had to do both. I was passionate about pursuing a career in financial services. But I was also passionate about feeding my child."

3. Start a business. Gardner added his voice to the chorus of experts who see a wave of small-business startups run by baby boomers pushed out of Corporate America due to ageism or the bad economy. That's OK, he says, because entrepreneurs over 50 are in a better position than younger workers to capitalize on their "reputations and Rolodexes." It's the start of a creator economy, he says, "with a whole lot of folks being entrepreneurial."

4. Have a plan. If you're starting a business, hope isn't enough. You need a plan that's clear, concise, compelling and consistent. On top of that, you need to be committed to what you're doing, he says.

5. Play to your strengths. "Your skills, talents and expertise are transferable" to other types of jobs and industries, he says.

6. Look out for yourself. "The cavalry is not coming....and things might be getting worse."

7. Remember what's important. For a long time, Americans worked to get things, Gardner says. It's time to focus on what really matters -- family and friends.

8. Any progress is progress. "Baby steps count, too, as long as you're moving forward," he says.