A Focus on Sustainable Building in Providence, R.I.

When architect and developer Peter Gill Case hired architect Joe Haskett at his Providence, R.I., firm, truth box, in 2008, the pair had plans to build sustainable office buildings. But as the economy slowed, they found there wasn't a market for new office space, green or otherwise, on the scale they had intended.

Graduates of the Rhode Island School of Design (RISD), the pair shifted their thinking by using prefabricated shipping containers as their medium. They built 12 energy-efficient office units, 11 of which are currently leased.

"The reaction to them has been more positive than I expected," Haskett says. "Providence can have a certain conservatism. There's a lot of historical preservation here. I have been surprised."

With the success of the project, cleverly called Box Office, the team started thinking about ways to expand their sustainable concept. "The idea is to use a single module that could land anywhere in the world and be operational within the day," Haskett says.

To do that, they submitted a grant proposal through a joint program with RISD and the Rhode Island Center for Innovation and Entrepreneurship (RI-CIE) at Brown University. Funded with $150,000 in federal money from the 2010 appropriations bill, the pilot program encourages sustainable building development while keeping creative sustainable thinkers in the Ocean State. 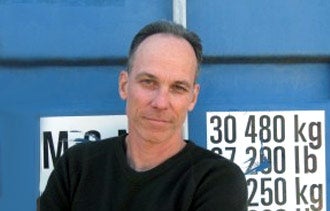 Out of 50 proposals, Case and Haskett's was the unanimous choice for the grant, says RISD Senior Critic Peter Dean, one of the RISD professors leading the collaborative pilot project. Students in an advanced interdisciplinary design studio look at ways to use the shipping container architecture in new, sustainable projects. Case and Haskett critique the student work while receiving small business and economic development assistance through RI-CIE.

"Peter and I looked at this like going to business school," Haskett says. "The access we get to people who have written business plans and know how to do these things is invaluable."

The coursework will also prove invaluable for RISD students who want to apply their sustainability in real-world workplaces, as well as for the city of Providence. In 2009, the city started branding itself the "creative capital"--part of an effort to keep its academic brain trust local.

"We know this is not a panacea to solve all problems," RISD's Dean says. "There are a lot of things that are not in place to smooth the transition from college to a job. But this is a real effort to retain creative people in the community. There are long-term economic benefits to that. It is just like a company wanting to retain its best employees."