By Shira Lazar January 23, 2012
Opinions expressed by Entrepreneur contributors are their own. 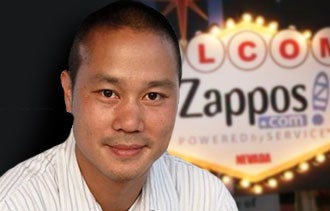 At the Consumer Electronics Show in Las Vegas earlier this month, while many were partying on the strip or schmoozing at the convention center, I was lucky enough to hang out with Tony Hsieh, the CEO of Zappos.com.

These days, when the "Delivering Happiness" author isn't fending off hackers like those who recently lifted personal information from 24 million Zappos.com customers, he is attempting a takeover of his own -- of Sin City, that is.

Though he is in the midst of building his company's corporate headquarters out of Las Vegas's existing City Hall, Hsieh -- always looking to innovate -- isn't satisfied. As is, the city doesn't have the amenities like yoga studios, bookstores and galleries of his company's current home in Henderson, Nev., nor does it have the cultural vibrance of San Francisco, Zappos's former home.

So like the uber entrepreneur he is, Hsieh is hoping to build it. As chief pioneer behind the Downtown Project, a group dedicated to the rehabilitation of Las Vegas, he wants to make the area more livable and a hot spot for entrepreneurship.

"We're actually hoping to revitalize the entire area, to create everything you need to help you live, work and play within walking distance," Hsieh says, adding that he wants "downtown Vegas be the most community-focused large city in the world."

To that end, Hsieh is putting his money where his mouth is. He recently gave $2 million to the Smith Center of the Performing Arts. And he helped fund a community tech library and co-working space called "/usr/lib," which recently opened.

Hsieh has also launched a multi-million dollar fund to invest in startups that will be based in downtown Vegas too. The fund has already targeted investments into products ranging from an app-controlled iPhone robot called Romo to tech journalist Paul Carr's digital publication.

In the end, Hsieh hopes his efforts will pay off in many ways. Beyond setting up shop in Las Vegas, which offered Zappos a more favorable tax treatment, he expects that by making the city more livable it will be good for business and help him attract and retain top-tier talent.

Further, he adds: "Zappos can learn from cities on how to be more innovative, scale our culture and scale productivity. Once you have that then the magic just happens."

I might be biased, as I'm a friend of Hsieh's. But I think what he is doing is pretty inspirational. Watch our video interview below where he describes Return On Community, or ROC, as the new ROI: