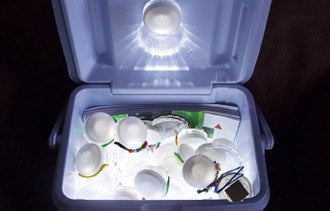 Flash of genius: Linda Pond and her co-founders have sold 136,000 FAB Lights so far.
Photo courtesy of the Fab Light

Linda Pond didn't have the funds she needed to build the FAB Light--an LED light for coolers, toolboxes or tackle boxes--which she and four partners dreamed up during an evening softball game. What the Ottawa, Ontario, entrepreneur did have was a rough prototype of the product and a professional relationship with a local engineer.

To finish developing the lights, Pond struck a royalty arrangement with that engineer, Steve Carkner, CEO of Ottawa firm Panacis, agreeing to pay him a portion of sales once the product hit stores. By deferring product development costs, Pond saved approximately $60,000, which allowed her to funnel the $40,000 she had into patent fees, product materials and travel.

Pond and her co-founders have sold 136,000 FAB Lights since 2008, through stores such as Target and Walmart. The team has also participated in the Canadian startup-financing reality TV show Dragons' Den and this year plans to begin direct sales of the product to corporations for use as promotional materials.

We talked with Pond recently about the bright idea that financed her FAB Light.

How did you get your engineer to defer payment?
I said, "I don't have any money to pay. What can we do?" And he looked at me and said, "Well, I really like this idea, and probably more important, I like you. So what I'd like to do is work on this for nothing, and we'll figure out a royalty arrangement for when it hits the market." He saw the potential from the beginning and he wanted to be part of it. He not only did the electrical design, but he subcontracted the industrial design, which is the look and feel of the FAB Light. Both of them worked probably for a full two years as we were getting it up and running.

Twenty-five cents per piece sold [after the distributor's cut] went to my company, and then we broke it down into cents per piece for the remaining four partners. The electronics engineering company took the majority share. They started in at 40 cents per piece. As the volume of pieces sold went up, the royalty went down. So it was a sliding scale.

Did you use a lawyer for this agreement?
I did not. I set out from the beginning to really try to work with people that we trusted and to keep those lawyer costs to a minimum, because we didn't have that kind of money.

Are you making a profit yet?
Not yet. The FAB Light retails for $10 Canadian ($9.83 U.S.). The distributor takes the lion's share. The secret sauce in doing an agreement like that is to sell a whole bunch.

Besides giving up a cut of profits, what's the downside to paying royalties?
It took quite a bit longer to get to market, because the engineer had paying customers, so he took those first. And the royalties are paid from now until ever, so that is something. I'm OK with that, because we never would have gotten it off the ground without those people involved, so I'm happy to compensate them.

The upside to working with royalties is that you don't have debt, so you're not incurring loans that you're stressed to pay once you finish getting the product out there. Although a little bit of pressure to sell isn't bad, either.

What advice would you give to others considering a royalty structure?
A lot of times people are just thrown together in a situation like this. In some instances, one person stands up and says, "Yeah, I want to work on that," and that's the only criteria that's used. So make sure that the people you're working with are the ones you want to hang on to.

Are You Going to Pawn? Don't Be Fooled: Use These Tips to Spot Fraudulent Shops

Are You About to Be the Victim of a Ponzi Scheme?