Paper Shower Looks to Clean Up 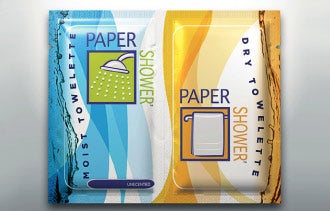 It all started because he was really sweaty. Dr. Jim Bahcall, an avid cyclist, spent his mornings biking before work, usually stopping at a local Starbucks in his hometown of Chicago to cool off. Then he would clean himself up using hand wipes.

One particularly hot and humid morning, Bahcall's method just wasn't cutting it. "Although [the wet wipe] is high in alcohol so it dries quickly, it just wasn't drying, and I felt so wet all over," he says. "I had to go into the bathroom and use a paper towel to dry myself off--that's when the 'aha' moment came. I said to myself, 'They should come out with a dry towelette along with this.'"

So about a year and a half ago, Bahcall--a dentist with a business background (he's launched three companies)--began research to develop a combination wet and dry towelette pack designed as a body wipe for people on the go. He aptly named his new product Paper Shower.

Jumping In
With the intent to ultimately get into the retail space, Bahcall wanted to first build credibility through online sales. Outsourcing manufacturing, patenting and graphic design, Bahcall stayed focused on building the brand identity.

"If you have a great product and you handle the customer support and distribution, the rest is just details," he says. "We didn't have to reinvent the [wet] solution. We perfected it to what we were looking for and added that dry towelette, which is the key component."

Though the product is niched within the wet-wipe industry, Bahcall says, he wanted to concentrate on selling to the sporting goods and mass-market industries. With his own money and financing from several partners, Bahcall initially put about $125,000 into his endeavor. He began producing small batches of the product, slowly increasing the volume first from 5,000 to 50,000, then to 100,000 wipes over the course of about 15 months. His website, PaperShower.com, officially launched in September 2011.

Staying Fresh
Last July, Bahcall got an e-mail from New York Jets trainers who were interested in Paper Shower. When players get hurt on the road, they're flown home quickly and given no time to shower; Bahcall's product provided the perfect solution. Paper Shower is now a staple in the Jets' NFL training facility.

The wipes began selling in retail stores early this year and are currently available at Sports Authority, Walgreens and Publix, as well as in nearly 100 mom-and-pop sporting goods and travel stores across the country. Paper Shower will also be in Dick's Sporting Goods, Nordstrom and Kroger/Fred Meyer grocery stores this year, and Bahcall is in talks with Wal-Mart and Target. The 9-by-12-inch wet and dry towelettes are priced from $7.50 for a six-pack to $46 for a pack of 54.

Spreading the News
Marketing efforts for Paper Shower include using social media, attending trade shows and handing out samples in cities like Chicago and Milwaukee. The startup also sponsors charitable events such as the American Cancer Society's 2011 Relay For Life in Chicago.

"I'm passionate about the product and getting it out there," Bahcall says. "We look at it like a spoke in the wheel, and every spoke is a different avenue of how to get the product out there. We don't have a multibillion-dollar advertising budget. Right now, grassroots marketing has gotten us going and given us lift." Paper Shower has also shipped products to disaster-relief businesses and the American Red Cross in New York.

Based on website hits and sales numbers, Paper Shower appeals more to women than men, Bahcall says, with about 60 percent interest coming from women. So far, Paper Shower has sold more than 100,000 towelette packs.

The Future of Wet Wipes
Bahcall attributes the growth of his company to its mass appeal and his love for entrepreneurship. "With the country turning green and more people biking and walking to work without access to showers all the time, there was really no solution out there," he says. "I feel with Paper Shower, every ounce of my experience over the last 15 years is flowing through this company."

Though eventually Bahcall wants to develop more products under the Paper Shower brand (think jumbo towelettes), he's staying focused on one product for the time being.

"Get one product out there, get footing in the marketplace and continue to build," he advises. "I don't see this as a fad product, I see this as a trend toward where wet wipes are going. We're trying to appeal to everybody in the wet-wipe market, one dry towelette at a time."