6 Tips on Innovation from 'Treps in Emerging Markets

By Navi Radjou, Simone Ahuja and Jaideep Prabhu May 15, 2012
Opinions expressed by Entrepreneur contributors are their own. 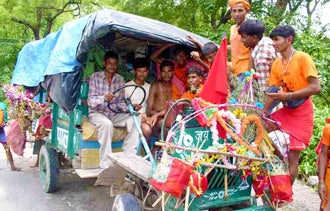 "Jugaad" is a Hindi word that loosely translates as “the gutsy art of overcoming harsh constraints by improvising an effective solution using limited resources.” It's a unique approach to innovation and it's how entrepreneurs are driving exponential growth in emerging markets like India, China, Brazil and Africa.

Jugaad is an antidote to the complexity that characterize emerging markets, with all their mind-blogging diversity, pervasive scarcity of all kinds, and exploding interconnectivity. Consider that India alone adds 10 million cellphone subscribers each month.

This highly resource-constrained and chaotic environment in emerging markets motivates local entrepreneurs to practice the art of jugaad to create products and services that are extremely affordable and highly sustainable.

The jugaad mindset that Hande embodies is also becoming relevant for entrepreneurs and small businesses in Western economies striving to grow in an increasingly complex and resource-constrained business environment. Unlike the traditional innovation approach with its time-consuming and expensive research-and-development processes, the fluid jugaad approach helps you innovate faster, better and cheaper.

Jugaad can be distilled into six guiding principles, which any entrepreneur can adopt to innovate and grow in a highly volatile and hypercompetitive environment:

1. Seek opportunity in adversity. As a modern-day alchemist, learn to transform adversity into an opportunity to innovate and bring value to your organization and your communities. Hande, for instance, faced extreme adversity in the early stages of SELCO as many Indian rural customers, who earn $1 to $2 a day, couldn’t afford the up-front costs of buying and installing solar lighting systems. Undeterred, Hande improvised a new pay-per-use business model that proved to be highly successful.

2. Do more with less. Optimize the use of scarce resources while delivering high value to more of customers. Avoid reinventing the wheel and reuse existing technologies and networks. Take MicroVentures in the Philippines, cofounded by Bam Aquino. MicroVentures is making a wide range of consumer products and services accessible to consumers at the base of the socioeconomic pyramid. Rather than setting up its own distribution network -- a costly and nearly impossible task in highly-fragmented underdeveloped and underserved markets -- MicroVentures leverages an existing ad-hoc logistics network made up of about 800,000 mom-and-pop stores called sari-saris spread across hundreds of villages.

3. Think and act flexibly. Constantly question conventional wisdom and keep all options open so you can respond quickly to unexpected changes. Chinese appliance maker Haier found out that many farmers across China routinely use its washing machines to clean their vegetables. Sensing a big market opportunity, Haier developed a washing machine with larger pipes that could also handle vegetables. The product was a hit among farmers.

4. Keep it simple. Rather than over-engineering your products, provide customers with “good enough” solutions that are easy to use. Recognizing that physicians in emerging markets had no use for bulky, hard-to-use ultrasound machines, GE’s engineers developed Vscan, a portable ultrasound machine that is as compact and simple to use as a cellphone. Vscan has been a big success in both emerging markets and developed countries.

Related: What You Can Learn About Innovation from Amazon, Starbucks and USPS

5. Include the margin. The U.S. middle-class, due to its dwindling purchasing power, is feeling economically marginalized. Like Hande, start creating “value for money” products that are affordable and accessible to the growing numbers of U.S. low-income consumers. For example, PayNearMe helps the 24% U.S. households who have neither a debit nor a credit card to buy on Amazon, purchase bus tickets on Greyhound’s website, or pay by cash offline at a 7-Eleven outlet. It’s worth noting that about 60 million Americans are either unbanked or "underbanked."

6. Follow your heart. Logical thinking can only take you so far. Rely on your gut intelligence and innate empathy for customer needs to innovate breakthroughs that disrupt entire industries. For instance, Kishore Biyani, founder of Big Bazaar, one of India’s largest and most successful retail chains, did not use management consultants to validate his idea of launching retail stores that look, feel, and even smell like chaotic street bazaars. He trusted his intuition more than any analysis to conjure up an innovative retail model that is hard for rivals to replicate.

By practicing these six principles of jugaad innovation you will be able to generate breakthrough growth in today’s complex environment.