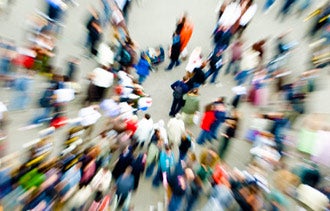 For an increasing number of startups, crowdfunding is a way to get their companies off the ground when traditional avenues, such as a bank loan, are not an option.

Crowdfunding is a way to raise money by getting small donations from a large number of people, and sometimes the end result is big. For example, the Pebble watch that synchs with your smartphone raised over $10 million on crowdfunding platform Kickstarter.

Wondering if your business idea would be backed by a crowd of investors? Consider these three traits of successful crowdfunders, according to by Brian Meece, the CEO and co-founder of RocketHub.com, a New York City-based crowdfunding platform.

1. An intriguing, clear story. One reason that people give you money is because your story touches people, so you need to be able to express very clearly what you are trying to do and why it is significant.

"Crowdfunding is built around relationships," says Meece. "It is a very human phenomenon."

You have to be willing and prepared to put yourself in front of the crowd of investors and connect with them directly, through a video or photos. Meece says potential investors need to see enough of your passion to think, "Wow, I want to be a part of it."

2. An existing network. The process of crowdfunding depends on trust and reputation, so you'll need a core inner group to vouch for you and and help spread the word.

"Every successful crowdfunding campaign has an immediate first-degree network that jumps into that campaign," Meece says.

But this doesn't mean you need to have thousands of Facebook friends, you just need at least a small group that is willing to step out on your behalf to get it going.

"No one wants to be the first one dancing on the floor in middle school," says Meece. And investors have the same sense of hesitation: they feel better donating their own money when others have already, too.

3. Cool perks. In exchange for their money, you'll need to offer investors a reward, whether it's a sample, the ability to vote on how a product is designed, or an opportunity to get early access to a product or service before it hits the regular markets.

Also, you'll want to offer multiple levels of perks to provide an incentive for a broader range of contributions. RocketHub's most popular donation level is $20, but the average is about $75. And then there are the once-in-a-lifetime donations: "We have had strangers give $10,000 to campaigns. Crazy, absolutely crazy," Meece says. "You have to have those higher price points there."

Readers, have you used crowdfunding before? If so, what was your experience?