Orbotix: Where Mobile Apps and the Toy Industry Collide

Consider the ball. It's a toy to children, rolling prey to dogs and a crucial instrument to athletes.

But for Ian Bernstein and Adam Wilson, the 28-year-old founders of Denver-based Orbotix, it's the pinnacle of robotics and a prime example of how smartphones will one day interact with the world. 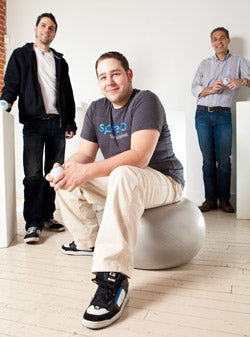 Orbotix released its first product, the $130 Sphero, in December 2011. A grapefruit-size orb that connects to iOS and Android devices via Bluetooth, Sphero is, simply, the world's first smartphone-controlled ball. Dreamed up by Bernstein, a robotics whiz, and Wilson, a software hacker and Bluetooth master, the device consists of motors, processors, gyroscopes and accelerometers, which propel it; LED lights, which change its color; and a sturdy polycarbonate shell that can withstand a 6-foot drop onto concrete.

A variety of apps let users drive, fling, putt and roll Sphero anywhere within a 50-foot range. Another, Chromo, turns the ball into a type of 3-D controller that interacts with a game on a user's handheld device. The Orbotix team believes Sphero has the potential to be a gaming console unto itself, like Xbox.

But that only scratches the surface of its potential. To push things further, Orbotix created a software developers' kit so that others can build apps for the device. Internet videos of users' creations abound, such as one showing the Sphero with theremin-like musical properties.

After watching his 11-year-old play with Sphero, Mark Solon, managing partner of Highway 12 Ventures, wanted in. Brad Feld, managing director of Foundry Group, says the company combines "two things we look for: an amazing product and people who are obsessed with it." (Both Solon and Feld have joined Orbotix's board of directors.)

CEO Paul Berberian met Bernstein and Wilson through the famed TechStars program. "If something needs to be made, they make it," he says. "They're not afraid of any piece of technology." To date, the startup has raised more than $6 million.

The plan now is to refine the hardware platform, create and sell innovative games and see what evolves at the intersection of the $20 billion mobile apps space and the $80 billion toy industry. "It's a blank slate," Berberian says, noting that they've even been approached about using the technology to position airplanes on aircraft carriers. "It's a sign of what's coming."

SkyLight: This adapter allows images from any microscope to be transmitted securely via mobile phone.

Inventables: An online hardware store for DIY manufacturing that helps designers, artists and inventors source the materials they need for innovation.

Lytro: This revolutionary camera uses light-field technology to capture images in such fine detail that users can focus and zoom in or out after taking the shot.

Xaxxon Technologies: The Oculus turns any laptop into a remote-controlled telepresence robot.

Ridekick: Bike to work without the sweat. This electric trailer turns your lowly ride into a kickin' motorbike that can reach speeds of 19 mph.

Liquipel: Ship your phone to the HQ in Santa Ana, Calif., and they'll give it a virtually undetectable water-safe coating--without hindering performance.

Blu Homes: These green, modular homes are economical to ship and quick to set up. A 3-D configurator lets customers design their dream homes online.