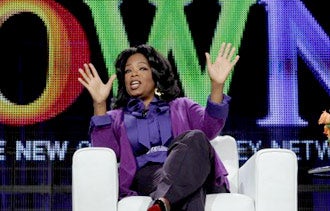 In recent weeks, startup educator Susan Schreter has been asked by students, friends and entrepreneurs about the struggles of Oprah Winfrey's OWN network. This is her reply.

Devoted Oprah Winfrey fans know to look at life's problems as positive opportunities to learn something new and then share the wisdom with others.

About 18 months ago, in partnership with Discovery Communications, Winfrey launched a new television network called OWN: The Oprah Winfrey Network. I like the name of this network. From an entrepreneurial standpoint, going out on your own means taking full ownership of everything that goes right, plus everything that goes wrong.

So what can startup entrepreneurs learn from OWN's first months in business? Here are five teachable moments to help you startup and persevere with confidence.

1. Moonlighting creates madness. It's OK to plan a startup while employed by another company. However, it's not ever wise to initiate customer facing operations without 100 percent leadership attention and focus. Little problems easily morph into big, costly ones when the top decision maker isn't on hand to make timely adjustments.

Winfrey has stated publicly that she regrets launching OWN while “The Oprah Winfrey Show” was still on the air. Her big “ah-ha” moment reflects the simple truth that one jockey can't ride two horses at the same time. It's simply too easy to fall and too hard to win.

2. Brand consistency matters. After watching OWN's first few months on the air, viewers who were passionate about the Oprah brand of self-respect and personal enrichment say they were confused. OWN wasn't Oprah. Actually, OWN's celebrity-filled reality programming looked more like that of competing network Oxygen or an episode of “E! True Hollywood Story.” There was nothing empowering about watching Tatum O'Neal's childish spats with her father or Duchess of York Sarah Ferguson recounting her self-inflicted financial and personal mishaps.

When first customers don't know what a startup's product or service really stands for, they won't come back. Even worse, they might share their disappointment with their friends.  If OWN is to succeed, it has to create a brand identity and programming that is perfectly aligned with Oprah -- or entirely separate from Oprah.

3. Make it great. Today Winfrey has to inspire her team to be even better than their best. They have to be innovative, imaginative and completely original in order to capture lasting audience attention. Copying what works at other networks or revisiting the ghosts of “The Oprah Winfrey Show” won't be enough for OWN to achieve entrepreneurial greatness. Delivering something that is really new and noteworthy is the only way any entrepreneurial initiative -- a startup network or a corner bakery -- can win lasting market share against competitors.

4. Spend like a startup. Startups close when they run out of cash or run out of investors who are willing to fund bloated operations. I bet in the early days of Winfrey's Harpo Productions Inc., first-class travel, expensive meals, employee bonuses and indulgent office digs were a reward for profitable financial performance, not a necessity.

When startups spend money on nice-to-haves before attaining key milestones of financial sustainability, they needlessly increase operating losses, business uncertainty and employee finger-pointing. It's a toxic environment that takes away all the joy of collaborative business-building.

OWN has already announced significant spending cuts. That's a good start for improving the chances of startup survival. Still, I wonder -- has OWN cut out all the nice-to-haves and engaged people who thrive in a barebones startup business environment? Have you in your new business?

5. Adversity is not failure. OWN is too early in the business development cycle to be called a failure. It's normal for nimble startups to test and adapt first ideas based on audience feedback. Some concepts work; others don't. The point is to learn from first missteps and continue to search for the sweet spot where a new business can operate in a sustainable way.

It's also completely expected that all startups will face their share of unexpected problems. Customers don't commit as quickly as planned, investors and partners back out of funding deals, websites crash, employees quit, and, of course, nervous competitors float negative rumors about the new market entrant. All of this is part of the early life of a startup.

Digging deeper
Will OWN ultimately succeed? The odds are good that Winfrey has what it takes to succeed as a serial entrepreneur. In my classes, I like to point out that unlike just about every other entrepreneur on the Forbes list of 400 wealthiest Americans, Winfrey didn't have any help from venture capital funds and the public financing markets to propel her first company's growth.

Winfrey built Harpo and her fortune the old-fashioned way -- she funded growth through savvy business deals and cautious cash flow management. Would the founders of Google, Microsoft, Starbucks, Facebook or Amazon.com be as rich as they are today without early investment capital? It's hard to say, but their ramp-up would not have been as swift.

Winfrey should get a lot more credit in business schools and entrepreneurial education incubators for her skill in making something big and influential out of her own operating resources. Maybe that's the bigger lesson of OWN 2.0. More riches and satisfying rewards come to entrepreneurs who face adversity by digging down deeper to discover their own entrepreneurial magic. You can, too.