How to Quit Your Day Job Gracefully

Congratulations! You've decided to leave your job and hang your own shingle. But first, there's much to consider. You'd probably like to stay on good terms with your former employer. You may have signed a noncompete agreement. And it wouldn't hurt to take some customers with you. Here's what you need to know to navigate the transition from working for someone else to being your own boss.

After working at the same salon for eight years, Seattle aestheticians Stephanie Carroll and Heather Allison decided to open a skincare studio of their own. It's not uncommon for beauty professionals to retain their clientele when they jump ship, but Carroll and Allison were intent on doing so without burning bridges.

Six months before their departure from the salon, the pair began quietly collecting contact information from nearly 300 clients. After securing a lease on a storefront in which to operate their own business, they gave notice, offering to stay three weeks but settling with their boss on two. Only then did Carroll and Allison share the news of their new business, Deity Skin Care, with clients who came in for appointments. 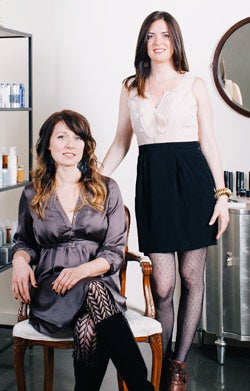 "We weren't really loud about it," Carroll says. "We just let them know this was the last time we'd be seeing them at [the salon] and that we'd be opening our own space." At the end of their tenure, the duo sent "Opening soon!" notices to the client list they'd assembled. When they were ready to open their doors in June 2012, they followed up with a coupon offering clients 30 percent off their first Deity appointment.

Not only did Carroll and Allison retain about 65 percent of their customers, they also managed to stay on good terms with their ex-boss. "It took a couple of months for the transition, and then everyone was friendly," Carroll says, adding that she has seen her former boss socially and that Allison still patronizes the old salon.

But making the leap from trusted employee to friendly competitor isn't always as harmonious. You may have a noncompete clause, a boss who doesn't take the news of your resignation well or former clients wondering where the heck you went. Here's how to keep your professional relationships intact when navigating the rocky path from direct report to top dog.

Embrace transparency.
When it comes to leaving a company that will soon be a competitor, a little honesty goes a long way. "There's a mistaken feeling that somehow this needs to be done covertly," says Andrew Flake, a partner at Atlanta law firm Arnall Golden Gregory.

Play It Safe
You're more likely to get an employer's blessing if you play by the rules. Legal experts recommend these guidelines.

• Don't compete with an employer while still on the payroll. Wait until you're a former employee, even if you didn't sign a noncompete agreement.

• Don't use company resources to develop your new business. This includes office space, computers, phones, tablets, e-mail accounts or anything else the company owns or rents. Plan your business on your own time and equipment.

• Don't phone it in during your last couple of weeks. Give your final projects the same level of dedication you did during your first week on the job.

• Don't walk away with anything. Leave behind company hard drives, mobile devices, e-mail lists, trade secrets and anything else that isn't yours.

Of course, Flake adds, you don't want the news that you're leaving to get out prematurely, but you also don't want to drop an 11th-hour resignation bomb in your boss's lap and sneer, "By the way, I'm taking these clients with me." Instead, give as much notice as possible and remain cooperative during the transition. Most important, if you signed a noncompete agreement, tell your employer you intend to honor it, says Lynne Curry, CEO of management consulting firm The Growth Company in Anchorage, Alaska. "Let that person know that you want to maintain good relationships and good standing," she says.

That's what co-workers Peter Selber and Nick Altman did when they left their jobs in 2011 to open Infinity Power Partners, a Houston-based energy-management and consulting firm. "We didn't want to trick anyone," Selber says. The duo thanked their managers, told them they'd enjoyed working at the company and said that although they planned to open a similar business in the same market, they would honor their three-month noncompete. "They understood the opportunity we had, and they didn't stand in the way," Selber says. "They were very supportive--as much as a competitor can be."

Read the fine print.
Many professional service companies--creative agencies, technology providers and financial planning firms--require staff to sign contracts that restrict them from becoming a competitor for a period of time after leaving.

"Always look at what the noncompete agreement says," advises A. Kevin Troutman, a Houston-based partner at law firm Fisher & Phillips. "If it defines what you can and can't do, that's going to be your guiding point." Contrary to popular belief, many businesses take legal action when an employee violates a noncompete agreement, and the courts do enforce them, Troutman adds.

Flake suggests revisiting your employee handbook, too. Pay particular attention to policies that prohibit you from sharing company secrets and prevent you from conducting personal business on company equipment and time. Also check the relevant state employment laws. You may need to hire an attorney to help you navigate what's kosher, particularly if you have questions about the meaning or validity of your contract.

That's what Mario Ochoa did when he and a co-worker quit their public relations jobs in 2010 to open Sammis & Ochoa, a PR firm in San Antonio. "I think we dropped $800 to consult with the lawyer and have a couple of letters drafted," says Ochoa, who received a cease-and-desist letter from his former employer after several clients said they wanted to move with him to the new shop. "That $800 probably saved us a lot of court costs."

Renegotiate if you can.
If your noncompete agreement overreaches, try negotiating a shorter time frame or smaller geographic region. Although exceptions may apply, in most jurisdictions the courts may consider a contract overly broad and not enforceable as written if it restricts you from competing with a past employer on a national level or for more than two years, Troutman says. With any luck, your employer will see the wisdom in striking a compromise. After all, Troutman points out, "litigation is expensive."

You also may have some leverage if you're starting a business that's related but doesn't directly compete with the services your employer offers. "There may be some cooperative work and referrals that can happen," says James Grove, who chairs the employment-law practice of Cleveland law firm Nicola, Gudbranson & Cooper. "So it may be in the employer's best interest to trim down that noncompete."

Noah Rosenfarb can attest to that. He left his position as partner at a CPA firm in 2007 to open Freedom Advisors, a wealth-management company in Boca Raton, Fla. Because Rosenfarb's former employer didn't offer the same type of service, he convinced the company to prune his noncompete agreement considerably. "What I negotiated was, 'Let me go to my existing client base and say that this is what I'm doing,'" he says. In exchange, he agreed to refer clients needing CPA services to his former firm and avoid marketing himself to any of the firm's clients with whom he didn't already have a relationship.

Wait to compete.
Sometimes the only option is to wait out your noncompete. But that doesn't mean you have to sit idle. "You can prepare to compete," Troutman says, noting that your employment contract and state laws will usually dictate how and when you can do so. In many states, for example, you can form a corporation during the noncompete period so long as active competition is not commenced during employment, according to Grove of Nicola, Gudbranson & Cooper. You also can work on your business plan, as long as you don't tell customers what you're up to.

Infinity Power Partners' Selber and Altman played this waiting game for 90 days until the noncompete they had with their former employer expired. "There was no website, because you're competing if you've got a website up," Selber says. "There were no marketing materials. There were no business cards." Former clients and suppliers had no idea where they'd gone; they just knew that the two had resigned.

Only when their noncompete ended did the pair reach out to their more than 150 former clients, painstakingly reassembling their contact lists from memory, their smartphones, the internet and business cards. "We didn't walk away with anything when we resigned," Selber says. "All we took were personal belongings."

The risk paid off: When three months later Selber and Altman flipped the switch on their new business, former customers were thrilled to hear from them. "We estimate that we were successful in retaining about 90 percent of our old clients," Selber says. The company quickly hit its year-one revenue goals, contracting more than seven figures worth of business in its first year.

As for how he handled the transition, including those three months in solitary, Selber has no regrets. "We negotiated that, and we were going to honor our word," he says. "Making money's great, but there's a right way and a wrong way to do business. Being honest was key. I think it helped us in the long run."