Essential Elements of Working With a Business Partner

When Bryan Burkhart and Sonu Panda launched their New York-based subscription floral service H.Bloom in 2010, they spent every working moment together.

"We went to the flower market at the crack of dawn, interviewed every type of potential hire and drove a ZipCar around Manhattan to figure out how to scale deliveries," says Burkhart, CEO. "We needed to learn the ins and outs of the business together so we could set the direction of the company together."

As the business took off, though, the founders realized they also needed to work independently on various tasks so they could build the company on multiple fronts simultaneously. Today, Panda runs the day-to-day operations, directing engineers, buyers and managers of H.Bloom's five regional markets; Burkhart focuses mainly on sales, marketing and investor relations. 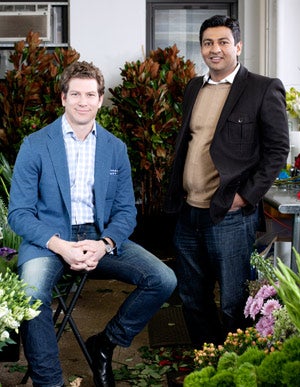 "We have a clear division of labor and discrete roles and responsibilities," Burkhart says. "[Panda] does much of the work that is grueling and detail-oriented, things that I find extremely painful but are integral to our success. But we had a very honest discussion upfront about how we would think about splitting up the workload and making sure we were both OK with it."

Having a co-founder is great when it comes to sharing the grunt work, holding late-night planning sessions and perpetuating a sense of camaraderie. But once a business is up and running, it can be complicated to determine who should do what, who shouldn't do what and where the buck stops. Divvying up duties is important to avoid duplicating efforts, to work more effectively and to play to each founder's talents. "You need to look at the experience, strengths and styles of each partner and apply them to the needs of the company," says Joni Fedders, president of Aileron, a Tipp City, Ohio-based nonprofit that mentors private businesses.

Divvy It Up
There's a clear delineation of responsibilities for Jonas Falk, CEO of Chicago-based healthful school-lunch provider OrganicLife, and his business partner, Justin Rolls. "I hadn't filed tax returns in five years, but Justin has paid his taxes quarterly since he was 18 years old," Falk says. "He's very paperwork- and detail-oriented, and I can't stand paperwork; I like to focus on the creative things. But each of us having different strengths is what makes our business successful."

"Kirsten is a night person, and I'm a morning person," Ripple says. "But it's a positive thing, because she can do follow-ups in the evening on things that may be urgent, and I can do the same in the morning. Embracing our differences brings depth and perspective to the business."

Flexibility is key, even when duties are clearly defined. At times dividing lines must be blurred for the good of the company. For example, partners should be prepared to work their personal connections when necessary, regardless of whether the task at hand falls under their purview. "Sometimes our duties are based on the function, but sometimes it's the relationship that matters, and you both have to know it's OK to cross over when situations like that arise," says Ripple, who stepped aside from her typical functions when an influential advisor felt more comfortable working with Lambert, with whom there was a previous relationship.

There may be times when founders reach an impasse on a task no one wants to tackle. Fedders suggests compromising on a rotation--i.e., "You take it this year, I'll take it next year." If you and your co-founder absolutely can't agree to share the undesirable jobs, consider enlisting outside help.

Ripple has turned to others for functions ranging from web design to merchandising and sustainability. "Don't be afraid to outsource where there are gaps in knowledge," she says. "When we wrestle with something, getting help from an outside expert is definitely worth it."

Make It Official
Even though job descriptions may seem obvious, Fedders says it's a good idea to officially clarify individual responsibilities among all involved, particularly in high-level areas of operation. "Instead of just saying, 'Is sales your responsibility or my responsibility?' go deeper and ask if that person is also responsible for the selling structure, compensation and new client acquisition," she says. "The greater the clarification, the better off you are."

She recommends utilizing common organizational tools, such as a good, old-fashioned org chart. "Just get it down on paper in some form," she says. "'Here are the areas of responsibility you're taking; here are the ones I'm taking,' and then include a breakdown of all tasks that fall under those categories."

Keep Communicating
It's also essential to connect regularly--not just for accountability, but so each founder has a complete picture of how the business is evolving. In an expanding company, though, individual workloads can make that harder than it sounds.

When H.Bloom launched, Burkhart and Panda had plenty of time to talk shop. But that changed when they expanded into Washington, D.C. "He was so focused on keeping the lights on in New York and I was so focused on trying to turn the lights on in Washington that we lost that connection," Burkhart says. "We weren't communicating as frequently, and therefore we weren't on the same page about direction anymore."

The two resolved to schedule quality meeting time together every week--breakfast, dinner or sometime in between. Other entrepreneurs would do well to follow their lead, Aileron's Fedders says. "When you have your own individual responsibilities, that constant communication takes time, energy and effort, but that's what it takes to stay strong together," she says. "If you don't, it can wreak havoc on your organization."

A common thread among successful partnerships is that they're based on shared core values about the business and a mutual conviction that its success trumps everything else. "We both care a lot about food and everything that goes into it, and serving people--and those shared beliefs are what lets each of us trust the other and his judgment to do his own work," OrganicLife's Falk says. "Stuff comes up 100 times a day, every day. If you have to spend any time wondering what your partner is doing or bickering about who's doing what, you're never going to have a business."

Adds H.Bloom's Burkhart: "Even if we run into disagreements, we know we both care so deeply about what we're doing that at the end of the day, we trust one another to go off to our separate roles and responsibilities and make it happen better than anybody else we know."

The Deciding Factor
Working with a co-founder comes with challenges. Whether it's dividing responsibilities, agreeing on a pace for expansion or plotting other strategies, decision-making is surely near the top of the list. "Decision-making obviously becomes slower in a partnership, because now you have someone else you have to run the decision by," says Joni Fedders, president of business consultancy Aileron. "That complicates things, because we all have different perspectives, different expectations and different styles."

When hashing out who should and shouldn't handle certain responsibilities, it can be helpful to create a framework of core values and principles for co-founders to consider when making decisions. "The more you can clarify these," Fedders says, "the better it helps your decision-making process." Sample questions might include: