By Kathleen Davis April 29, 2013
Opinions expressed by Entrepreneur contributors are their own.

An entrepreneur's path is rarely a straight line, a lesson lifestyle icon Martha Stewart has learned firsthand. From her early career as a model to her time as an institutional stock broker on Wall Street, to starting and running a small catering company -- Stewart used lessons from both her successes and failures to transition to each phase of her career.

Following the success of her catering business, Stewart published several books on entertaining in the 1980s, and eventually launched her publicly traded media and merchandizing company Martha Stewart Living Omnimedia. Her international brand now includes books, magazines and TV shows that reach nearly 66 million consumers and over 8,000 branded products in thousands of retail stores, according to the company. 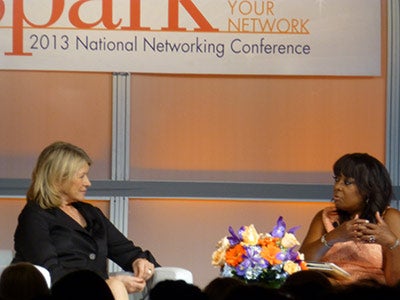 On Friday at the National Association of Professional Women's National Networking Conference, Stewart spoke with Star Jones, former co-host of The View, about her career trajectory, her outlook on success, and why she wants to keep working until she's 150.

Here are four lessons from Stewart on how to stay relevant, no matter what stage your business is in.

1. Be a life-long learner. "You should never retire; you shouldn't even use the word," Stewart said. "It implies going off into the sunset, and who wants to do that?" She pointed to career second acts such as parlaying a passion for gardening into a horticulture business. "There's always something else you can do," she said.

2. Seek inspiration everywhere. Take note of your surroundings, and always be on the lookout for new talent, said Stewart. She scouts out potential artists to feature in her magazines at events like the Smithsonian Craft Show. She also finds inspiration for new products everywhere, and even multi-tasked during the interview. The flower arrangement on stage sparked an idea for a pattern in her bed-sheet collection, she said.

Related: 10 Inspirational Leaders Who Turned Around Their Companies

3. Define what work-life balance means to you. Stewart makes no distinction between her personal and professional lives. "My life is my job, and my job is my life," she said. For an entrepreneur whose personal brand is her business, living and breathing work may be crucial for her success, but Stewart acknowledged that it won't work for everyone.

4. Keep going. Despite facing very public obstacles, including her 2004 trial and time spent in federal prison following an insider-trading scandal, Stewart keeps a positive outlook. "I've never hit a bottom, just bumps in the road," she said. Ever the epitome of her brand, Stewart said she never tries to distract herself from her problems. Instead, she seeks opportunities for inspiration, such as gardening, when times are tough.