Most people start their professional lives working fast-food jobs or retail gigs, but Darian Shirazi isn't most people. At age 15 he began purchasing computer components in bulk from Asia and marketing them on eBay, generating such impressive sales that the online auction giant soon offered him an engineering internship. After two summers at eBay, Shirazi began exploring other opportunities, and in 2005 he became the first-ever intern hired at Facebook, then a fledgling startup whose dozen staffers worked close to Shirazi's family home in Palo Alto, Calif.

"They were guys not that much older than me, working on something I thought was cool," Shirazi recalls, admitting, "It wasn't clear to me if it would become anything big or not."

Shirazi exited Facebook after two years--his parents insisted he leave to attend college--but by that time it was clear big things were in store not only for the social network but for him, too. He dropped out of the University of California, Berkeley, within a year, and after traveling the globe returned to Silicon Valley in 2008 to launch San Francisco-based Fwix, a hyperlocal news aggregator that trawled the web to curate a range of business data encompassing everything from license registrations and Yelp reviews to Facebook likes, Twitter posts and Foursquare check-ins.

Fwix built its business by licensing information to media publishers and software developers, but Google had bigger things in mind. "Google wanted to prioritize our local business data for lead generation," says Shirazi, now 26. "I thought, That sounds like a great idea. Why don't we build our own business?" So he turned down Google's $35 million acquisition offer and in spring 2012 rebranded Fwix as Radius Intelligence, leveraging his massive local database to provide real-time information optimized for sales teams targeting the U.S. small-business market.

"It was easy to walk away from [the Google offer]. I got lucky on Facebook, and it helps when you've had a win and don't have to worry about money," Shirazi says. "A lot of people haven't been lucky enough to be part of something like Facebook. But I also believe that if you're in a position to build something big, you have to make that happen." 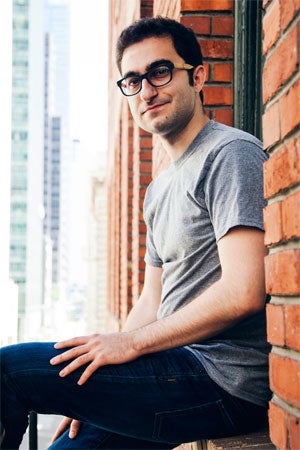 Shirazi is definitely thinking big with Radius, stating that he aims to build a sales intelligence platform for the SMB segment on par with Dun & Bradstreet's information services for the enterprise market. Radius offers sales teams insight into more than 26 million small businesses in the U.S., compiling data from disparate web sources to identify opportunities across new and established companies, as well as delivering advanced lead-generation tools as stand-alone SaaS offerings or integrated with Salesforce.com services.

"What we're offering is a huge opportunity for marketing and selling organizations to become more efficient by letting them target businesses that need their products and services," says Shirazi, who serves as Radius' CEO. "We're also helping improve relationships with existing customers and reduce call spam. To me, we're building a business, but we're also doing a lot of good."

Earlier this year Radius wrapped a $12.4 million funding round led by American Express. Shirazi, who would not disclose revenue, plans to triple the firm's sales force by the end of 2013, concurrently exploring new and more effective methods for crunching data and developing, filtering and categorizing leads.