Football is a complex sport, with millions of options for each run or pass play. For coaches, the biggest challenge is in finding the time to dream up new strategies that will work from year to year. That's difficult enough when you're a pro, but it's an almost insurmountable task for the part-time coaches in the high-school, small-college and youth-league ranks.

This inspired former NFL assistant coach Charles Coiner to launch FirstDown PlayBook DropBack for middle-school, high-school and college teams, and FirstDown PlayBook Youth, a simpler version for younger leagues. The DropBack app, currently limited to iOS devices, has a database of more than 5,000 plays--many used in real-game situations by Coiner over his career, which spans 27 years and includes stints with the Buffalo Bills and Chicago Bears, as well as at the University of North Carolina. "In many cases, the app is saving these [coaches] considerable amounts of time," Coiner says.

In 2009, when the Bills purged their coaching staff, Coiner found himself out of work but armed with 17 boxes of binders stuffed with an estimated 10,000 plays sketched out on paper. He took his boxes and moved to Austin for an extended break from the sidelines. His plan: digitize the plays so they would be easier to search through during his next coaching job. 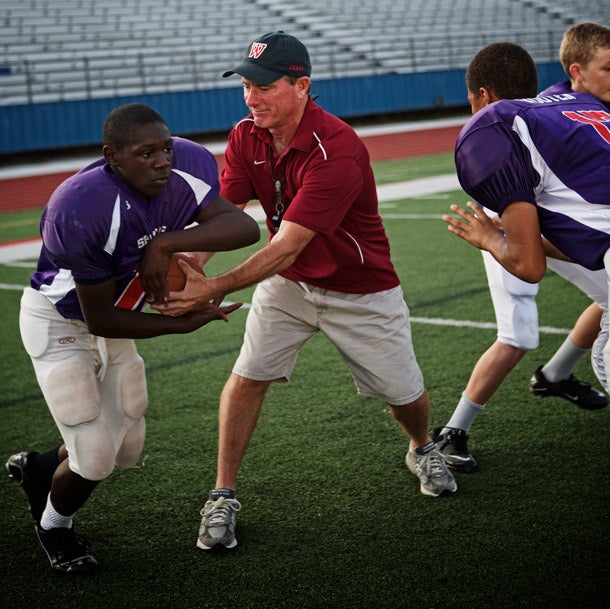 About halfway through the months-long scanning process, a software-developer friend suggested that Coiner turn the project into an app. Soon after, Coiner hired Austin-based Clarus Agency to build what would become FirstDown PlayBook DropBack and founded parent company 1st Down Technologies in 2011. The app charges $1.99 per month for access to Coiner's vast playbook.

At last check this past summer, Coiner counted more than 37,000 devices running the app. One customer, Robert Walker, head football coach at Conroe High School in Texas, describes the plays as "useful" to him but believes the app's best role is as a teaching tool for newbies. "It's great for younger coaches and middle-school coaches who want to study the game and learn," he says. And Coiner's customer base bears this out: Half his revenue comes from the Youth app.

Coiner, who estimates he's thrown more than $400,000 into the venture, is looking for angel investors to fund the addition of more offensive schemes to the app. "Believe it or not, there's quite a bit of room to expand in this market," he says. "As sophisticated as pro football might seem, the reality is that most coaches are still drawing up plays using pencil and paper."