Turn Your Company Car Into a Marketing Campaign on Wheels

Talk about a fruitful investment. Mason Arnold relishes the attention he and his com-pany garner around Austin for driving a vehicle with a big banana on the roof. In turning people's heads, he has turned a company car into a rolling conversation starter, brand fortifier and revenue generator.

"It's the best marketing thing we've ever done,"

Arnold says of the vehicle, one of three fruit-topped Toyota Prius hybrid cars operated by his 8-year-old company, Greenling, an organic-food delivery service.

Arnold couldn't be happier with his decision to purchase a company-owned Prius and top it with a $3,000 epoxy-coated, aluminum-and-Styrofoam banana emblazoned with the company's web address. "For every dollar we spend on the banana car, we probably get $10 to $20 in return," he says, citing a survey of new customers who signed up as a direct result of seeing the vehicle, which runs about $600 per month in operating costs.

Even without a supersize piece of produce, a wisely chosen company vehicle can be a productive and versatile investment. The car Tom Turner was seeking for his legal e-discovery/tech company, DSi, didn't have to be fast, but it had to be easy to park, with enough cargo room to haul boxes of documents around downtown Nashville, Tenn. The one he ultimately chose, a $14,000 CitEcar Electro Bubble Buddy, can be described as something between a golf cart and a delivery van; it's an electric-powered utility vehicle that plugs in overnight to recharge, eliminating refueling downtime. Even better, the small vehicle can be parked on sidewalks or in vacant spots that are too small for a typical car.

The savings on fuel and parking come out to roughly $1,700 a year. And thanks to a $7,500 tax credit from the federal government for green vehicles, and the IRS' mileage deduction, Turner expects the CitEcar to pay for itself within three years and then actually start making money if he takes advantage of the mileage write-off.

Like Arnold's bananamobile, Turner's vehicle doubles as a marketing tool. "We periodically get calls from attorneys who have seen it when they're walking around downtown," he says. "It has also been great for branding. People see it and associate us with being technologically advanced and environmentally conscious, which is the message we're trying to reinforce." 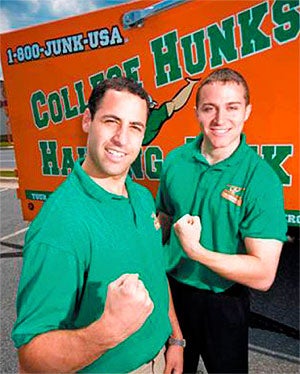 As a company's image evolves, its vehicle needs change, too. After years of making do with a borrowed, beat-up cargo van, Nick Friedman, president of Tampa, Fla.-based College Hunks Hauling Junk, wanted a new vehicle that screamed "successful" and "professional." Friedman and his business partner decided to lease a new Range Rover when they began franchising their concept in 2008.

"We used it for meetings with high-end commercial prospects and with the early-adopter franchise owners who invested in our brand," Friedman says. "We wanted to show them we weren't just a couple of college guys with a truck, but a national brand. It's about the image you want to give to prospects, clients, employees and investors."

Today, College Hunks Hauling Junk has more than 140 franchise units. Did the Range Rover help? Friedman can't say for sure, but he knows it didn't hurt.

Back in Austin, Arnold believes image is everything when it comes to a company car. The only downside to Greenling's bananamobile? Low-hanging parking structures. But as Arnold points out, not many business owners get to say, "I need 8 feet of clearance for my banana."