How Blind Smartphone Users Helped This Startup Test the Waters

It was midnight in London when Ioannis Verdelis got the call from his co-founder Kostas Eleftheriou that gave him the insight for how to take on his company's biggest competitor.

During the conversation, Eleftheriou explained how their product had a true, life-changing connection with their target demographic -- blind people.

While presenting at their first demo in 2012 in front of a visually-impaired audience, people were moved to tears using their product Fleksy, a mobile application that allows people to use their phones without looking at the device. It was the first time many of these people experienced a product that is designed to help them forget their disability.
It was this news that inspired Verdelis to give it his all, no matter what he was up against.

While aspirations were high, the then 27-year-old co-founders faced considerable challenges. Among others, they had no funding and little experience disrupting a competitive mobile text-input market.

Still, their past milestones did help prepare them. Verdelis and Eletheriou had always known they wanted to start something together but needed to find the perfect opportunity.

Despite becoming fast friends during college, the two ended up parting ways after graduation with Verdelis taking up a consulting job in the United Kingdom and Eleftheriou moving to California to start a new venture. While living miles apart, both shared the same frustrations with their smartphones: It was hard to type text messages and emails on them. Deciding that this was the opportunity they had been waiting for to collaborate together, the two kicked into action.

The pair began chatting over Skype a few days a week about starting a business with their prototype. That lead to in person meetings. And then, as Fleksy started to gain momentum, Eletherious convinced Verdelis to pack up and move to California. 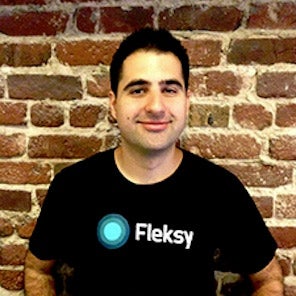 Ioannis Verdelis (pictured) and Kostas Eleftheriou, the co-founders of Fleksy, introduced their hands-free messaging app to a group of people who could give them key feedback: blind people.

Related: How Niche Players Can Compete Against Big Brands

They demoed early versions to friends and family and were surprised with the positive results.

"It was important for us to have a prototype because we didn't have to explain anything, we could just show them," Verdelis recalls.

A prototype, alone, wouldn't be enough, however. Verdelis and Eletheriou realized that even in the most fortunate of cases, they would not be a million-dollar company overnight. It was going to take years of struggle, hard work and resilience.

So, they broke their vision into smaller, more tangible pieces -- starting with their target market. Instead of going after the hands-free loving public at large, they chose instead to focus on the niche market of blind and visually impaired people.
"As you break down the big target into smaller targets, you're refining your idea, learning and measuring progress along the way," says Verdelis.

An added benefit: This decision put their product in the hands of people that would help them know how to develop it even better. The test market of blind people isn't huge, but it wound up being big enough to provide revenues to continue adding features and proving the product's need in the marketplace.

As a result of their testing and strategic scaling, on day one of their launch in the AppStore, they were the third most downloaded app worldwide in the "productivity" category in iTunes. To date, they've raised $3.9 million in funding from prominent angel investors and VC firms including Kleiner Perkins Caufield & Byers, Highland Capital Partners and Middleland Capital.

They now have plans to roll out a version suited for the mainstream market by end of year.

Sarah Green is a social entrepreneur and consultant dedicated to economic empowerment through entrepreneurship around the world. Green has been acknowledged by President Obama for her work as a young leader in entrepreneurship in America. She has also been named one of 100 "Global Leaders of Tomorrow" by the St Gallen Symposium in Switzerland and named as a 2013 Top 99 Under 33 Foreign Policy Leader. Green's work as an entrepreneur has been featured in prominent media outlets including Forbes, Entrepreneur, Inc.com, MSNBC, ABC, Yahoo! Finance and Fox Business.