With technology changing at a rapid pace, the thought of tomorrow and all the tomorrows after it can be hard to process. Scary, even. For Brian David Johnson, the resident "futurist" at Intel, however, the prospect of what tomorrow will bring is thrilling.

"What I tell people is No. 1: they shouldn't be worried about the future," Johnson said at The Feast social innovation conference in New York City. "The future is going to be awesome because people build the future. Technology doesn't get to decide. People get to decide."

Projecting the future, or future-casting, is the work of combining social science, research, technical data, economic trends and, yes, even science fiction, to model a prediction of the future. In his position at Intel, Johnson looks specifically at how humans will interact with technology 10 to 15 years out.

To hear Johnson tell it, he has always been a futurist, even before landing his gig at Intel 10 years ago. Johnson, whose father was a radar tracking engineer and mother was an IT specialist, was teaching computer courses at a community college in Manassas, Va., by the time he was 10. He worked on interactive television in Scandinavia and the U.K. before the Internet existed, developing technology to give viewers the option to vote and buy things on their television monitors. Johnson has also directed movies, written books and is an acrylic painter. It is his combination of technical expertise and affection for storytelling that make Johnson uniquely qualified to be a futurist. 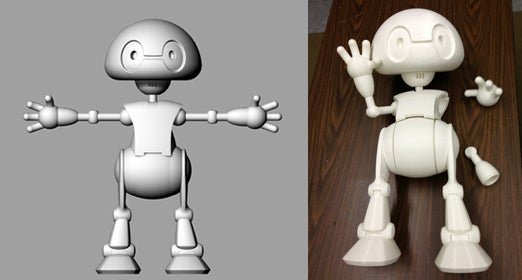 Jimmy the robot being designed and built.
Image courtesy: Intel

Related: Your Next Cocktail Could Be Concocted By This Robotic Bartender

On the micro side, computers will be inserted in all manner of health-care related devices, says Johnson, dreaming up a Band-Aid that has a computer chip built in. "We can actually monitor our health on an hour-by-hour, minute-by-minute basis," he says. For instance, if a child has the flu, then a stickable computer embedded into a Band-Aid will allow a parent to monitor a child's temperature, blood pressure and heart rate.

From a macro perspective, Johnson says that the computational powers available a decade from now will allow us to build more sophisticated, nuanced and larger cities – what Johnson calls megacities. "We can actually put computation in the infrastructure of the city so that we can make the city not only greener but more efficient," he says, referencing innovations that could prevent the waste of electricity and water from cracks in building architecture. "Our cities could become computers and when our cities become computers we can tune them," he says.

As Band-Aids and cities become computers, so too will some of our companions, says Johnson. His favorite technical gadget, in a manner of speaking, is Jimmy, his walking and talking robot. Jimmy is a 3D-printed robot, "born" about a month ago, with open-source code, available for updates, personalization and iteration. There are two other "Jimmys" in various stages of production currently: One in Portland, Ore., and two in Boston. A prototype for a 21st century robot, Jimmy represents a first step toward social robots.

Related: How Google, Apple, Facebook and Others Use Your Personal Data (Infographic)