Jenna Schnuer
November 8, 2013 5 min read
Opinions expressed by Entrepreneur contributors are their own.

In a recent interview with The New York Times Sunday Book Review, author Donna Tartt said “I’ve always got a dozen books going, which is why my suitcases are always so heavy.”

I understand. I’m a fickle reader, always reading one (or three) but with my eye on a dozen others. I’m all about the backups.

But since I did tire of having an aching shoulder from schlepping said books around, I made the switch some time back to traveling with, mostly, digital books. Yes, a trade paperback or two usually makes its way into my carry-on (paper smells so good and I hate the thought of going without) but, other than that, e-books it is.

That took a lot of pressure off my shoulder but it didn’t ease my bank account’s pain. Since going e-book, my book shopping habit has gone a little crazy. (See? I don’t even take responsibility for it. It’s the book shopping’s fault.) Now that I can shop around-the-clock and up in the air for books, the receipts from e-book sellers fly in at all hours. I decided that Scribd’s online subscription service, sort of a Netflix for new and backlist books, was worth a tryout.

Scribd’s promise: Subscribers pay $8.99 a month for an all-you-can-e-read buffet of books (ranging from a major publisher’s catalog to self-published volumes), brochures, catalogs, and other content from the site’s 6 years as a free document sharing site. Read the books on your computer or on your tablet or phone with the Scribd app. Have a WiFi-only device? No worries. You can store the books right on your tablet, no connection necessary. 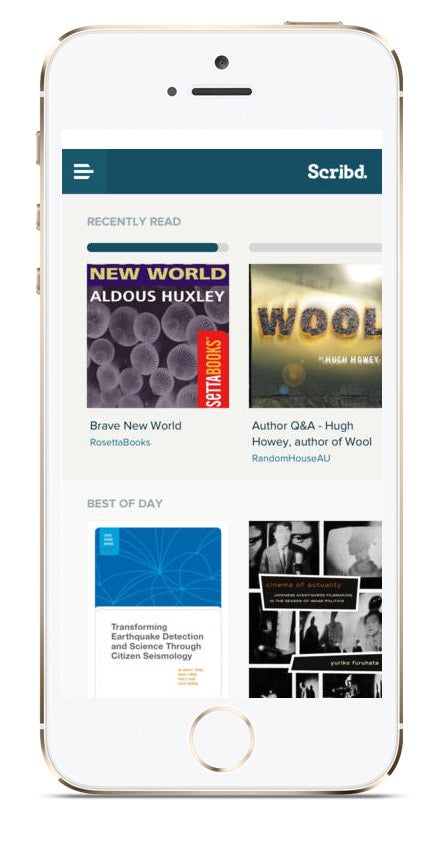 Our reality: Overall, I was pretty impressed. For less than the price of buying one new book a month (e- or otherwise), you can wander through more than 50,000 books. Most are older titles, however. So, as of late October, I could re-read Donna Tartt's stellar first novel, The Secret History, but had to go elsewhere for her new The Goldfinch. It feels a lot like the online borrowing service most public libraries offer but with one big bonus—you don’t have to wait for somebody else to check back in one of the few copies. That’s a good thing for those of us who change what we’re reading with every mood, and don’t like to wait.

When reading on Scribd.com, you can scroll through a book’s pages or choose the more, um, traditional e-book flipping pages method. On iPad and iPhone, you can tap or flick your finger on the screen to flip pages. Books appear pretty much as you would see them on page. Charts, graphs and words were totally readable, something that’s not always the case on e-reading platforms.

Signing up is a fairly quick process, and the company offers steps to suggest books you might like—from both classic and modern business books to fiction (literary and otherwise) and plenty of cookbooks. Really, there’s a lot there to keep a reader busy. You can build to-read lists and, best of all, save your place in case you want to pick up on your phone where you left off on your computer.

Now to the problem. They just have one major publisher signed on: HarperCollins. To be fair: the service is new, new, new, and launched just over a month ago. But while HarperCollins publishes a lot of books, having one publishing house leaves Scribd feeling a bit like a house organ. As you wander through the books, it's pretty much all HarperCollins. So no dipping into Made to Stick, by Chip and Dan Heath, while waiting for a train or any Malcolm Gladwell during a last-minute bit of book browsing before the flight attendants tell you to power down. A little weird but, hopefully, that will change soon. Though I haven’t heard back from Scribd yet on the who’s-signing-on-next-front, they’ve done some interviews recently that make it clear that, yes, they’re working on it. So I’ll cut the service some slack. But if I hit a month where I don’t want even a single book that they have on offer (which, really, I doubt since HarperCollins’ Agatha Christie offerings could keep me very happy on flights for the next year), I’m out.

Travelers should keep in mind that it’s still an e-service so … that means powering down for takeoff for now until new FAA changes take place (likely by the end of the year). So, yes, I’ll still have to tote a paperback everywhere I go or, at least, until somebody puts out a satisfactory paper-scented perfume.

The Four Bs of Planning a Successful Conference for 2021